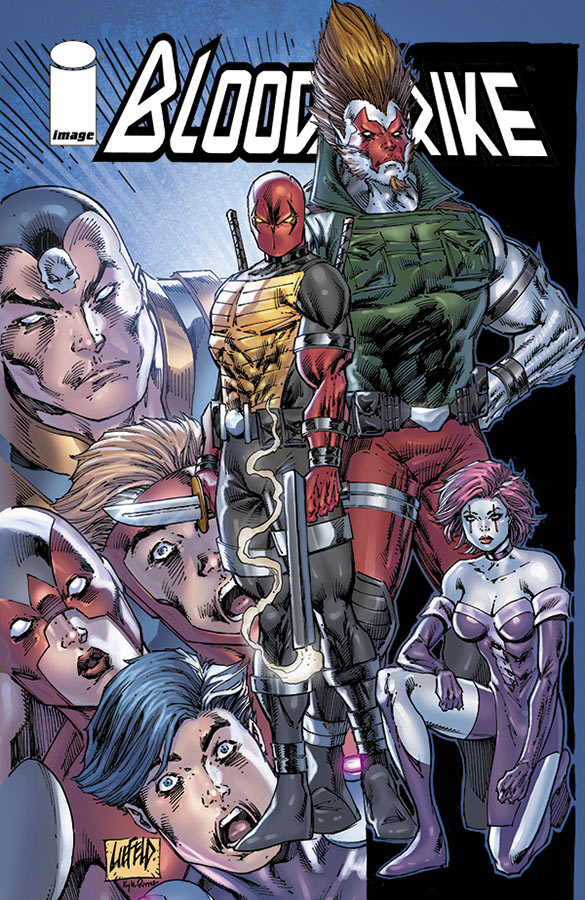 Comics auteur Rob Liefeld returns to one of his many teams that featured the word “blood” in them with “Bloodstrike” #1. Will Liefeld make “Bloodstrike” as relevant as when the team debuted came out in 1993? Considering I had to google that, I’m not too sure. Watch out for cock related spoilers below. 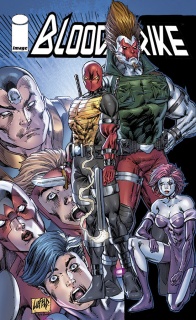 Written and Illustrated by Rob Liefeld

X-Force, Cable, and Deadpool creator ROB LIEFELD returns to comics with a new ONGOING series, a lively romp that reveals a more mature side to LIEFELD than fans have previously experienced. A new recruit to the Bloodstrike program (his identity as a mystery man from the historical Extreme Universe soon to be revealed!) struggles on a covert mission and loses his life as well as his junk to the mysterious TRAGEDY ANN!

Rob Liefeld has been a, uh, divisive figure in the comic book industry. Some rightfully credit him with inspiring the aesthetic for 90’s comic books. Others claim he can’t draw feet and tries to avoid drawing them. And while I hate to fuel the fires of that last claim, “Bloodstrike” does open with Not Deadpool strung up with some chains, the lower half of his body completely cut off. Can’t get more “hiding feet” than that. That first page actually does make a great visceral impression for “Bloodstrike”. An impression that’s ruined in the next page when Not Deadpool tries to bite off his own arm to get out of his bondage and his mouth is nowhere near the shoulder he’s munching on. If you were expecting a grand creative leap from Liefeld, then I’m sorry to disappoint you. But while the art itself might be filled with the cliches we expect, “Bloodstrike” actually happens to be one of Liefeld’s most personal works. Though I can’t say whether or not that’s on purpose.

“Bloodstrike” features a flashback where Not Deadpool mows his way through dozens of ninjas. When Not Deadpool is in his environment, bloody male-on-male violence, he is perfectly content. But as soon as a woman shows up, Not Deadpool is immediately overwhelmed and captured. Not only is his lower-half torn off, but his actual penis is scientifically detached and placed in a jar for the female villain to give to another female. In fact, Not Deadpool is so castrated that when Not Cable sets up a machine to regenerate Not Deadpool’s body, it can’t restore his wang. Insert a female presence into Not Deadpool’s life and he’s suddenly without power, both literally and phallically. Now, this could just be another crazy dick-fueled plot from a creator infamous for drawing impossibly huge guns but I think there’s so meting larger going on here. Call me crazy, but I think Rob Liefeld’s trying to talk to us about those Social Justice Warriors.

To understand “Bloodstrike”, you have to understand Liefeld. He created Deadpool, the most popular superhero of the internet and Ryan Reynolds movie in the making, without contributing any parts of Deadpool that made people like him. Liefeld founded Image Fucking Comics, a company that wants little to do with big gun big tit superheroes and more to do with “Sex Bastards” or whatever the newest indie sensation is. And that’s not even mentioning all the blogs and thought pieces dedicating to deconstructing the hyper violence and casual misogyny that were essential to his craft. Rob Liefeld used to be the king of tits moutanin until every single aspect of nerd culture turned their back on him. Rob Liefeld is lost, half a carcass strung up by some lady who stole his dick. And he wants, needs even, our help.

What’s brilliant about “Bloodstrike” is that it allows for contradictions, contradictions which let the reader know it’s a satire. Specifically, a satire on censorship. There’s a page where Bloodwulf, a muscular alien whose face never changes sits naked with some other naked women. Their only clothing is some tiny stickers covering their nipples. Naturally, that does little to censor the gratuitous scene, much the next few pages where Bloodwulf devours them and stands up with his majestic penis standing out. You can even see some nipples on their torn up bodies! The stickers on the nameless girls’ breasts aren’t just a cheeky attempt at being sexy. They’re a statement on the fragility of censorship, the hypocrisy behind covering up a sexual situation and letting a violent one go fully uncensored. Because otherwise, “Bloodstrike” just features a three page sequence where a naked alien just murders some nameless women. At the very least, it gave us the image of two girls with stickers on their nipples on a giant alien’s lap, all sitting patiently and smiling towards the camera. As real people do when it’s time to have group sex.

There will certainly be critics of “Bloodstrike” who insist that it does not have the capacity to be self aware. That it’s simply a 90’s creator cashing in a quick nostalgia check by indulging bad comic cliches everyone else has agreed to let go. But that implies a cynicism in Liefeld which simply does not exist. He is a man of pure idealistic energy who wishes to go back to a simpler time. And it’s because of you meddling SJWs that comics can’t involve more cock screaming.

Final Verdict: 3.3 – I wouldn’t call “Bloodstrike” a good comic on its own merits, but it is an interesting insight into the mind of Rob Liefeld and a cry against the modern culture of harsh political correctness and public shaming. I think? I’m really trying to justify why I spent money on a comic that was ostensibly about Deadpool’s big dick. Look at that final page! It’s the size of a woman’s head!