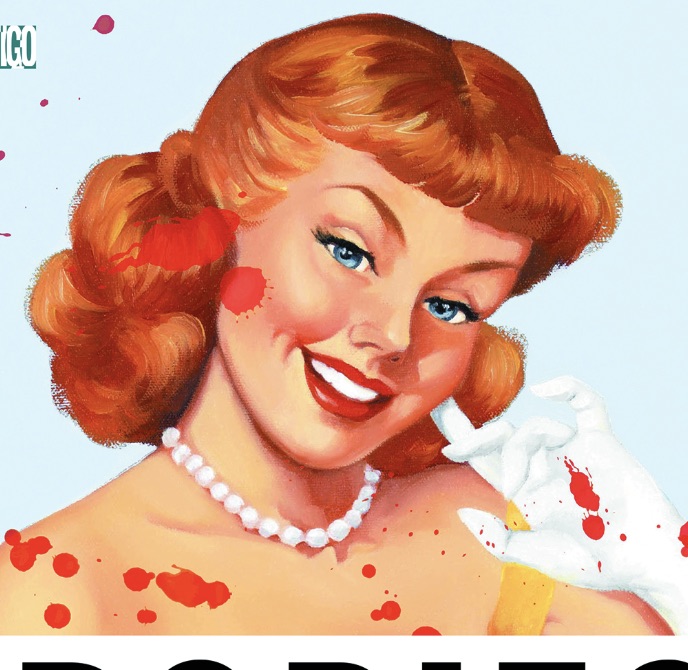 “Bodies” spanned 8 issues of mind-bending fun back in 2014 and 2015, and it’s high time we look back at such an ambitious work to see if it’s still successful a few years down the road. 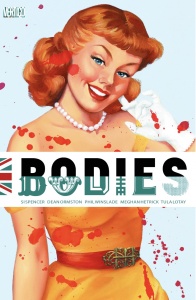 “Bodies” begins with a very simple premise: four time periods, four Londons, four detectives, one body. Turns out, it’s the same body throughout time, and then things get weird from there. The good kind of weird, though.

Reading “Bodies” in a post-Brexit world is interesting because of what Spencer has to say about London, urban living, flawed British patriotism and general pride in existing collectively. It’s a painful read at this point in time because of the optimism and holistic storytelling as compared to what’s come after, but it’s also important to reflect on the deep-rooted issues that haven’t gone away. “Bodies” tackles racism, homophobia, xenophobia, warfare and a slew of other themes in its blitz through an all-too-short 8-issue mini. It’s an insightful and strange look at what it means to be a British citizen in various time periods, as well as a startling look at what the future could bring. That timeline’s not quite a utopia – more like a gentler version of a Romero flick – but it’s also not quite the worst thing that could happen, considering all of society’s broken down. Spencer also works hard to make the four protagonists as different and engaging as possible, and is mostly successful.

The biggest ding against “Bodies” is that it’s one to two issues too short to pull off a flawless victory, though Spencer and the art team pack in a hefty amount of meaningful detail over 8 issues. With four different story threads running, each drawn by a unique artist, and a slew of symbolism to draw through each vignette, it’s easy to get lost in the minutiae and waste time trying to track down meaning when it’s buried, or there might just be none. Spencer keeps the story ticking along to nudge us away from drowning in significance, and the breadth and audacity of the story’s reach help root us where we need to be. Come along, “Bodies” says. We don’t have all day.

Visual symbols are clear, abundant and build intrigue and continuity, and the art is generally easy to follow and engaging. Edmond, Karl, Shahara and Maplewood all have distinctive and strong points of view, and each art style is both faithful to its time and to the character’s personality. Ormson’s tight line exposes Edmond’s fragility as well as the reigned-in nature of external life in 1890s Britain. Winslade’s line is a little looser and more boisterous to encapsulate WWII-era paranoia and the ever-present danger of the blitz, with a good deal of noir thrown in to amp up Karl’s criminal activities. Hetrick’s treatment of modern times is moody and clinical, with all the precision of a BBC police procedural and a hint of texture in shading and facial details. Lotay’s take on the future is cartoonish and soft, with a pencil-style line that helps communicate the total breakdown of Maplewood’s culture.

Loughridge is responsible for colors throughout the series, and manages to pick a palette for each time period that’s unique without fighting too hard against its counterparts. There are no jarring moments when we turn the page, and that’s quite an achievement for a book that has four stories running concurrently. Loughridge picks a sepia and gray-toned palette for Edmond’s time, a moody contrast of darker hues with bright fire tones for Karl’s perspective, a daytime drudgery set of muted colors for Shahara’s clinical reality and brighter, poppier colors for Maplewood’s weird future. The whole book meshes well, with a few tones drawn through for visual cues and continuity.

Sienty and Esposito are responsible for the lettering on the bulk of the series, and they pick a nice font with some sharp edges for the bulk of the main dialogue. Each character has their own distinct font and style for narration, and all of the sound effects fit their time periods very well. Of special note are the big booms of the explosions in Karl’s time in the first issue – they’re exactly the kind of high drama that works well in the medium, and are a good nod to EC-style crime comics. Edmond’s narration in particular is incredibly precise, contained and the embodiment of what an upstanding detective should be. So he wishes.

Spencer and the team’s jaunt through Britain’s collective consciousness is at times flawed – some of the jumps in plot are hard to stomach when the work’s not shown on the page – but ultimately successful, and more so because of what it dares to take on. Using a single catalyst or trickster archetype to push each character toward the truth at the center of themselves is a difficult sell, but Spencer knows what he’s doing and pulls it off. The best part of “Bodies” is that it’s not easily explained, especially at the end. We’ll have to take the feeling of unity, of something new born from the ashes of edifice, and go from there.

Or maybe it’s something that’s been there all along.

Final Verdict: 8.5 – “Bodies” is an audacious, unique and compelling story that holds together with four artists, good craft and a heck of a lot of imagination.