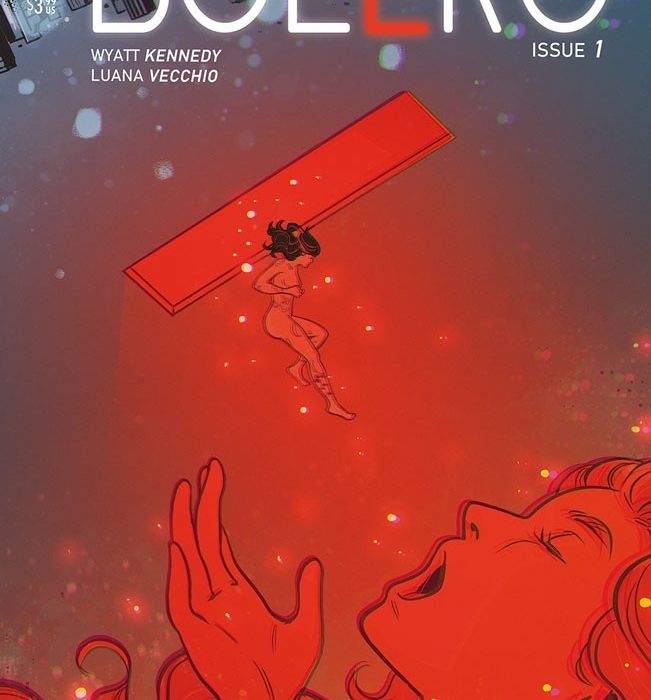 Bolero has been on our radar for the past few months. Why? Well, it’s impossible to predict lightning in a bottle, but sometimes you can put a few clues together that certainly make a story something to watch. In the case of “Bolero” #1, there were a few telltale signs: a committed dyad of artist and writer, a passion project years in the making, and modest credits that hit above their weight (Kennedy worked on a standout story in “Heavy Metal,” called ‘Something For You M.I.N.D.’. Vecchio’s work can be found in “Lovesick” and “Millarworld”). “Bolero” #1 is the first part of a five issue miniseries, and lucky for us each issue a little meatier than your usual fair. “Bolero” #1 clocks in at around forty-something pages. We’ll dive into the plot later, but in broad strokes, “Bolero” #1 is an intimate, extremely well-written post-love story that’s just getting started. 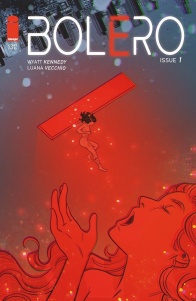 A new series from two bright-eyed and bushy-tailed little scamps! A woman running away from a broken heart discovers a mother-key into parallel universes. The rules are: The key can work on any door. The mother will only let you visit 53 universes. Do not ask to speak to the mother. Never hop more than 53 times.

Okay, from the tidbit above, we know that this story is going ass-sideways through the looking glass. 53 universes? Time jumping? Mother-keys? What does any of this mean? By the end of “Bolero” #1, we also don’t really have any idea; all we know is that breaking the rules results in devastating consequences. This is because the first three quarters of “Bolero” #1 read like any other coming of age love and love lost story — no fantastic elements, just flawed people putting in what effort they can to love one another. It’s a tried and true rubric, and that alone isn’t necessarily worthy of praise. Kennedy, however, has submitted much more than a phoned-in entry to the genre. On the contrary, “Bolero” #1 positively thrums, in large part as a result of Kennedy’s writing.

In comics, writing is often synonymous with characterization. This is certainly the case in “Bolero” #1. The story follows the nascent, pure love between Devyn and Natasha from high school to early adulthood. Devyn is an illustrator and apprentice tattoo artist. Natasha wants to be a film location scout — she love the idea of being paid to travel. The scenes depicting their early love are light and playful. They’re not overwritten, but we get a good idea of who Devyn and Natasha are. Their love feels both picturesque and believable, a California queer love story that seems attainable in the milieu of the the late 2010. It’s cute, it’s nice, and it’s a pleasure to read. These pages are covered in the wispy veneer of nostalgia, not just on a written level, but on a visual level as well. Vecchio slightly whitewashes these pages, giving them a light but aged look. We get the sense that we are looking back on something pure.

Devyn and Natasha’s story continues when they meet Amina Laviolette, the lead singer of Amina and the Panic Brothers, one of Devyn’s favorite local bands. They all become fast friends, and we get more scenes of simplistic beauty. The reason these scenes work so well in “Bolero” #1 is because they’re not overwrought or dripping with pathos. Young love stories often get bogged down with introspection of paeans of great import, so much so that the sunset’s spoiled before the sun even gets to dip behind the horizon. The uncomplicated love at the start of “Bolero” #1 is, then, a breath of fresh air.

Of course, by the time “Bolero” #1 gets to its third act, Devyn and Natasha have broken up under circumstances hidden to the reader. We guess that the dissolution of the relationship will undergird the rest of the story, but we’ll find out soon enough. Things blow up at one of Amina’s shows. She wanted Devyn in the crown to support her as she proposed to her boring, 2×4 plank of a bandmate. Devyn, however, gets unmoored by seeing Natasha at the venue with a new woman, and ends up drinking (thus breaking her sobriety) and sleeping with a random man in the parking lot — a tale as old as times. It happens to the best of us. During this sequence we’re served some great dialogue, a favorite line, uttered by Devyn as she realizes Amina has somehow fallen for her bandmate, being, “My best friend is marrying a pair of khakis!”

But enough on the plot — the illustration in “Bolero” #1 are just as strong as the writing. Vecchio works digitally, and the color work in this story is crisp and realistic. There’s not much else to stay on the visual language or style on that front, as the real power in “Bolero” #1’s illustrations are character depictions. In love stories, subtle movements and body language are important, and Vecchio has these covered. Both Devyn and Natasha look lovely and in love with one another, and distraught and disappointed when they are not. In the last portion of the story, when Devyn finds herself in an old warehouse turned extraplanar portal, the realism melts to surrealism. Vecchio proves herself skilled in this realm as well. Instead of drawing concert venues, tattoo parlors, and the vestiges of young love, she gives us talking cats, spider-gemstone monsters, and sulking shadows. It’s all quite fun. Speaking of fun, there’s also a fair bit of sex in “Bolero” #1, but it never feels yucky and is quite tasteful, if that’s something you think or are concerned about (the phrase “a sad cum” is used effectively in this story, we’ll say that much). Graham’s letters also add to the story’s cohesion. Words flow easy in “Bolero” #1.

Overall, this story has a lot of life to give. It’s sexy, it’s wistful, it’s sad, it’s enchanting, and we’re ready to see what happens next. Sometimes passion projects can be hit or miss. In this case, it’s looking closer to a home run than a strike out.

Final Verdict: 9.0. Cleverly combining the routine trials of young love with utterly unique takes on parallel universes, this story wows on all fronts.