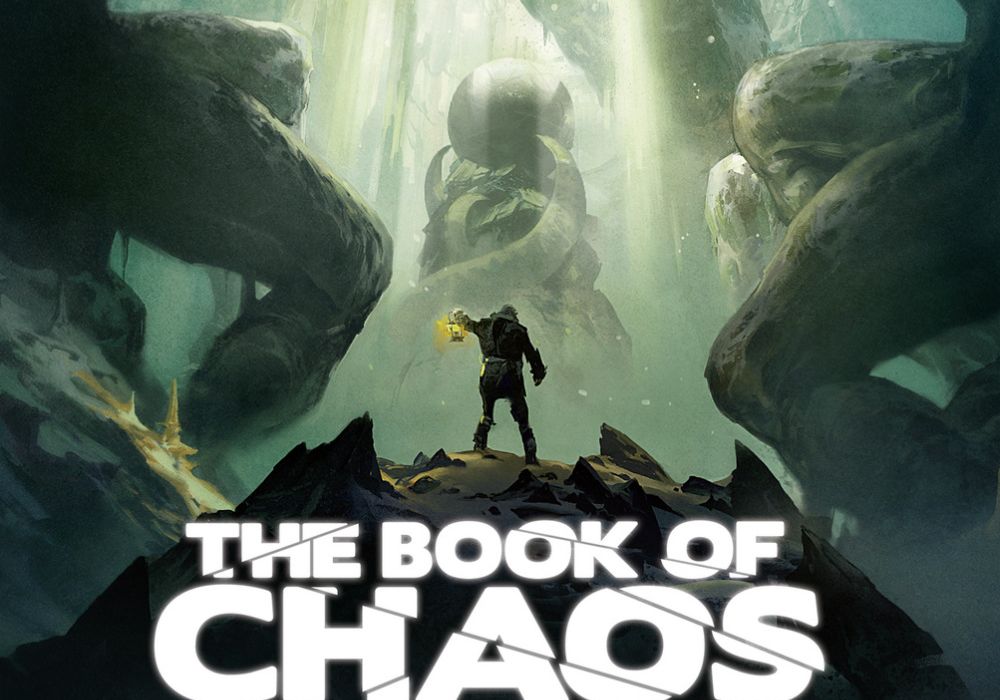 Collecting the four-volume French series “Ante Genessum” into one English language edition, “The Book of Chaos” is another example of Humanoids introducing critically acclaimed foreign language works to an English-speaking audience. Read our review for our thoughts on this compelling pulp horror tale. Our review contains minor spoilers 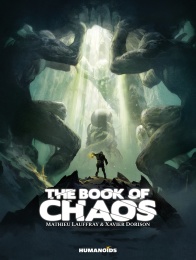 Written by Xavier Dorison and Mathieu Lauffray
Illustrated by Mathieu Lauffray
Archeologist Jack Stanton is the sole survivor of an expedition into the Himalayan mountains gone horribly wrong. Against all odds, he returns with proof of an advanced civilization that walked the Earth before mankind. A civilization of immense power, and incredible evil… Preparing for the book tour promoting his findings, he’s haunted by visions and attacked by a religious zealot warning of the dangers of his discovery. Dangers he doesn’t take seriously until a supertanker runs aground in New York and the catastrophe leaves him stranded in an infernal dimension. Could it actually be Hell? And if Jack is in Hell, what forces are now running amok on Earth?

“The Book of Chaos” joins a long line of pulp adventures that delve deep into the occult and bizarre, and harken back to a period of spiritual and literal exploration of the world around us. Back at the start of the 20th century, when archaeologists and explorers were still discovering new far off lands, and constant threats of war drove people in their millions to escapist fiction, pulp adventure stories had fertile ground to grow from. It’s arguably a foundation that all superhero fiction, and therefore all comics essentially, grew from. Cheap, disposable novellas designed to titillate and shock, ultimately disposable (hence being called ‘pulp’ for the cheap paper they were printed on.) It’s this history that “The Book of Chaos” not only mines for inspiration, but directly continues the traditions and tropes of.

“The Book of Chaos” is a one-volume adaptation of a French series called “Ante Genesum”, which translates to ‘Before Genesis’ and in the meaning here, ‘the Beginning of the End’. The first of four books that it has collected was previously translated into English as “The Prophet”, yet this is the first time the book has been released fully into English since its completion in 2014. “The Book of Chaos” is divided into seven chapters, giving it the feel of a real adventure saga rather than a graphic novel series, and there’s no denying that the structure is designed to be as engaging as possible through its use of timestamps to slowly unveil the present by slowly exploring the past.

It all begins with an expedition into an unknown region of the Himalayas, where months and years of research by men locked away in their studies, driven nearly to madness, have uncovered rumors of a civilization predating mankind by thousands of years. One of these men is our protagonist, Jack Stanton. Rather than be the dedicated scientist and pioneer at the edge of mankind’s steps towards the unknown, his interests are purely selfish. He wants the fame, the money, the girls, and because we consistently see things from his viewpoint, we’re constantly shown how much of a shallow person he is. He mocks those around him, he shamelessly writes and promotes a book that exploits this incredible finding the most sensational way possible. We even get to see explicitly that his dreams regarding this find revolve purely around self-interest.

This decision on Dorison and Lauffray’s part to make him the reluctant hero plays throughout the book and helps to ground the more fantastical elements that come into play. The simple fact is that he’s right: this is the most significant find in the history of man. It completely changes the very concept of our place in the universe on every conceivable level. What’s more, he sees himself as the dedicated scientist and pioneer at the edge of mankind’s steps towards the unknown. The dreams we’re witness to go so far as illustrating to him that the fame he seeks isn’t enough, which is all set-up to establish two things: first, that this significant find sets off a chain of events that somehow leads to him waking up in a world completely alien to him; and second, in this monstrous new hellscape he unwittingly becomes a ‘Chosen One’ figure to a group of natives, a group that see him as the being that will lead them to their Messiah and rescue their world from the darkness.

This is a smart narrative flip, as not only does it drive Stanton’s motivations through this new landscape, but it does so by forcing him to face the narcissistic opinions he has of himself. Now that everyone around him sees him as he has seen himself – namely, the Most Important Man in the World – he’s forced to acknowledge that he may be much, much less. It’s also a step towards uncovering the truth about the world around him and just how involved he is in its creation.

There’s an atmosphere throughout “The Book of Chaos” that’s positively Lovecraftian. The fear of the Unknown; an ancient, unspeakable evil on the rise; a world brought to the brink of insanity; almost indescribable horrors that mine the depths of human despair; all of these tropes make an appearance throughout the book. Likewise, there are elements of pulp adventure that form the backbone of the plot; a gung-ho adventuring archaeologist; strange new alien worlds with bizarre, threatening natives; a connection with a mysterious beautiful woman; as well as monsters and pirates and airships and dark caves and a twisted apocalyptic message that hums with foreshadowing and predictions about the world we live in.

The greatest contributor to this atmosphere is the art, which is truly beautiful. While the story comes from both Dorison and Lauffray, it’s Lauffray alone who’s credited with writing, art, and colors. The nature of the story demands an alien, nightmarish landscape filled with unimaginable beasts and demons, and dripping with a claustrophobic atmosphere. Lauffray surpasses all expectations with a wonderful dichotomy of grim, dark imagery and a gorgeously rich, deep color palette. The world that Jack Stanton enters is complex, intricate and bizarre, the very fabric of the world warped into unbelievable shapes and the structure of the landscape always designed to be hauntingly beautiful and unsettlingly unknown. Throughout his journey, our hero wanders through frozen tundras, barren wastes, and violent seas, yet it’s the twisted vision of a post-apocalyptic cityscape that haunts the most. Its monolithic skyline is demolished and jagged, surrounding the characters with looming skyscrapers at unnerving angles. Their journey through this demented uncanny valley marred by gigantic, nightmarish structures and worse, terrifyingly large demonic golems that rest silently over the rooftops like gargantuan gargoyles, adding a gothic element into the mix. What’s worse is it’s unknown which ones are statues and which ones are real, as the cast is perpetually hunted and tormented by a myriad of creatures ranging from demonic insects that skitter in the shadows in their thousands, to lumbering titans that rise from the depths of nowhere to obliterate their surroundings and present almost unwinnable scenarios.

Lauffray takes all of these concepts and crafts them terrifyingly well on the page. The festering horde of demons that constantly tail our protagonists are hidden in shadows and darkness, and the backgrounds are disturbingly ambiguous, leading you to see them everywhere. In contrast, the titans that show up burst from the panels in an explosion of chaos, always viewed from below to maximize their scale. The sense of scale throughout “The Book of Chaos” is something that subtly pervades the art throughout. Whether it’s Jack Stanton standing on a precipice, taking in the vast alien world in front of him, to the sheer size of the demons that threaten the characters, looming over them and making everything around them seem small. One of the better uses of this is right at the start of the book. The first image we see is two explorers, impossibly small in the center of a full page panel, gazing up at a monolithic archway in the Himalayas, the discovery of this impossible-made-possible that sets everything in motion. Once inside, we see an Indiana Jones-esque altar atop which rests a glowing artifact, but surrounding this are gargantuan crouching demon statues, a frightening glimpse of what’s to come.

Lauffray’s talent doesn’t just rest with the strange and nightmarish, and it’s to the book’s credit that his characterisations are strong and subtle, especially his facial expressions. There’s an exaggeration of form that adds to the action sequences, yet a lot of the narrative of “The Book of Chaos” rests on the readers exploring the developing character of Jack Stanton, who goes from an unlikeable, self-centered ass to a broken man that needs to rebuild in order to survive and fix the world around him. Lauffray achieves a delicate balance of cartoonish mannerisms and expressive features that convey all the emotional beats of the plot effectively. His style is reminiscent of Matteo Scalera or Sean Gordon Murphy, and the amount of imaginative design that went into the characters and the world they inhabit is something to be admired.

“The Book of Chaos” is a richly creative graphic novel and, coming in at over 200 pages, an excellently paced pulp adventure that draws you into the mystery of exactly what this nightmare hellscape is and how anti-hero Jack Stanton is involved. It pulls on a series of sci-fi horror tropes and Lovecraftian imagery to craft a compelling story about finding your purpose and the consequences of your actions, especially of those actions are purely self-involved. It’s a gripping story that never verges into the truly terrifying, but instead relies on a claustrophobic sense of unease and, through gorgeously realized artwork, a sense of truly insurmountable and all-invasive evil. Fans of occult horror, pulp adventure stories, and novels about the inadequacy of man against unspeakable, ancient evil will love this book, and it’s a great ambassador for the rest of Humanoids translated works, providing a gateway to a whole new world of previously unattainable works.

Final verdict: 8.0 – A compelling pulp tale with dark Lovecraftian imagery, The Book of Chaos is pure sci-fi horror that engages throughout with gorgeous art and complex characters.

“The Book of Chaos: Deluxe Edition” will be released on April 26th