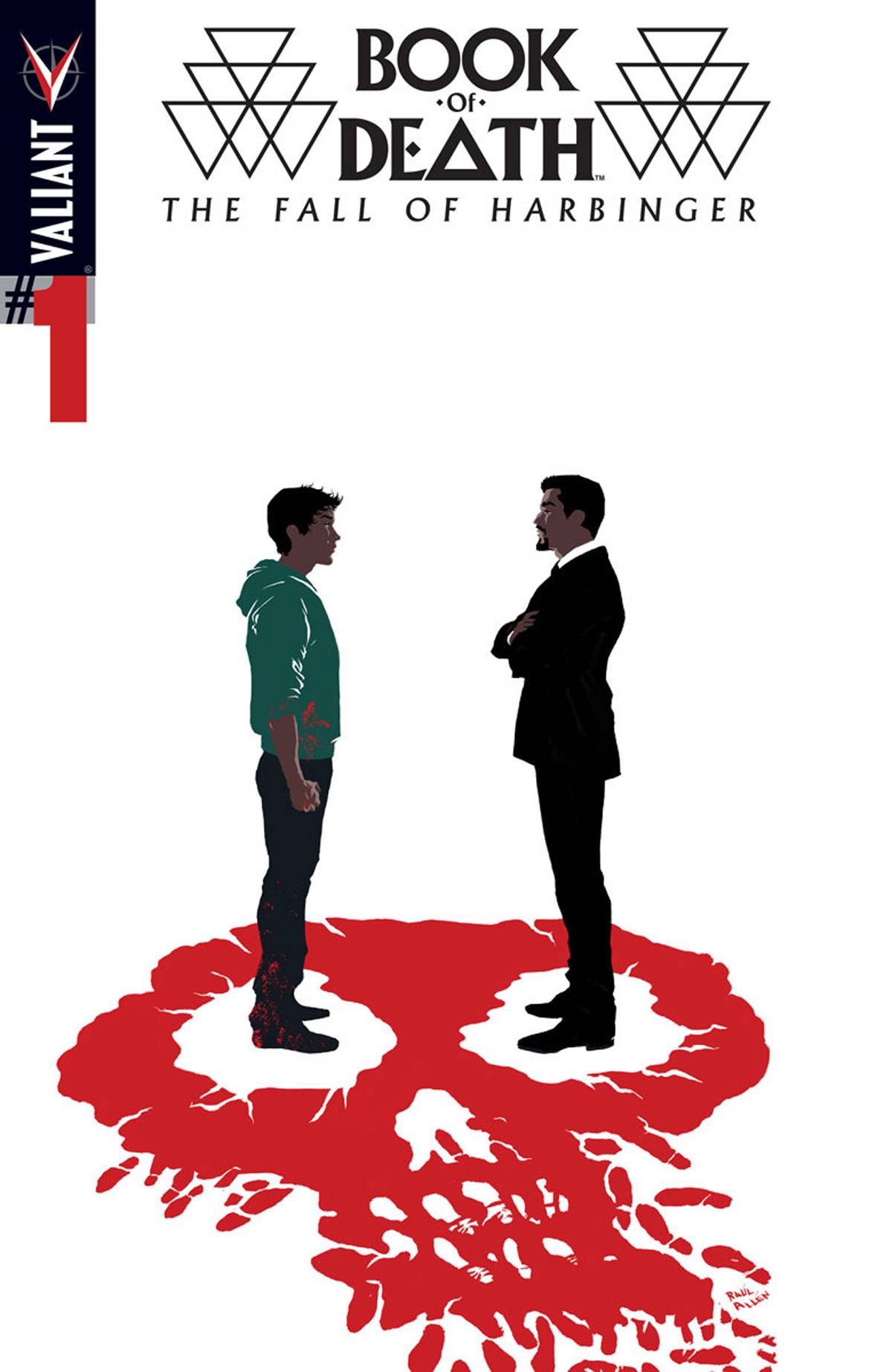 The months turned into years and the years turned into centuries. At the end of the line, Peter Stanchek and Toyo Harada have their final confrontation. Be warned, ye readers, there will be spoilers abound. 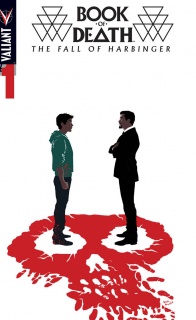 A showdown. An apocalypse. An ending. Many years from today, Peter Stanchek, the Renegades, the Harbinger Foundation, the Bleeding Monk, and Toyo Harada’s Imperium all reach their terminus, as the entire planet becomes the battlefield for the most devastating psionic combat humanity has ever seen. The Great Destroyer, long prophesied and foreseen, comes to Earth at last. Who will survive…and what will be left of them?

New York Times best-selling writer Joshua Dysart (IMPERIUM, HARBINGER) and blockbuster artist Kano (THE DELINQUENTS) journey to the far end of the Geomancer’s BOOK OF DEATH to reveal the final, unavoidable end for two of the Valiant Universe’s most powerful foes.

Let me get something out of the way. The “Book of Death” one-shots that depict the final days of major characters in the Valiant universe have been roughly self-contained. Perhaps it’s because Jeff Lemire and Matt Kindt are do early in their visions of Bloodshot and Ninjak that their “Fall of” issues were very much open things.

“Fall of Harbinger”, while you theoretically could jump into the Harbinger side of Valiant here, I soooo do not recommend it. Don’t get me wrong, the book is self-contained, but keep in mind, writer Joshua Dysart has been crafting Harbinger since 2012, which includes 28 issues of ‘“Harbinger” (1-25, #0, Bleeding Monk #0 & Faith #0), 4 issues of “Harbinger Wars”, 3 issues of “Armor Hunters: Harbinger” and 3 issues of “Harbinger Omegas”. Not to mention the sequel series “Imperium” that’s at eight issues. What I’m saying is that it is all one giant story and jumping into the Harbinger world with this issue is like reading the epilogue of a book first, you wouldn’t get the full emotional context and impact.

And as someone who does have the full context: This is the new Valiant standard.

A question that has been a focal point of Dysart’s “Harbinger” run was “Is Peter Stanchek a good person?” The character was addicted to pills to keep his telepathy under check, at best emotionally crippled and got a nice dose of guilt and survivor’s guilt over Flamingo’s death at the end of the original run. “Omegas” continued this question as Peter withdrew further.

However, the year 2183 where this issue takes place shows us a very different Peter. Older, wiser, sober. A leader in the world, a counselor for dissident psiots, a husband and father. And yet, even at the end as Peter goes to his final confrontation questioning whether or not he’s a good person and a hero. There’s a maturity in that. It reminds me of a scene in a book I recently read, Skin Game by Jim Butcher. In it, a character discusses something about good and bad people. Bad people don’t question whether or not they’re good. Now, “Harbinger” has never been black and white, but it is a good analogy and for what it’s worth, I do believe Peter has changed. His foundation, the good and the bad, have all led him to this moment and it is fulfilling.

Peter is only one half of this coin though, the other half being Toyo Harada. Harada is one of the most compelling characters in the entire Valiant universe. I will say this here, I did not expect the fate he had here, nor did I expect the personality he had. Where we’ve seen him as the well-intentioned, but clearly a bit despotic in “Harbinger” and “Imperium”. To be blunt, I did not expect him to put aside his ego to leave the planet in order to protect it. It just goes to show that this character isn’t one dimensional.

And we do learn the eventual fates of the rest of the Renegades, Kris, Torque and Faith. I’ll admit to have been disappointed, but get why Torque’s fate makes sense for the character. Kris’s end was incredibly appropriate for her as she seemed to be the one most driven by political idealism to stop Harada. But I want to talk about Faith’s end for a bit. With the news of a mini-seriest I thought it appropriate to discuss her death the most. “Harbigner” always was an examination and deconstruction of superhero and super-powered teen tropes, so maybe it was that mentality that I always thought that it would inevitably go horribly wrong for the optimistic and bright heart of the Renegades. However, Dysart gives her the happiest ending after having a life doing what she loved, being a hero. It’s touching and poignant.

Now that we’ve talked about that somber character work, let’s talk about how everything goes Pseudo-Psycho What the Lovcrafty Hellery that was the second half of this issue.

And this is where the art absolutely soars. Kano has always been an artist that I always liked well enough (see the annual he did for DC’s “Swamp Thing” and the Archer & Armstrong/Quantum & Woody crossover “The Delinquents”) but this was the issue where the man went on my “artists to watch” list. This is the best work I’ve seen from the man. An insane amount of detail went into this book.

The book started out well enough when on Earth. Kano was able to depict that utopia that Harada forced on the world quite well and show some of the future structures in power like the Sunlight on Snow Perception Node and Peter’s psiot school. Then after Peter leaves it gets a bit more trippy as he communes with sentient constructs of his Renegade friends one last time. I applaud Kano’s use of soft pinks and blues during this happy, but tinged with sadness, “reunion”.

Then everything goes red!

The final encounter between Peter Stanchek and Toyo Harada is not a simple one. It’s not a battle of fists. It’s not even a battle of political ideology. It’s something deeper than that. At times more otherworldly and completely human at the same time. And it’s confusing and Kano’s art work makes it gloriously confusing. Paneling, line work and colors all collide into a battle of minds. And as the Great Destroyer, long since hinted from all the way back to Harbinger #1, finally comes to Earth, the true meaning comes clear.

As the story says: “This is an ending. This is true. No ending is true.”

This is the end of Harbinger, but it’s just one chapter in the much larger book that is the Valiant universe. It will continue on beyond Peter Stanchek and Toyo Harada, as the epilogue of this issue becomes the prologue for the next story. It never gives you a definitive answer as to what happened in that final battle, but that’s the point.

Now I had some disappointments to this issue, mainly because of my own expectations. Wordless previews I saw of this issue and my own desire to see more representation made me think that Dysart was going to going to reveal Peter as gay, which would’ve happened in the original Valiant universe if time had been kinder to the company. That does not happen here, alas. Also, while this does give closure to the Renegades and Harada, you won’t be seeing any other characters from the Harbinger side of world (afraid to mention Generation Zero here out of fear my editor will come and bash my head into the keyboaajkdgjnaf;jbaj).

Still, those are minor quibbles. At the end, Joshua Dysart and Kano put the metaphorical end page to the saga but show that it’s no ending at all. The world will still keep turning.

Final Verdict: 10.0- Impenetrable to new readers, but an absolute love letter to the characters and themes and fans that have been built since 2012. Take a bow, gents. You earned it.