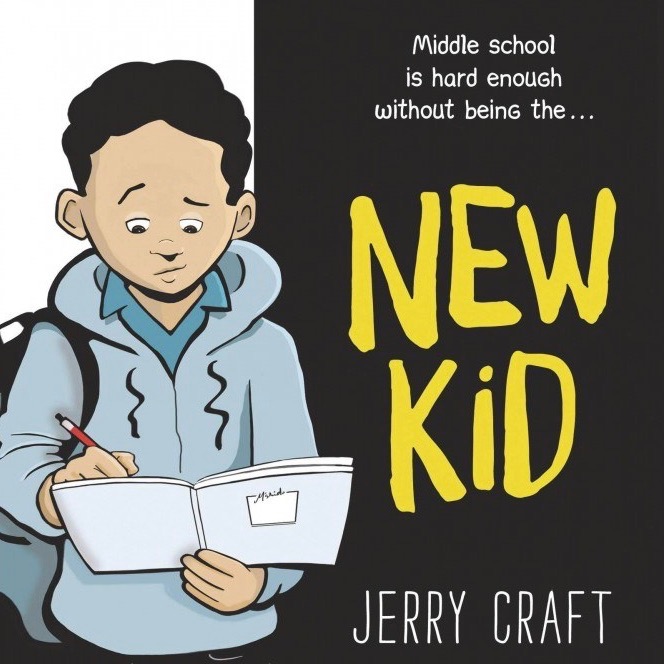 With so much great all-ages content out there and more arriving every week, whether you’re a parent, teacher, librarian or young reader, sifting through it all can be a daunting task. Of course, reading lists are subjective and tend to change over time. That’s why Multiversity’s Bookshelf Basics is designed to give you a place to start, and be an enduring a resource that you can return to as your tastes and interests evolve. In today’s installment we look at “New Kid,” a humorous and heartfelt take on what it’s like to be new and different during the inherently awkward middle school years. 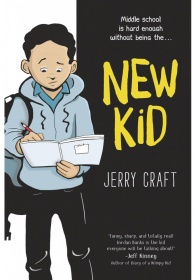 Seventh grader Jordan Banks loves nothing more than drawing cartoons about his life. But instead of sending him to the art school of his dreams, his parents enroll him in a prestigious private school known for its academics, where Jordan is one of the few kids of color in his entire grade. As he makes the daily trip from his Washington Heights apartment to the upscale Riverdale Academy Day School, Jordan soon finds himself torn between two worlds—and not really fitting into either one. Can Jordan learn to navigate his new school culture while keeping his neighborhood friends and staying true to himself?

Author-illustrator Jerry Craft is probably best known for his award winning comic strip “Mama’s Boyz,” distributed by King Features Syndicate from 1995 – 2013. Aside from winning the African American Literary Award Show Open Book Awards for Best Comic Strip in 2004, 2009 and for three consecutive years from 2011 – 2013, the strips were collected and published in four separate, equally lauded volumes. At the same time, Craft also illustrated numerous picture books and graphic novels for publishers such as Harper Collins, Scholastic, Benchmark and Pearson, earning recognition from the Junior Library Guild for his work on “The Zero Degree Zombie Zone” by Patrick Henry Bass. Craft is the co-founder and co-producer of the Schomburg’s Annual Black Comic Book Festival, which has drawn close to 50,000 fans since its inception in 2013.

“New Kid” is what happens when “Diary of a Wimpy Kid” gets woke. Not the protagonist per se, but the book’s overall aesthetic and infectious vibe. Like Jeff Kinney’s iconic character Greg Heffley, creator Jerry Craft’s hero Jordan Banks is a quiet, unassuming, somewhat geeky, non-athletic kid. He also really, really wants to go to art school. Instead, his parents decide to send him to the prestigious Riverdale Academy Day School, where we quickly learn that Jordan is just one of a handful of African American students in a veritable sea of incredibly privileged upper-class white kids.

To say that Jordan feels out of place is a vast understatement. It’s also where the book soars. In a series of concise, tightly written and wonderfully drawn thematic chapters, we watch Jordan try to navigate his unfamiliar surroundings while enduring daily microaggressions and having to get very good at the subtle art of code switching.

In addition to Craft’s colorful, pitch perfect cartooning, each chapter also includes a short black-and-white comic from Jordan’s notebook, in which he’s always sketching and sharing his innermost thoughts. These often self-deprecating, youthful observations – which address the reader directly – not only serve as a clever comic-within-a-comic, but provide a highly personal, real-time commentary on Jordan’s emotionally draining daily life. One of Jordan’s two-page strips, early in the book, captures this dynamic perfectly while also providing a framework for the narrative that follows.

As Jordan rides the bus from his apartment in Washington Heights to his posh private school in the Bronx, he literally and figuratively switches his outward appearance like a social chameleon. In his own neighborhood he tries to look tough, wearing a hoodie and sunglasses. As he travels through Inwood, he loses the hood but still doesn’t smile. In Knightsbridge he takes off his shades and can even draw in his notebook. In Riverdale, however, he doesn’t want to be perceived as someone who might “tag the bus,” so he puts away his notebook and overtly proclaims, “I LOVE quadratic equations, don’t you?” By the time he arrives at his school, he’s already exhausted. One of his classmates observes, “That new kid is kinda cool.” Her companion dryly responds, “Yet so non-threatening!” – exactly the box in which Jordan is forced to fit through no choice of his own.

Kirkus Reviews called “New Kid,” “An engrossing, humorous, and vitally important graphic novel that should be required reading in every middle school in America” and that’s not hyperbole. Even as he wrestles with the incredibly complex, emotionally fraught dynamic of what it means to be a back body in the predominantly white, historically cloistered space of a private day school in one of the wealthiest cities on earth, creator Jerry Craft never preaches, never lectures and never dumbs things down. Nor does he villainize or try to divide things neatly into a stark binary of right and wrong. Instead, inspired by his own experience as a student at The Fieldstone School, Craft deftly presents a text that serves as both window and mirror, trusting the reader to pay attention and perceive what’s really going on while drawing their own inferences and making personal connections, wherever they’re coming from.

It definitely helps that the book is incredibly accessible and consistently laugh-out-loud funny.

Thus, the tertiary characters’ many transgressions – large and small – become concrete teachable moments and stark examples of how good, well-intentioned people can nonetheless do and say some really crappy things, even as we’re laughing along with Jordan and his friends at the baffling absurdity of it all.

One white teacher can’t keep the names of her black students straight. Another automatically assumes that an African American teacher must be the school’s football coach. When “financial aid” is mentioned, the upper class white kids sneak covert glances at their black classmates, assuming they’re “underprivileged” even though one of their dads is the CEO of a Fortune 500 company. From heartbreaking to hilarious and everything in between, the list goes on and on. Even so, the point is not so much to catalogue a list of grievances, but to explore how different characters react and respond to these microaggressions. Naturally, Jordan remains at the center, but Craft’s compelling and likeable cast of well-rounded, fully realized characters – from Jordan’s private school classmates to his grandfather to his neighborhood friends – add wonderful depth and nuance to a story that simply succeeds on every level.

You can find “New Kid” in hard cover and trade paperback wherever books are sold, as well as local comic shops and online retailers. You can also find ebook editions on your favorite ebook platform, including Kindle, Kobo and Google Play.

“New Kid” is a startlingly honest take on what it means to “fit in” when you don’t look like the vast majority of your classmates. It never tries sugar-coat things or talk down to its younger readers, and therein lies its strength.