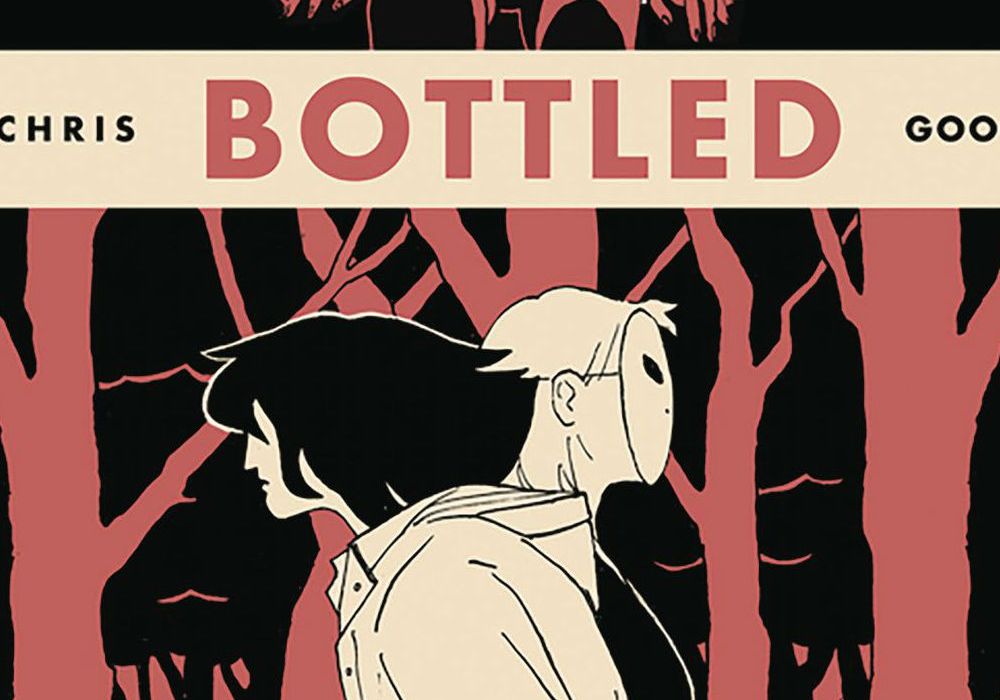 With “Bottled,” Australian cartoonist Chris Gooch makes a somewhat frustrating graphic novel debut. Frustrating in that this story of mundane millennial alienation and jealousy escalating into something unsettling, has all of the parts of something really good, something right up my alley; however, these great parts don’t quite click together. But they almost do. 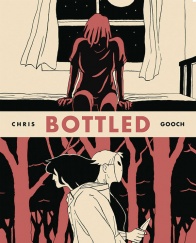 Jane is sick of her dead-end life in the suburbs and desperate for a change. Her old schoolmate Natalie made it out, working in Japan as a fashion model. Now, as Natalie comes back to town on business, Jane sees a way for her friend to do her a favor… whether she likes it or not.

In this book, Gooch builds up characters that are instantly recognisable as real people in a subtle way; however it feels like Gooch is unsure of whether his subtlety is coming across, so it feels like characters are established multiple times. This means it takes a while for the story to really get going, to the point that I think you could probably skip the first chapter without losing anything. There’s a writing adage about how you should come into a story as late as possible. I think chapter two onwards is clear enough in terms of establishing character dynamics and motivations a reader could infer the events of chapter one (which isn’t particularly eventful anyway, the idea being to ground the story in the mundane). I would, however, recommend reading the prologue, which is this short, cute character moment that adequately grounds the story.

The story is one that is instinctually relatable to those of us in our young adulthood. Jane is trapped at home with her mother and her cartoonishly horrible step-father. Not quite able to afford to move out, Jane sees her friend Natalie is a successful jet-setting fashion model based in Japan. There’s this sense Jane feels inadequate in her situation, but not quite able to escape it. Jane’s jealousy of Natalie’s seeming success, fueled by anger over a past betrayal, leads Jane to pull Natalie into an inescapable situation of her own. Natalie’s success isn’t as glamorous as it seems, and she is already in a trap of the fashion industry’s making. Everyone in “Bottled” is fundamentally trapped, at the start and at the end.

In “Bottled,” Gooch traps his characters inside of quite rigid panel structures, lots of straight lines and grids and firm, black borders around each panel. Much like the situations these characters find themselves in, these panels are inescapable. But Gooch’s cage of panels isn’t the same as the cage that the nine-panel grid makes for Scott Free throughout “Mister Miracle.” Here the layout shifts. Again, it’s this thing of uneasy insecurity, the trap changes but you’re still trapped.

That sounds pretty cool and interesting, right? So, why doesn’t this story click with me? I feel like I’ve seen stories very similar to this, and Gooch doesn’t particularly add anything new here. This book definitely had space to subversive things, but it just ends up covering already trodden ground.

Gooch’s art is also something that initially seemed appealing to me. When I flicked through “Bottled” in the comic book store, I was struck by the look of the book. The most obviously sticking thing here is this red that’s used as a highlight throughout a book that is otherwise black and white. This thing of just having one colour for a book is something you see fairly often in comics like this, but Gooch does do interesting things with it. The red he uses isn’t this strong, bold scarlet red, it is a red that’s unsure of how bold it wants to be. Red is a colour of passion and fire and anger and love but the red of “Bottled” isn’t quite sure whether to give into these strong emotions. What further adds to the unease of this red is that it’s not consistent — sometimes it’s a half-tone, sometimes it’s a gradient –establishing a tone of disquiet that runs through the whole book. The problem here is maintaining it in a way that doesn’t alienate a reader, and, again, I don’t think Gooch quite achieves that, leaving me feeling a bit cold.

Another thing that is on the verge of being really good in “Bottled” is the way that Gooch draws his characters. They’re slender and they’re awkward and they have spider-leg fingers. They’re very human but they also have an underlying inhumanity. Each character looks unique but in small ways, they all have expressions and mannerisms that, while subtle, are character building. Every now and then, however, there’s a panel or a page or two where it feels Gooch’s focus is on something else and the characters feel less visually strong on the page.

“Bottled” touches on interesting ideas but doesn’t really add anything new to them. “Bottled” is a book that gives the impression of brevity but not the execution. “Bottled” has a lot good but not any great. I think “Bottled” shows Chris Gooch as a cartoonist who has the potential to do something great, even if “Bottled” isn’t that.