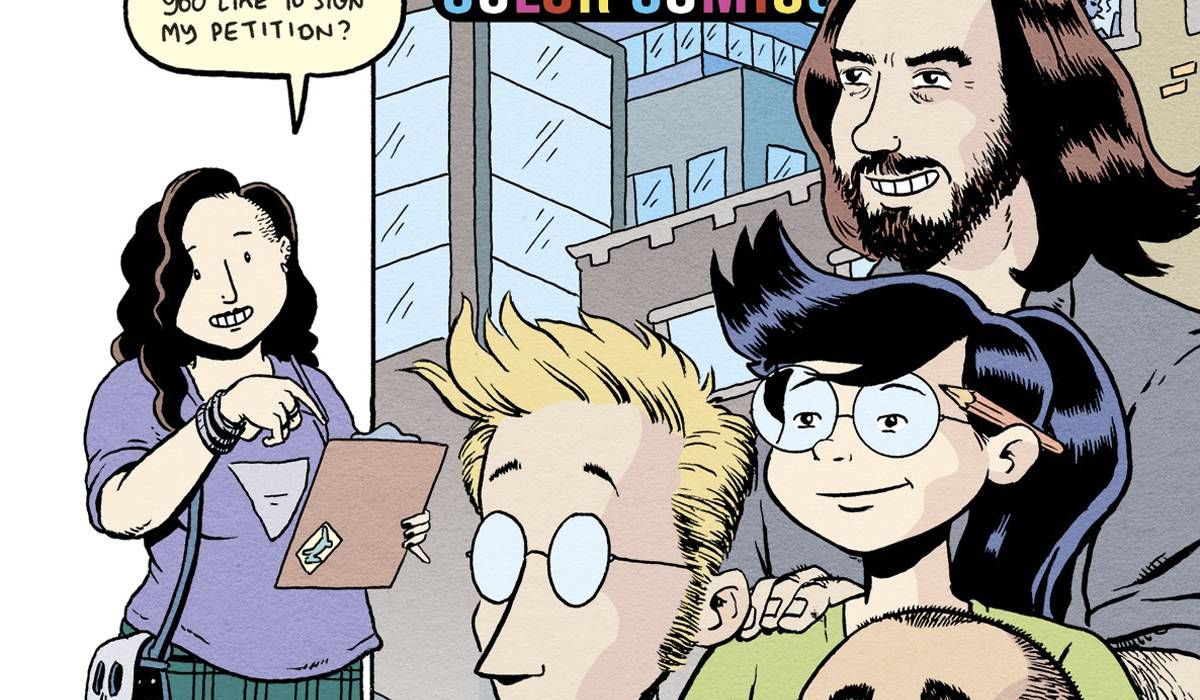 “Box Office Poison” was a major player in the ’90s indie comics scene, though it probably received most of its attention and acclaim when Top Shelf published the album in 2001. Alex Robinson created 21 issues in total, centering around the day-to-day lives of a bunch of New York new adults. Now IDW Publishers (who currently owns Top Shelf, though they didn’t when the album was first released) is bringing “Box Office Poison” back to the spinner racks, with a brand new edition in full color in “Box Office Poison: Color Comics” #1. Of course, the question that comes up when something like this is created is whether or not it’s necessary and whether or not it brings in a whole set of new readers. 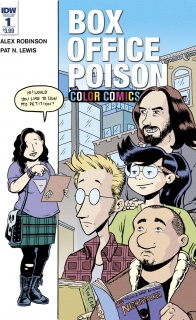 • Winner of the Eisner Award for Talent Deserving Wider Recognition, the International Comics Festival Award for Best Debut Graphic Novel (Angouleme, France), and voted by Wizard Magazine as the best indy graphic novel of all time.

• “A salute to comics, an exploration of the human condition, and a solid, absorbing, and riotously snide tale about at least half of the things that make life important.” – Tasha Robinson, The AV Club

• Each issue will be presented in color for the very first time!

I’ll be honest: this is the first time I’ve read “Box Office Poison”. It’s been sitting on my I’ll get to it soon pile for a long time, so I guess, in that respect, I’m part of the target audience for “Box Office Poison: Color Comics” #1. At the same time, Alex Robinson’s story about entering adulthood, dealing with heartbreak, and seeing a new world is so universal and understandable this edition is bound to resonate with a whole new generation of kids. I mean, it reeks of the ’90s, but some emotions transverse time.

It would be easy to say “Box Office Poison: Color Comics” #1 repeats a lot of the same beats as other new adult stories like “Octopus Pie”. These stories that focus on people moving to a new apartment in New York City, trying to unpack and sort through a bunch of their emotional hangups, figuring out what compromises they’re willing to make for a decent standard of living, while also helping their friends with their own set of problems. But that sort of undermines its influence and ignores Robinson’s skills as a cartoonist. Even in this first issue, he juggles a lot, introducing multiple characters and giving them some agency; jumping between a handful of timelines; and establishing his version of New York City. He keeps his panels open, never overloading the page with them. His characters have slightly abstracted designs, but for the most part he keeps their expressions, body language, and movements restrained and realistic. When he does break away from this, like when Sherman and Sally have a massive argument, his caricatures’ impact is far more effective.

For this edition, Robinson also provides a running commentary. There’s some interesting tidbits in the back pages, but I’m sure a lot of the information is more illuminating for long-time fans of “Box Office Poison.”

Like I mentioned, the question looming over this book is whether or not a color version is even necessary, if it adds to the material or detracts from Robinson’s original linework. Honestly, the color doesn’t really do much of anything.

Pat N. Lewis doesn’t go too crazy with the palette. He sticks to muted tones. His work is most notable in helping differentiate the flashback scenes (which have this sepia tint to them) from the modern day segments. He keeps the values flat and lets Robinson’s inkwork carry on defining the lighting and depth. (And, like, Robinson’s linework is particularly adept? You see, especially in the last pages of this issue, how well he goes at capturing shadows and mood with some well-placed hatching.) The most noticeable choice he makes is having one color pop out in the scene. This helps give shape to the background or stresses some importance on various characters.

However, none of this adds much to the image. At least not yet. Think about Steve Hamaker’s work on “RASL” or Nathan Fairbairn on the “Scott Pilgrim” series: both colorists added a lot more mood and passion to their respective narratives. They changed the atmosphere and energy of the books, made them entirely new reading experiences, and I’m not sure if I’m seeing that same thing here. At most, Lewis’s colors help you easily process who’s in a scene, but they don’t add to the world. Nor do they hinder it. Lewis understands the mood and tone of the story, but when you compare these pages with the original black-and-white, there’s no difference.

Of course, this is very well what a modern day, slice-of-life indie comic would probably look like. Some readers may be more willing to try out a book like “Box Office Poison: Color Comics” #1 because it’s in color and if that’s what it takes for them to find this and potentially connect with it, then all the better! But it’s conservative approach and nearly-invisible usage doesn’t necessarily give this new edition an advantage.

Final Verdict: 7.0 – While Robinson’s cartooning is adept, the new color palette doesn’t yet add much to the material.