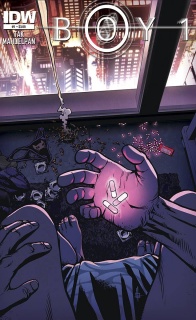 In the fast approaching future, when the drug-addled heir of a genetic engineering company begins to investigate his company’s murky past, he discovers that he is the catalyst in a terrifying global event that will transform him and forever alter the course of human history.

Good Science Fiction is almost always spawned from the same question: What if? It’s the key to a great Sci-Fi story, the immediacy with which it can grab its reader and tickle that part of their imagination that wonders aloud at how the world would change if aliens invaded, or if a parallel universe was discovered, or if we figured out faster than light travel, or a host of other possibilities. For Tak and Nahuelpan, the million dollar question is even closer to home, blending cutting edge achievable technology with a fantastical twist. How would the world change if scientists well and truly cracked the code for the human genome?

That is pretty much Tak’s opening premise. The world he offers is, on the surface, all-but indistinguishable from our own, and his protagonist, Jadas Riezner, is exactly the kind of handsome young wunderkind that the media loves to plug as a real-life Tony Stark. Working for the multinational company his father created before he disappeared, Jadas has managed to perfect a form of genome alteration that allows him to rapidly improve the mental and physical faculties of a pair of lab chimps. But it’s not enough, with pressure from the board of directors and leaps in similar technology from competitors, Jadas is forced to move forward to trials with human applications. Digging into the company’s history with human manipulation leads him down a path that he didn’t even realise existed, and the young super-scientist soon finds the tables turning, leaving him the subject of some dark and mysterious experimentation.

It might sound like a lot of information, but Tak’s storytelling style is strong enough that this first issue manages to both set up a brave new world and deliver  the first quarter of a compelling personal narrative. After some semi-omniscient narration exploring the links between nature and nurture in human behaviour, he dives into the story proper with a cagey but charismatic leading man pushed into a situation that tests even his impressive skill-set. “Boy-1” is clearly a more low-key affair than the perennially popular caped crusaders and tights-wearing titans that people usually associate with comic books but, while this first issue is light on big action set pieces, “Boy-1″‘s strengths lie in the slick, solid tone it sets up and the strong dialogue throughout that carries the narrative forward.

Tak’s confident back and forths between his are engaging and believable, loaded with pop-culture references and characterisation that both builds tension and, at times, offers unexpected humour. Some of Tak’s secondary characterisations feel a little one-dimensional at the moment, particularly Jadas’ damaged but caring love interest Sylvia, but it’s a forgiveable  fumble in a first issue still painting still setting the scene with broad brush strokes. A series like this hinges on its lead character, and Jadas offers a fragile, flawed, but ultimately formidable protagonist who seems more than qualified to carry the story forward.

Nahuelpan’s art is rich and informative, allowing Tak to do focus on character and narrative while the illustrations construct the wider world around him. Nahuelpan has built a viscerally realistic near future cityscape that balances the sleekness of multimillion dollar high-rises with brilliantly realised billboards and signs. Like a William Gibson novel, Nahuelpan’s city seems to exist in a perpetual state of neon soaked night. Through the windows of both Jadas’ office and his apartment (spaces that seem purposefully similar and devoid of character) Nahuelpan’s city looms dark and ominous, with a focus on heavy black inkwork that blurs the world outside the skyscrapers almost into unreality.

This speedy but strong execution of the world at large allows “Boy-1” #1 to focus more on its characters. Tak’s conversational approach to the issue gives Nahuelpan a plethora of faces to work with, and his command of subtle, televisual expressions adds an air of intimacy and urgency to scenes that could have felt flat and repetitive in other hands. One piece of particularly impressive work comes during a loaded conversation between Jadas and his superior Dr. Kiln. Nahuelpan’s command of faces allows Kiln to oscillate between paternal and controlling within two close panels, adding a real feeling of gravitas to what could have read as a pretty innocuous exchange otherwise.

All in all, “Boy-1” builds an interesting and engaging world for its story to play out in. It’s great to see a new Sci-Fi property with a story that draws the readers attention to issues that may not be completely confined to the realms of fiction for much longer. While the ambiguity of the subject matter should mean that this comic gets people thinking about their stance on genetic manipulation and its applications in the real world.

While larger studios excel at cinematic crossovers and high-stakes melodrama, it’s nice to see smaller, creator-owned properties who’s focus is on characterisation and smaller, subtle stories. With the huge success of similar TV property Mr Robot (a mystery hacking extravaganza with a similarly socially detached but talented protagonist) it’s no surprise that there are already rumours about “Boy-1” being adapted for the small screen.

Final Verdict: 6.4 – A fun, focussed debut with a strong idea of where it’s heading. Definitely one to watch.