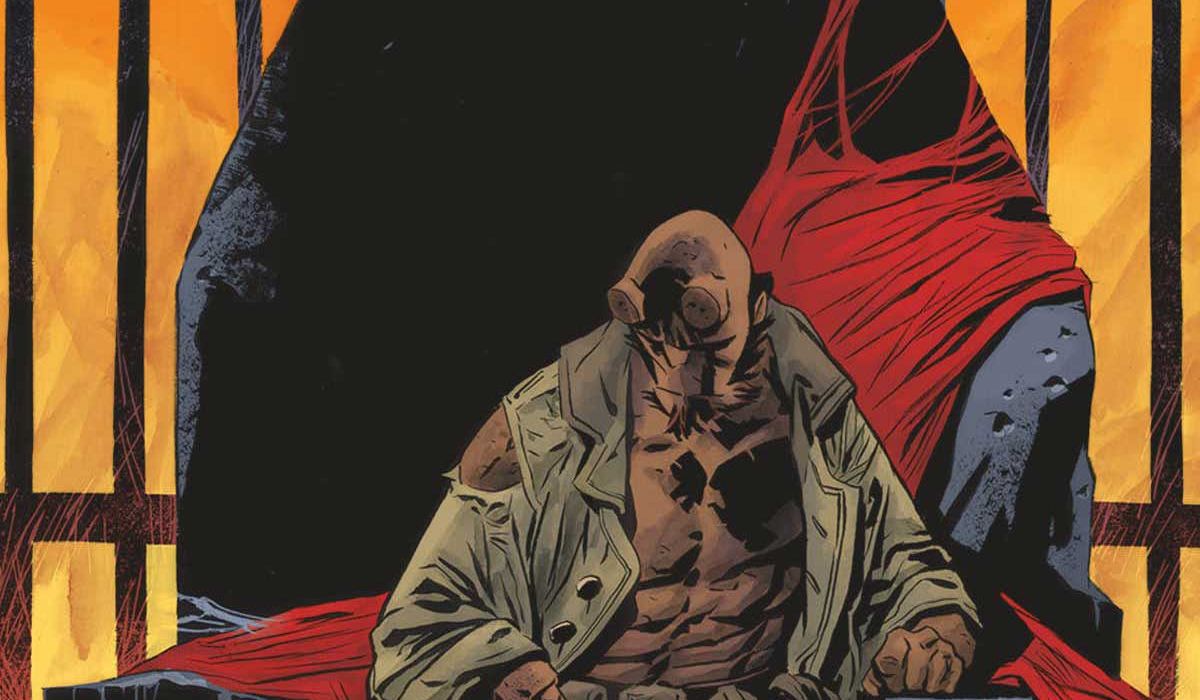 ‘Pandemonium’ wraps up with so many things happening. This is gonna be a long review, folks. 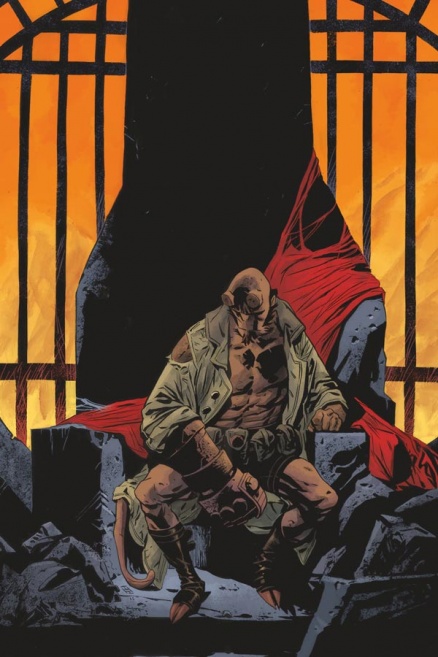 The B.P.R.D. tries to regain traction after a devastating blow, while Varvara plans to attack the agency from the inside.

Before I get to the interiors, I wanted to take a moment to talk about Max Fiumara’s covers on the ‘Pandemonium’ arc. As one half of the artistic team behind “Abe Sapien: Dark and Terrible,” Max Fiumara’s gained considerable expertise in the Hellboy Universe and it shows in these covers. This last one’s easily my favorite though. For years readers have been teased with the prospect that someday Hellboy will sit on Pandemonium’s throne, and Fiumara brings the weight of all those years, of Hellboy struggling against it, to this cover.

Just having Hellboy in the throne alone would have been enough to make me sit up and take notice, but Hellboy’s weariness—his defeat—takes it to a whole other level. This isn’t just a striking visual, it’s an emotive cover. Hellboy’s personality dominates the piece. I love that with the epic events unfolding inside this issue, the cover focuses on character.

Speaking of those interiors, this issue crams a lot inside it. In our last review, Chris was almost feeling a bit of whiplash with how quickly things were moving, and while that didn’t bother me in #9, I am starting to feel it in this issue. It’s a lot to take in, and some moments feel crammed.

Given this is the final issue of the arc, there are some big revelations ahead and I’m not going to attempt to talk around them. Here there be spoilers. Ye have been warned. 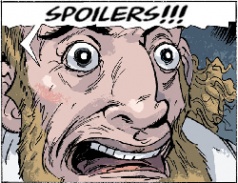 So, picking up from the last issue, which had Devon dying. This issue he’s used as a meat puppet by one of Varvara’s demons as a way to set Hellboy and company on the wrong path. It’s sad to see his fear and anger exploited so that he can be used like a demon, and honestly, it didn’t really work for me. As much of an unmitigated ass as Devon can be, he’s not a coward. Especially with all the friction between him and the other B.P.R.D. agents, Devon’s the obvious choice from a story point of view—unlikeable guy does unlikeable thing, but it doesn’t carry any more weight than that. Honestly, I wish they’d left him dead and used a very much alive Carla Giarocco instead. Don’t get me wrong, I love Carla, but using Carla’s love for her son and fear for his future as a way to corrupt her would have added much more weight and tragedy to this confrontation.

This especially felt like a waste because it appears Carla was killed rather unceremoniously anyway. She’s injured in Demon-Devon’s attack, then later seen slumped to the ground, and then later completely prone, seemingly dead, but this last moment happens in the background. With so much going on, her death (if she is indeed dead) is a rather muted affair. After getting to know this character since the beginning of “Hell on Earth,” I’d hate to see her go out like this, barely noticed.

Overall, this issue feels a bit choppy. Certainly the way Carla was handled felt that way, but there were other moments too, like a brief moment when we cut away from the action in New York to Maggie in South Carolina. It’s so disconnected from everything else in this issue or even this arc, like a fragment that could’ve been pushed into the next issue where it would (I hope) be more relevant.

Back when Mike Romeo and I reviewed “Abe Sapien” together, we spoke about how Scott Allie has a habit of writing for the trade. There are certain moments that, when you read the series month to month, don’t play very smoothly. It shows up in conversations where a character you haven’t seen for a few issues starts talking about something that’s been on their mind, but without first framing the conversation so the reader can go, “Oh, this character’s not on the same wavelength as everyone else in this scene. They’re still thinking about those zombies from a few issues back.”

It’s not a major thing, but it damages the immediacy in the dialogue. However, when you read the same story in the trade, this awkwardness vanishes. And I think that’s still the case here in “B.P.R.D.: The Devil You Know,” although I’d argue at times Allie’s not even writing for the trade anymore. He’s writing for the omnibus.

“The Devil You Know,” more than any other Hellboy Universe story before it, really is one big story. Even if you go back and compare it to the other big stories of the past, like the “Darkness Calls,” “Wild Hunt,” and “The Storm and the Fury” trilogy or “The Warning,” “The Black Goddess,” and “King of Fear” trilogy, those stories still had natural breaks in between each arc, with natural lulls where the story winds up again. “The Devil You Know” doesn’t do this. It’s all forward momentum, which is the sort of thing that works great for a graphic novel, but doesn’t sit as comfortably with serialization.

I spoke about Dave Stewart’s colors progression in my last review, but there’s so much more going on than I covered. “The Devil You Know” is a continuation of “B.P.R.D.: Hell on Earth,” and “Abe Sapien: Dark and Terrible,” and it quotes the color language from those titles, but it’s also a continuation of “Hellboy in Hell.” Throughout the “Hellboy” series we saw glimpses of Pandemonium, the capital of Hell, bathed in rich reds. However, when Hellboy finally arrived in Pandemonium in “Hellboy in Hell,” while the rivers of blood were still marvelously red, Pandemonium itself was more muted than we were used to seeing. Abandoned by the denizens of Hell, the power of Pandemonium was waning. Over the course of the series, Pandemonium became more and more dull, until it was finally consumed in flames.

Whereas the the reds of New York, of New Pandemonium, are more vibrant than anything we ever saw in Old Pandemonium. Stewart constant builds on the language of his past stories, giving the Hellboy Universe greater cohesiveness than a story of this scale has ever had before. We’re truly watching a master at work here.

Laurence Campbell’s sense of scale pairs fantastically with Stewart in this regard. Ever since ‘Wasteland,’ it’s been clear that he excels at bringing a ruined cityscape to life in a way that feels real, but when he adds the trappings of Hell to that, it kicks his art to a whole other level. He revels in the surrealness of the statues of Hell in New York. 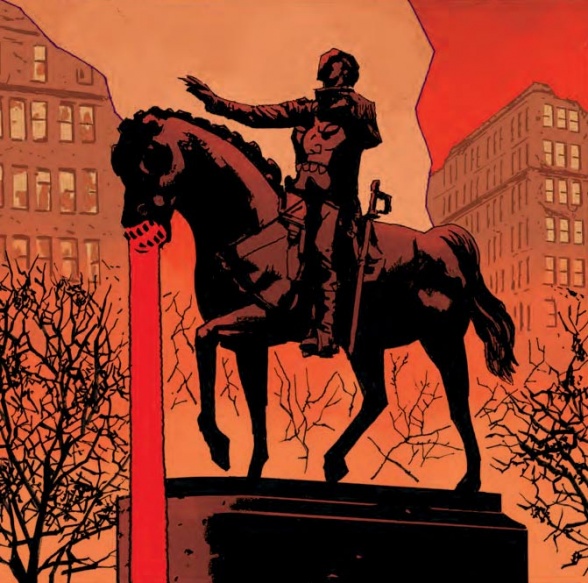 OK, let’s talk about that final scene. I love that Abe leapt in to save Fenix from Balam. In the grand scheme of everything that’s going on here, it’s a small thing, but it’s an important thing too.

Ash gets her moment in the sun. She gets to totally kick ass in this sequence, even if it may have played directly into Varvara’s plans. At the very least, she destroyed that knife with Satan’s blood on it. Ash died, but she died fighting like we’ve never seen her fight before. I’m only sorry we didn’t get more stories with her.

As for Rasputin’s return, it’s played as this big moment, but I didn’t really feel it. Rasputin was a character that I would’ve been happy to never see again. When the last fragment of his soul fell into Hell in ‘Darkness Calls,’ he had become so pitiful. His ego had been ground down in such a satisfying way, his very soul used up by the very beings he’d thought would elevate him to godhood.

Since I first read this ending, I’ve had time to sit on it and mull it over. Listening to the Hellboy Book Club’s podcast on ‘Conqueror Worm’ certainly made me feel a little better about it, especially since that story had so many iconic images of what ending lay ahead, and so often these images feature a silhouetted character that could be Rasputin. But still, at best I feel ambivalent about Rasputin’s return. At this late stage of the story, he’s just not that interesting to me.

On the other hand, I suddenly have a lot more questions about Varvara. For a long time I’d always assumed she was simply Yomyael in human form. It’s only in “The Devil You Know” that it became clear that Yomyael and Varvara were two distinct beings, one a demon and the other a human possessed. That said, I still assumed Varvara was just an innocent human, not someone important, and certainly not someone evil. This was a turn I enjoyed, even if the ultimate revelation that she was Rasputin’s daughter didn’t interest me very much.

Perhaps this is why we’ve seen the surge of miniseries exploring Rasputin lately, like “Rasputin: The Voice of the Dragon” and the upcoming “Crimson Lotus,” which clearly has Rasputin on the cover for issue #1. Perhaps we may even see a Varvara miniseries in the future, as there’s clearly a story there and I’d hate to see it crammed into the already stuffed “Devil You Know” cycle.

Despite its shortcomings, this is still an excellent issue. Yeah, Devon’s final moment in #9 is weakened by his turn here, and Carla’s seemingly discarded with little notice. But Ash’s death ups the stakes massively. We still never got to that moment on the cover though. I hope that’s still ahead, because it’s a story that’s screaming to be told.

Final verdict: 7 – We’re seeing a bit of buckling under the strain from so many different characters and plotlines, but “The Devil You Know” #10 delivers on the essentials, especially where Campbell and Stewart’s art is concerned.