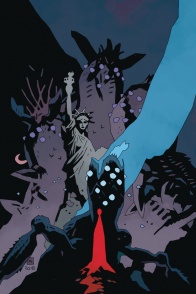 The B.P.R.D. desperately grasps for a plan to save humanity from a deep-seated danger, while Hellboy is visited by an old acquaintance with new information.

Warning: As usual, this review is spoiler-heavy.

Damn, Laurence Campbell was great on this issue. Sometimes Campbell gets a panel composition so perfect, it feels like it’s been imprinted on my brain. The thing is, we’ve had a bunch of issues with some epic stuff going on, and he’s been knocking it out of the park. Here he has that stuff, and it’s amazing, but the showcase moment is a conversation with Sir Edward. On paper it sounds like a the sort of quiet moment that’d get drowned out be the epic material around it, but instead it’s the clear centrepiece of the issue. Campbell handled this sequence so beautifully, referencing Mignola’s style to evoke the world of Hell, while also doing stuff that’s uniquely Campbell.

The transition alone, from the B.P.R.D. control room full of monitors to a brickwork wall behind Hellboy, was so elegantly handled. As though Hellboy had stepped into a dream, the environment shifts from one to the other.

The sequence was a visual feast. And as usual, Dave Stewart’s colors and Clem Robins’s letters are pitch perfect. Actually, Robins takes a step back with sound effects in this sequence, which supports the dreamlike quality of Hellboy and Ed’s conversation. When the conversation ends, there’s an abrupt transition back to the B.P.R.D. monitor room with all the TV screens filled with static, and only then does Robins reintroduce sound effects, effectively severing the dreamlike quality and snapping us back to the real world. I didn’t even notice it on the first read through, but I felt the effect of it.

And, of course, there’s other the stuff Robins and Stewart do in tandem, like Robins using the same color for Rasputin’s word balloons as Stewart uses for the flame over the head of Nunn-Jahad. Without words, this communicates that the power of the seven is in Rasputin (a technique they also used way back in “Hellboy: The Storm and the Fury” for Nimue).

This sort of visual communication is really important too, because in twenty-two pages this issue has a hell of a lot of material to cover and information to impart, and the beauty of doing it this way is the dialogue only has to go so far, and the images take the reader the rest of the way. This isn’t a fault of the dialogue either—this is by design. It leaves space for ambiguity. Instead of getting bogged down in the mechanics of how Rasputin came back, we’re given just enough to piece it all together, with color used to help us intuit answers. (Also, I don’t know whose idea it was to use the Indalo pictograph, but it was a nice touch, especially since humanity is going underground to escape a metaphorical storm.)

With the Hellboy Universe, Mike Mignola and his fellow creators have always focused on building a visual language in these stories—it’s evident in every page of this issue. There’s this weight of decades of storytelling at work here. When Stewart uses a particular shade of green, he’s not just using green because it looks cool or it’s sickly or whatever else you could pull from a book about color theory; he’s using it because that shade of green has been used in association with particular character archetypes, or certain thematic elements, or specific mythical beings (like the Ogdru Jahad of Hecate) or powers (like Vril or Shakti). And it’s remained so consistent because Stewart’s been on these books since the mid ’90s, and Robins since 2002, and because Campbell so diligently works with the language established by his predecessors—I mean, he literally changes his style of panel composition from Guy Davis “B.P.R.D.” to Mike Mignola “Hellboy in Hell” in this issue and it’s seamless.

In terms of plot, this pays off on a lot of long-term story elements. At one point, Maggie even says, “Annui sancti Hyperberum. Sancti ab-jura,” a line first spoken all the way back in 1996’s “Hellboy: Wake the Devil.” And the team is even headed back to Cavendish Hall from 1994’s ‘Seed of Destruction’. (I don’t know why I didn’t see that coming—Cavendish Hall is in upper New York state after all and they’ve been hinting that the end would be set in New York for years. Maybe it’s just because I keep forgetting New York is not just a city, it’s also the name of a state.)

I was really happy to see the focus back on the characters too. Given how much this issue has to cover, they could’ve easily been drowned in plot, but instead they drive the reveals—this is especially true in Hellboy’s scenes.

And we got the vampires back. I was beginning to think their appearance in issues #1 and #2 were all we were going to get, but this was a nice touch (although a horrifying end for poor Bruno). No more of the Osiris Club though…

This issue covered a lot of material. It could’ve very easily felt like either a mad rush or a lecture, but instead it had sequences focused on character and atmosphere. The events are still large scale, but there’s an intimacy in the telling of it that’s very satisfying.

Final verdict: 8.5 – There’s some great stuff here for long-term fans, and Laurence Campbell has a way of elevating even a simple expository conversation so that it feels grand and mythic.