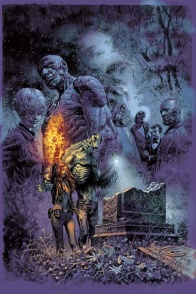 A return to the demolished headquarters, the site of Kate’s death, reunites old team members as Abe pursues a demon and Varvara reveals her terrifying plans.

As is usual for one of our reviews of a final issue of an arc, this review contains spoilers. However, I want to stress THIS REVIEW CONTAINS MAJOR SPOILERS. IF YOU HAVE NOT READ THE ISSUE, VENTURE NO FURTHER!

I’ve gotta say, I loved this one. Everything came together in a big way. The stuff with Tian and Liz that bothered me in issue #1 ended up leading to a great scene between Carla and Liz. Especially for Liz, this arc is an excellent bit of character development. Liz saw this future (or a version much like it) way back in “B.P.R.D.: King of Fear,” and for a while it destroyed her. And it still hangs over her. I also liked that line, ‘I’ll see it through to the end,’ knowing that Liz already knows Carla is going to die.

There’s a lot of talk about death in this issue. The opening two pages with Bruno (remember him?) don’t have much to do with the plot, but thematically they’re invaluable. I loved this sequence talking about the romance of graveyards. It was beautifully handled by everyone involved. And, you know, I totally love Kate, so this moment means a lot to me.

I know we tend to say it a lot on this site, but Laurence Campbell is fantastic. In this issue, it’s even more evident than usual. There are so many character moments that lean heavily on the art and he absolutely nails them. And he references art from Guy Davis, Sebastián Fiumara, and Mike Mignola—not copying their style, but introducing elements that suggest it. It’s a fine line to walk, but he absolutely pulls it off. Some of the best stuff he does is so understated. I’m continually blown away by his ability to use panel composition to let an emotional beat play out instead of relying on a character’s facial expression. For the most part he evokes emotion rather than portrays it. 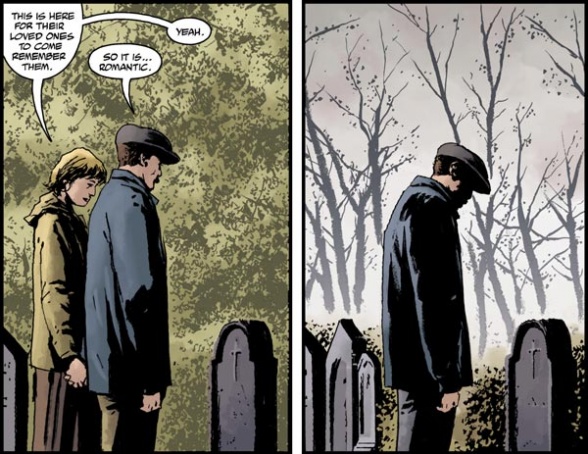 The sequence with hordes of people cheering a demon and a bunch of Nazis made my skin crawl, especially those wide panels that shows just how big that crowd is. That one panel with people reaching out to touch Nazis was super fucked up… and I’m saying this about a scene that ends with everyone’s souls getting sucked out by a demon. That one panel was the creepiest moment in this whole arc.

And yet, as dark as this arc gets, darkness is not what defines it.

I loved the scene with Abe revisiting Maggie. “The Garden (II)” was one of my favorite arcs from the “Abe Sapien: Dark and Terrible” cycle, so it’s no surprise that I liked the callback, but I also appreciated Abe going straight to the source and asking questions directly instead of pondering all the things on his mind without really doing anything to seek out answers. This is a new Abe indeed! And he walked away from this encounter with a smile. It’s nice to see Abe coming back to life again. Oh, and the exchange between Maggie and Howards was awesome.

I have to call out a few little things that I loved. I remember complaining about Abe being vague as hell in the last issue, so it was great to have Liz say, ‘Abe has this idea about a vessel… I’m not sure the significance—I don’t think he knows.’ I burst out laughing at that, and it was a reminder that these books tend to read better as trades.

Professor O’Donnell knocking his coffee flying and then Liz mopping it up with one of his papers was another great moment. The brief callback to “Frankenstein Underground” was another nice touch.

All these small touches peppered throughout make for such a pleasure to read, making this world and its characters feel real. This would have been a strong issue even without that final page. The character work in this one was excellent.

These lighter moments in between the darker scenes really elevate this issue. It’s nice to feel the characters starting to connect with each other again instead of isolating themselves. This is why, as grim as that scene with Carla and Liz was, I loved that scene. It’s why I loved an entire issue of Liz and Abe being back together again. It was incredibly cathartic after being apart for over eighty issues.

For a series that has been so very grim for so very long, this was an issue with a lot of joy in it. The idea of digging up Roger’s grave filled me with so much dread. I knew something big was coming at the end of this issue and I was expecting some horrible bombshell. I was braced for something bad.

Seeing Liz and Abe together made me smile, but seeing Hellboy again may have broken my face. What a way to end the arc! (Man, I remember waaaaaaaay back in the “B.P.R.D.: King of Fear” days someone posted a theory about Hellboy returning in Roger’s body on the old CBR Hellboy forum. I don’t remember who it was now, but I tip my hat to you.)

I am so ready for the next arc. Mike Mignola, Scott Allie, Laurence Campbell, Dave Stewart, Clem Robins, and Katii O’Brien, this was awesome. Bloody hell, what a way to wrap up the year!

Final verdict: 9.5 – I know we’ve already done our end-of-year wrap ups, but can I pick the last panel of this issue as my favorite moment of the comics year?

NOTE: Readers, please restrict any mention of the events on the last page to the comment section of this review. The trade paperback comes out in April and we’d like to avoiding spoiling the reveal for anyone.