Sebastián Fiumara wraps up his run on “B.P.R.D.: The Devil You Know” in this busy, yet subdued issue. 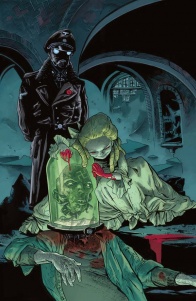 One agent’s confession brings the B.P.R.D. closer to finding the cult leader enslaving followers from across the country, and dissent within Varvara’s ranks leaves cracks in her plans for a new Pandemonium.

Mark Tweedale: I think my own expectations sabotaged me a bit this time. I was so ready for the Abe–Fenix confrontation and, while that story does still have a little forward momentum, it was barely there. I just wanted it too much, I guess.

What should be obvious to anyone that noticed, y’know, the cover is that the Varvara plotline moves forward. Devon may not’ve been happy with Ashley shooting a possessed guy, but she shook loose some leads worth investigating. The Bureau’s been in the dark for so long, it’s nice to see them putting the pieces together at last.

Christopher Lewis: Yeah, I saw this issue as a return to reality. Since Hellboy’s return the team has been in shock. The momentum has slowed down and there has been a reprieve from the tension. Now everything is ramping up again and the tension has returned due to the Varara storyline.

And while I am happy to see the overall story progress—the down time we’ve had has allowed for some special character moments. I was hoping for more these moments, but in this issue they seem to have taken a backseat for the main narrative. I want to make it clear that this is not a negative, but I just really wanted more.

Mark: This issue is definitely more plot focused than character focused. It’s one of those “put the pieces in the right places for the next stage” issues. Clearly, New York is the place to be and so, yet again, I find myself worried about Fenix’s vision from “B.P.R.D.: Hell on Earth—The Return of the Master.” I don’t think Abe’ll enjoy New York very much. Do I think this scene is literally going to happen? No. But even if Abe isn’t literally crucified, he is the first of the third and final race of humanity, and if Varvara aims to challenge that, then New York isn’t going to be fun for him. 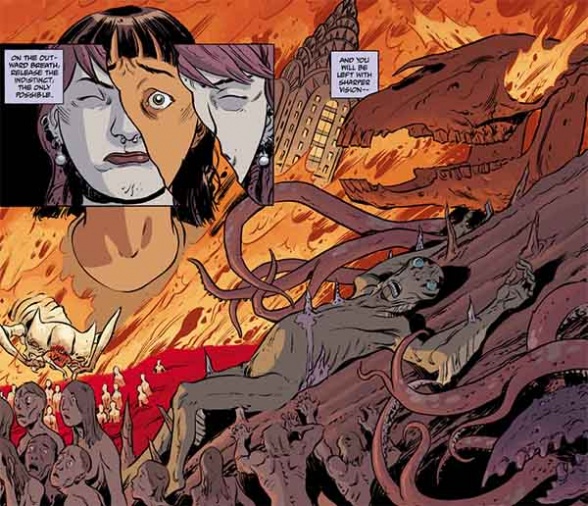 From “B.P.R.D.: Hell on Earth—The Return of the Master” (art by Tyler Crook)

Chris: I actually stopped giving any credence to Fenix’s vision from ‘Return of the Master’ after the “B.P.R.D.: Hell on Earth” and “Abe Sapien” series ended, but maybe you’re right and it has relevance now. The imagery there does fit better with our current storyline.

Mark: Speaking of Fenix’s visions, it’s interesting in this issue to see Liz push for Fenix’s involvement. However she feels about Fenix shooting Abe, Liz still has faith in her abilities. The relationship between Liz and Fenix may be thorny right now, but it’s certainly not in danger of falling apart.

Chris: What surprised me most was in Fenix’s moment of doubt, Liz stepped up and gave her encouragement. Encouragement is a more personal type of communication than just requesting help from somebody you don’t like, so yeah this seems like the beginning of their reconciliation. They are still far from being okay, but this interaction definitely gave me hope for their future.

Mark: Let’s take a moment to talk about Varvara for a moment. Or should I say (spoiler warning for here onward) Yomyael? It’s strange to think she was introduced all the way back in 2008 and a decade later we’re learning her true name. I’ve always found her a curious character; she’s a demon with genuine affection for humans and a real curiosity for living on Earth. She chose to stay on Earth because she saw great poetry in the world and came to dream as humanity dreams.

I can’t help but think of this when Bifrons says he has a stronger claim to making a new Pandemonium on Earth. Varvara’s bond to the Earth is stronger than any demon’s. It seems only right that the one who would cast aside her place in Hell in favor of a place on Earth would be the one to make a new Pandemonium here.

Chris: I’m with you, and think it is inherent for demons to challenge, fight, and betray each other. Bifrons using Varvara’s true name felt like an intimidation tactic, as knowing the name gives Bifrons power over her. What I did find fascinating was one of things Leonid said about Varvara on the B.P.R.D. ship. “A child… possessed by one of the three demons who aided Tsar Peter…” I always thought that Varvara had taken a human facade, so was surprised to find she had possessed a young girl.

Mark: Yeah, that was an interesting detail to drop in there.

I’m curious how you found Kroenen’s death. Ever since his return in “B.P.R.D.: Hell on Earth—Russia,” he’s been gradually becoming more and more disillusioned with his role in the Apocalypse, and even the work he had done before. He’s practically been sleepwalking through his life for years now.

Von Klempt, however, he’s still hungry, y’know? This is one of those things where I’m interested to see if we’ll get some development in “Hellboy and the B.P.R.D.” After all, Varvara’s been aware of Von Klempt since “B.P.R.D.: 1946,” and he’d certainly be on her radar again after the events of “Hellboy and the B.P.R.D.: 1952.” I imagine Varvara would have kept tabs on him over the years.

Chris: I was very surprised by Kroenen’s death. It seemed to happen in passing without any real impact to the story. Considering that Kroenen has been a key character in the Hellboy Universe for a long time, I found it very strange for him to die in such an immaterial way. As for Von Klempt…I don’t understand why Varvara keeps him around? She took the souls of everybody around her and yet she keeps this Nazi around. I can’t get my head around it and I hope her reason will show itself in future issues.

On a separate note, a big highlight of this issue for me was seeing Sebastián Fiumara recreate art by Paul Azaceta, Peter Snejbjerg, and Laurence Campbell from previous B.P.R.D. miniseries. 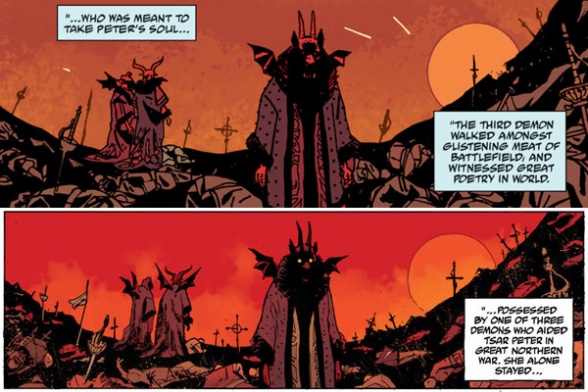 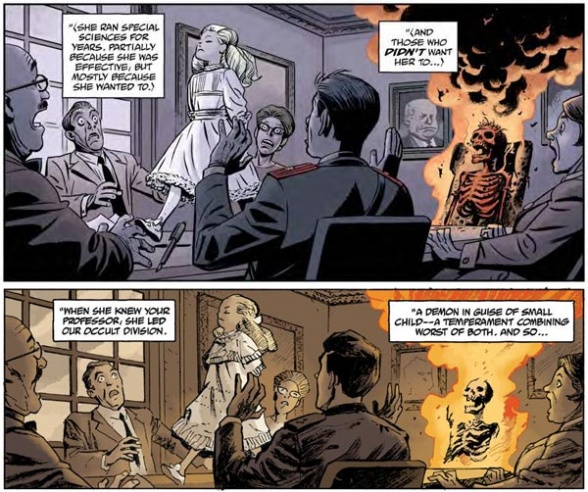 Above: “B.P.R.D.: Hell on Earth—A Cold Day in Hell” (art by Peter Snejbjerg)
Below: This issue

Mark: Yeah, Fiumara’s work has been fantastic on “The Devil You Know.” The way he uses panel composition as a storytelling tool always impresses me. Like at the end of the last issue, there was a battle going on, and in this issue there’s so much else going on, they don’t really have time to deal with the aftermath, so it’s covered in a single panel. The B.P.R.D. is victorious, but it’s a weary, distanced victory. Fiumara reduces in to black silhouettes in dust clouds, and it totally communicates everything you need.

Each issue of “The Devil You Know” is so packed, it needs an economical storyteller like Fiumara in order to work at all.

Chris: I am a little sad that this is Fiumara’s last issue on the series. However, at the same time I am very excited for Laurence Campbell to return. With the way this issue ended, the next one will definitely be a huge battle in New York, and Laurence does a great job with large, multi-person action sequences. A great example of this is his work on “B.P.R.D.: Hell on Earth—End of Days.” With another New York brawl on the horizon it is fitting for him to come back.

Mark: Oh, for sure. Let’s grade this one. I’m giving this one a 7.5. It’s in that awkward place wrapping things up from the last issue and setting up for the next. It’s serves a necessary purpose for the overall arc, but as a single issue, it’s not as satisfying. The core of the story revolves around the Bureau bickering and talking over each other, but that’s what the story needs to be right now.

Chris: This one is an 7.5 for me as well, and for all of the same reasons that you mentioned. Onward to New York!

Final verdict: 7.5 – This issue’s a breath before diving into the finale. If you were hoping for some headway into the Abe–Fenix plotline, you’ll have to wait a little longer yet.