Laurence Campbell takes over art duties for the second half of the ‘Pandemonium’ arc. Hold tight, this issue’s epic. 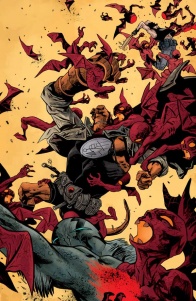 The B.P.R.D. arrive in New York to an immediate attack by cultists-turned-zombies and familiar demons.

Mark Tweedale: This issue is pretty much one extended sequence, so talking around spoilers would be annoying. So here’s your warning… 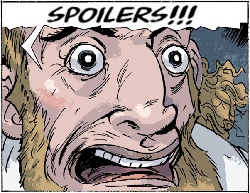 Damn, this is a impressive issue! I remember back when Laurence Campbell made his Hellboy Universe debut back in “B.P.R.D.: Hell on Earth—Wasteland.” In that arc’s final issue, Howards woke up and went on a murderous rampage in a sequence that blew our minds.

For me, this issue has that same feeling, but rather than being limited to a single scene, Campbell sustains it from cover to cover. This is a damn impressive issue of “B.P.R.D.: The Devil You Know.”

Christopher Lewis: I love the art in this one too. Campbell had me in awe from the first to the last page. The only thing that holds this issue back for me is the ultra fast pacing. There were numerous times that I thought the impact of events were glossed over by the continuous action. The book really felt like it needed to be told in two separate issues.

Mark: The pacing felt pretty natural to me. Considering the circumstances, I think it needed to feel like things were hitting our leads faster than they could deal with them. Campbell truly blew me away with this issue, both with the big stuff and small. I love the little panels of things like the statues crying blood. It such a Mignola-esque moment, and in the shadow of “Hellboy in Hell,” it’s a tremendous way to preface the battle to come.

Then getting to later sequences, with Campbell drawing New York in ruins, just like we saw all the way back in “Hellboy: The Right Hand of Doom” (a story published in 1998!), was mind blowing. It’s truly incredible to see something with twenty-five years of history behind it drawing to its end. And Campbell and Scott Allie know it too. They use it to their advantage every chance they can get. Dropping in those photographs from “B.P.R.D.: King of Fear” was a powerful way to give us that gut-plunging feeling that Liz must’ve been experiencing throughout this issue. For me, that was the key to keeping the story intimate, while simultaneously stepping back from the action and looking at the larger picture.

Chris: This book is definitely something special for the hard core fans. I loved Liz and Hellboy each seeing aspects of their calamitous futures coming to fruition before their very eyes. Liz with the ‘King of Fear’ vision and Hellboy with his numerous beast of the apocalypse visions.

You mention the “The Right Hand of Doom”’ prophecy. That’s interesting to me because I thought of it and the “Hellboy: The Wild Hunt” prophecy during the scene where Hellboy recognizes the red New York skyline and (I think) determines he is seeing his ultimate future unfolding in front of him. Thinking back to those stories, I am wondering what parts of the prophecies will come true. Will Hellboy unleash the army from Hell and ride a dragon as the beast is the apocalypse? 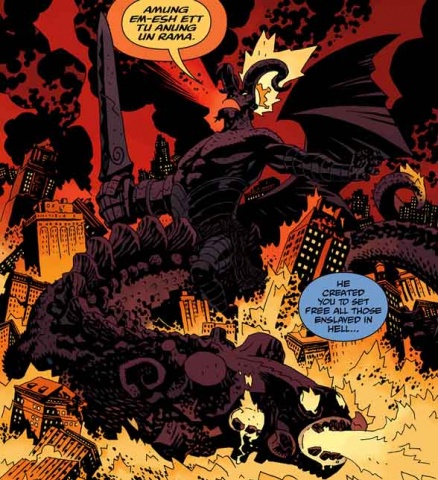 From “Hellboy: The Wild Hunt,” art by Duncan Fegredo

Will he die and afterward have somebody cut off his right hand (like the Osiris Club thinks they will do)? 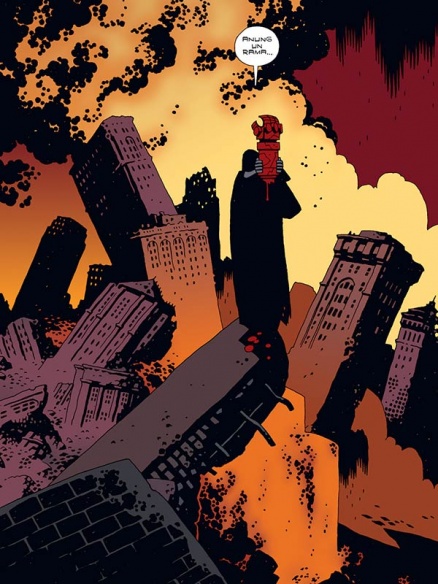 From “Hellboy: The Right Hand of Doom,” art by Mike Mignola

I don’t know, but with my pacing comment, it sure feels like we are racing toward an end our story. I hope not, but am starting to wonder.

Mark: That’s a fair call. It does feel like the eleventh hour, especially with all these visions coming into play.

On the topic of visions, it’s been pretty clear since “B.P.R.D.: Hell on Earth—Cometh the Hour” that Liz’s vision in ‘King of Fear’ #4 isn’t going to happen, at least not exactly as she saw it. And one thing I’ve wondered about ever since that reveal is what is it that changed the future? What sets this reality apart from the one Liz saw? And I feel like this latest issue answered that question for me.

We have a moment with the Homunculus (the B.P.R.D. HQ ship) about to crash into New York, and despite how impossible the task is to stop it, Liz fights it. No hesitation at all, she just throws herself fully into stopping it from crashing into the city. And I think that’s what sets the realities apart—that other reality was one where Liz stopped fighting. Ironically, being shown how hopeless the future is seems to have been what awoke the fighter in Liz.

Sure, she’s not going to stop the end of the world, but I don’t think that makes her fight pointless either. As I’ve said many times before, how these characters face the end is what’s important. Their actions will shape the next world.

Chris: I think you are right about Liz’s fight being the key to her changing certain outcomes of her vision. I do like that you brought up Liz not hesitating to act when the ship was going down. In fact I felt that all characters put their squabbles behind them in the heat of the fight. Hellboy being ready to get on the hull, Liz going after the demons, and Abe jumping out of the ship swinging. Even with all of the drama that has occurred in this series they were professional when needed, and it was nice to see.

Mark: Yeah, especially seeing Abe and Devon fighting side by side. I liked seeing the change in Devon—it’s been a long time coming. Just seeing him back in the field, showing that he’s actually a pretty good agent when he’s not stuck behind a desk, was great. Then taking that further by having him accept that as Ashley had told him, the people they were fighting were no longer people, added that extra kick of satisfaction. But the major thing was getting the beginnings of some kind of understanding between him and Abe… it was a small thing, very fragile, but something. Given the way this issue ended, I think that’s as much as we might get on this particular plot point. I find, however, that I’m OK with that. We got enough to say that change was possible, but that’s all. Paradoxically, being robbed of a satisfactory reconciliation felt appropriate.

Chris: Yeah, I can see that. It has been a storyline since the end of ‘King of Fear’.

Mark: We haven’t spoken much about Dave Stewart in reviews lately, even though he’s been doing incredible work on this title. The thing is, his best stuff isn’t the sort of thing you can show off in a single panel, a single page, a single sequence, or even a single issue. As I discovered while reading “Abe Sapien: Dark and Terrible,” Stewart gets involved in the story early on and builds arcs of color. It is fascinating to look back at the entire “Dark and Terrible” cycle and see how little green there is in the beginning, and how it creeps back in over the course of thirty issues.

“B.P.R.D.: The Devil You Know” is much the same. Stewart clearly knows the shape of the overall story and he’s crafting each issue to an overall plan. I mean, just look at the opening of “The Devil You Know” #1—right at the beginning Howards kills one of those big bat-faced monsters and he’s covered in blood. We know how Stewart loves to go really red with blood, so why is it muted here? 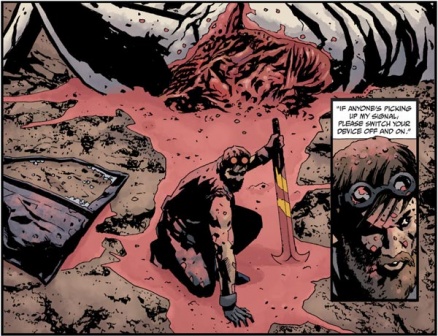 When you step back and look at “The Devil You Know” as a whole, the answer is obvious. Earth is about to become a new Hell, and the colors of Hell are rich red, so Stewart holds off on using that red only where it’s thematically relevant. Looking at all nine issues laid out, you can spot the scenes associated with Hell at a distance. 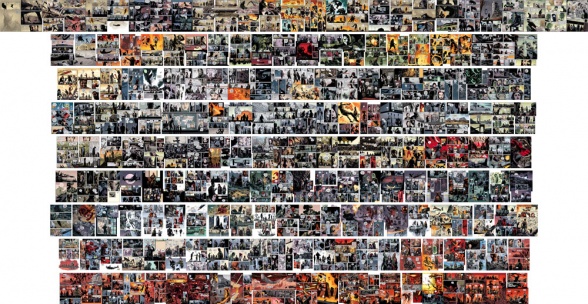 And just look how red this issue is! There’s even a color arc to it, starting with lower saturation, more pinkish reds, and then moving towards rich reds with accents of orange. And it’s not just in the reds that Stewart is doing this. Carrying over an element from “Abe Sapien: Dark and Terrible,” he uses a deep, cool green whenever Abe moves closer to his purpose. Again, you can easily spot the scenes at a distance here. Also rather interesting is the way all the B.P.R.D. scenes are cold greys with sickly yellows… a color palette Stewart established way back in ‘King of Fear’ during Liz’s visions of the future. Long before Liz’s flashes of those visions in this issue, the colors have been telling us we are at the doorstep of the moments in those visions.

Stewart’s work on “B.P.R.D.: The Devil You Know” is nothing short of masterful.

Chris Right on. We should probably grade this one. I am going to give this one an 8.5. Campbell’s art is top notch and the fast pacing is my only critique.

Mark: The fast pacing was a plus for me. I thoroughly enjoyed this issue, especially the work from Campbell and Stewart. I’m going with 9.5.

Final verdict: 9 – The scale of this story is huge, and the art rises to the occasion, paying off in a big way.