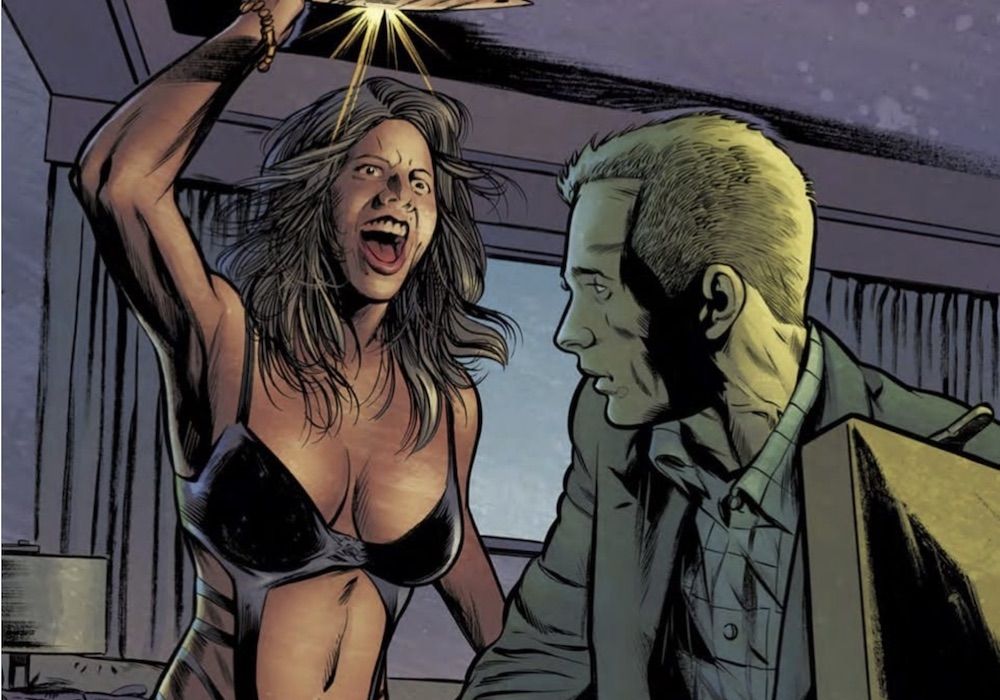 “Breakneck” #2 depicts Scott and Joe racing against the clock to save downtown Philly from a potential terrorist attack using a finely honed, strategic skill: bickering. 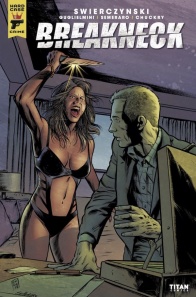 Cover by Simone Guglielmini
Written by Duane Swierczynski
Illustrated by Simone Guglielmini & Raffaele Semeraro
Lettered by Jimmy Betancourt
Colored by Chris Chuckry
All-new countdown thriller comic from celebrated crime and comics author Duane Swierczynski (Deadpool, The Punisher, The Wheelman), perfect for fans of 24! Joe Hayward has two hours to save Philadelphia! But can the white-collar everyman foil a madcap terrorist plot on a timer – even if it means working with the government agent in bed with his wife?

Pardon me if I seem flip, but as a grizzled veteran of modern crime and noir comics, I sure know what I like and, largely, what works. I’m particularly hard on this genre because it’s been done so well, many times over.

I firmly believe that “Breakneck” has potential as a series, but so far it’s not delivering much. Issue #1 came out of the gate swinging with big and boisterous action, but issue #2 just isn’t following through. Joe’s internal monologue reads more like an omniscient third party than how someone would actually speak to themselves in a crisis situation. What I like about the book is its unabashed reach for that hard-boiled crime edginess, but amping up the volume on this voice doesn’t work. The motel room was a nice physical constraint on the action in the first issue, but with a car chase kicking off issue #2 I’m too busy trying to parse Joe and Scott’s verbal conflict, the physical action, the omnipresent countdown timer and a location shift, to boot. The narration tips the story over the edge into confusion, and with time pressure comes a burning desire for everyone to be quiet and get on with it.

There’s also significant unevenness in the gravitas and humor of “Breakneck” #2. What wasn’t so apparent in a tighter first issue becomes overwhelming now as Joe and Scott hit the road. Scott’s references to truth serum are unnecessarily quippy and repetitive. Joe ping-pongs between baseless rage and crabby confusion without any insight into his true character. Both of these threads could be done well in moderation, but “Breakneck” doesn’t seem to appreciate how scaling back dialogue can often serve the larger mood of the piece. Instead, we’re overwhelmed with the addition of another character during the logistically painful gas station argument and key-juggling scene. Humor-wise, my high spot of this issue is, unfortunately, largely deflated by the narrative noise. I do appreciate when “Breakneck” goes crude, because it’s not afraid to take a chance. Amelia beating Scott in the backseat of the car with a dildo is funny, and is done with the right amount of absurdity to just about land. However, the comedic moment should be breaking some serious grimness and tension that just aren’t present, so it feels like a cheap effort instead of a tactical breather or cool set-piece.

Some of this bigger narrative misstep I lay at the feet of Swierczynski, while some of it can also be attributed to uneven art. Page layouts are largely unremarkable, which is not necessarily a bad thing on its own. However, Guglielmini and Semeraro go for realism and a spare line that’s immediately at odds with the consistently unsymmetrical character faces. Joe and Scott struggling with each other looks stilted and strange, and the panel of Amelia pumping gas in the later pages has basic perspective issues. Some high-contrast inking adds shadows to daytime scenes that are inappropriate for the light sources in the environment. There’s a touch too much shading to support the realism as well, and that effect could be better deployed in some action lines to liven up the page.

Chuckry’s colors are competent, but two characters in muted blue coats against a dismal East Coast urban landscape is visually uninteresting, and the skintones appear sallow. Betancourt’s lettering is clear and concise, with little additional styling to add flavor to the narrative. I can’t sit back and judge whether a more cartoony or surreal style would suit “Breakneck” better or build some more mood, but what I can say is that the attempted realism falls flat and the book lacks pulp character to set it apart from the pack. “Breakneck” #2 is too muddied to be stark, too goofy to be gritty and too somber to be slick. I do think the story has potential, but I expect more meat and cohesion in a 32-page issue than what we’ve got in our second installment.

Final Verdict: 5.0 – “Breakneck” #2 deflates some of the first issue’s potential with muddy dialogue, craft issues, and a lackluster tone in what should be taut, nail-biting action.