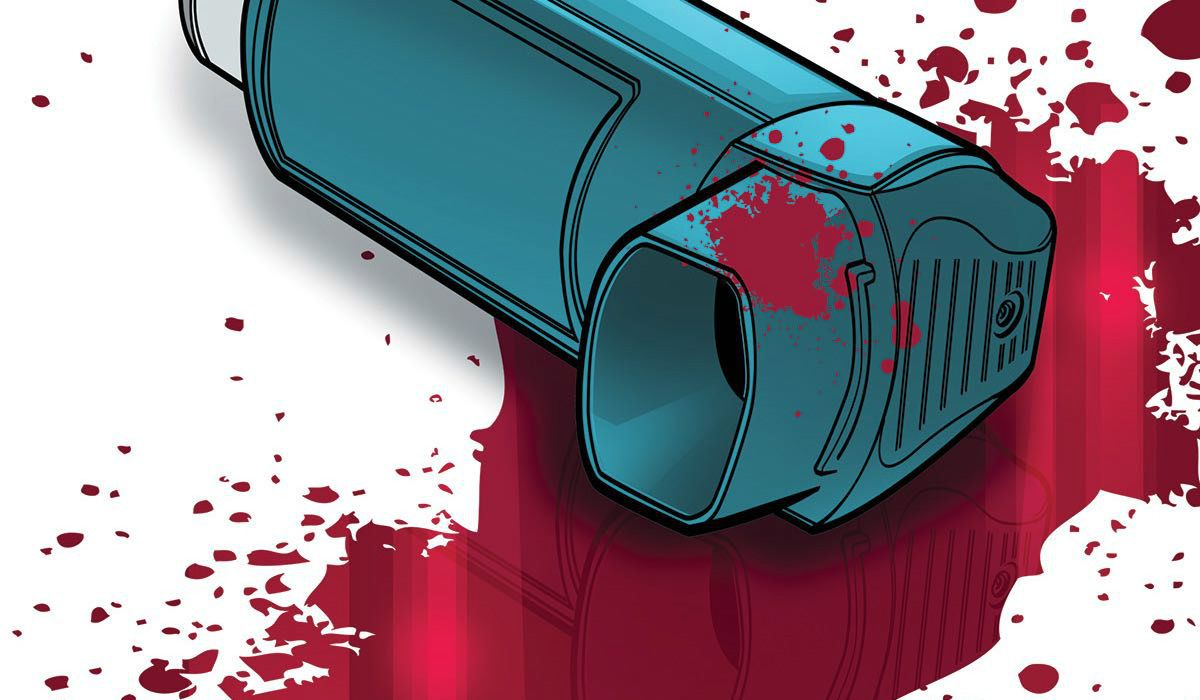 Like all compelling sci-fi stories, “Breathless” #1 laces its fantastical narrative with an important real world message, asking questions about the daily struggle of millions of people paying thousands of dollars just for the chance to live. In a world where folks are being charged for the very ability to breathe, Shand and Rodriguez ask, who are the real monsters? Read on for our review, which contains mild spoilers. 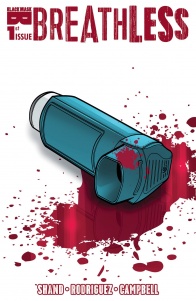 It’s Buffy the Vampire Slayer if the villains were big pharma.

Scout Turner works as a cryptozoologist, examining and cataloguing supernatural creatures for scientific purposes. When she discovers the cure for asthma in the venom of a new breed of monster, she quickly finds herself on the run from Kenilworth Pharmaceuticals and the monsters that they’ve hired to kill her. With no one by her side but her clueless assistant, a morally ambiguous succubus, and her geriatric dog, Scout goes on the run… but in a world controlled by money and drugs, can she escape the reaching claws of a medical monopoly?

From Pat Shand (Destiny NY, Guardians of the Galaxy) and Renzo Rodriguez (Hellchild) comes this healthcare horror story about the monsters creeping in the dark… human or otherwise.

Let’s get a tired comparison out of the way first: yes, “Breathless” #1 has a Buffy the Vampire Slayer vibe about it. There’s the grounded, relatable women leading the narrative, the sharp, witty dialogue and the backdrop of a fantastical world filled with monsters that is used as an analog for real-life issues. But these are all truths that identify “Breathless” on its own, without having to compare it to a hugely successful franchise (although popping that in the solicit obviously isn’t going to hurt).

While the comparisons are fairly accurate, and don’t hurt this book (there are worse things to be compared to), “Breathless” establishes itself fairly early on, pushing beyond the comparisons into its own thing. Scout Turner is a scientist for Sweet Hollow Laboratories, a company that carries out acquisitions and experiments on the very real monsters that plague the world. A freak accident in the lab causes her asthma to be completely cured, and it’s within this plot thread that the book’s purpose starts to become clear.

In the back matter to “Breathless” #1, writer Pat Shand describes his issues with Big Pharma and the concept that asthma sufferers, among thousands of others, are literally being charged to breathe. Rather than making a definitive statement about this issue, Shand states that the intention of “Breathless” is to merely open the door to the conversation, and ask the questions in a way that is still accessible and fun. To that end and more, this book is a success.

There’s an effortless nature to Shand’s script, which handles dialogue with a breezy, witty charm that plays off the frightening imagery in a clever way. Scout and her colleague Grace-Eisley talk to each other in a way that’s admittedly a little faster and smarter than real-life, but it’s far from the stilted, unnatural back and forth you can sometimes find. In fact it’s a genuine pleasure to listen to the characters interact with one another, and Shand utilises the way they talk to each other as a way of communicating more about their personalities. Again, this isn’t something to take lightly, as with some books all of the characters can “sound” very similar.

Grace-Eisley is especially compelling, in that from her very first scene we learn so much more about her from the way she’s talking than what she’s actually saying. Her conversation style is fast, sort of flighty and filled with “like” and “oh my god,” and the way that Scout reacts to her topics of conversation tells a lot about their relationship. It also helps to contextualise the more fantastical elements of “Breathless.” If Grace-Eisley can have a mundane conversation with Scout about her morning commute while there is a monstrous being on the operating table between them, it tells us instantly that this is a standard part of their lives.

The clean lines and sharp inking of Renzo Rodriguez give “Breathless” an open and engaging style. The focus on character expression and body language is a good choice, as it’s ultimately character that drives the narrative forward. Characters look directly at the reader when they’re talking, in a way designed to draw you into their conversations. The bold, crisp colors of Mara Jayne Carpenter bring the pages to life, and for the most part the palette is bright it’s fairly natural. This is contradicted by the strong, unnatural purples of the monsters throughout, most directly seen in the Hisser on the operating table, which has various shades of purple organs, but then later we see the more subtle purple hues of the alleyway in which Scout visits the Succubus, or even the walls of the home Scout shares with her Aunt.

Purple is commonly used in fiction to denote the ominous, the illusory, the fantastical. It’s an unnatural color and, separate from the dangerous reds or sickly greens, purple is an unsettling color designed to take us out of our comfort zone. The Hisser is alien and unknown, so it’s purple. The Succubus in the alleyway has an edgy, ominous air to them, their conversation with Scout loaded with tension. Similarly, Scout’s relationship with her Aunt is tense and terse, and the frailty of her elderly relative is emphasized here, so both of these moments are shaded in purple to reflect the subtext of the scenes.

“Breathless” #1 is an engaging and exciting start to a book about two colleagues and friends fast becoming trapped in a dangerous situation. More than that though, Shand is positioning the series to provide a rare viewpoint on the very real battle against Big Pharma that millions pay for with their wallets every time they require life-saving medication. Those grander themes are touched on here in the first scene, but this is something that will come back in a stronger way once the series gets going. As it stands, “Breathless” #1 dedicates itself to drawing you into Scout’s monstrous world in a compelling way.