There was a lot of unrest in Briggs Land when it was the country’s largest secessionist compound. What happens when it undergoes a hostile takeover? Check out our review below and watch out for some mild spoilers. 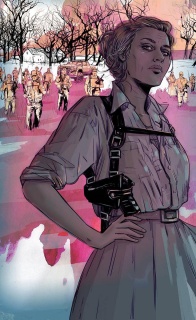 Briggs Land, nearly a hundred square miles of rural wilderness, contains the largest antigovernment secessionist movement in the United States. When matriarch Grace Briggs wrests control of the operation from her incarcerated husband, she sparks a war within the community — and her immediate family — that threatens to bring the full power of the federal government down on their heads.

Quick disclaimer: Brian Wood is kind of a creep and it’s unfair to go into this review without acknowledging that. It’s also unfair to everyone else who had a hand in creating “Briggs Land” by choosing to ignore their work so I can keep making jokes about how crossfit taught Brian Wood why people should stop giving him shit for harassing female comic creators. Seriously. So, with that out of the way, let’s actually talk about “Briggs Land”.

“Briggs Land” #1 comes at an interesting time in our history. In case you forgot, The Bundy family made headlines earlier this year when Ammon Bundy initiated the armed takeover of a wildlife refuge in Oregon. The Briggs Family may not be handling armed takeovers of government buildings, but they’re definitely in the same ballpark. From the first issue alone, we can see that the Briggs have been involved with at least bigotry, murder, and the attempted assassination of the president. That last deed was enough to send their patriarch, Jim Briggs, into the slammer where he gave instructions to his wife Grace to keep his empire afloat. Grace eventually decided that she’d had enough of working thanklessly under Jim and take over the compound for herself. Considering that Jim still holds a major influence over the members of the Briggs compound, who aren’t exactly the most progressive folks to begin with, Grace finds herself at odds with her neighbors, friends, and family as she tries to get her life’s work back on track.

It’s a strong premise and one that finds its grounding in Mack Chater’s artwork. His style evokes a sort of true crime atmosphere, one that evokes Michael Lark’s work on “Gotham Central” or “Sean Phillips’s “Criminal”. And like those two other series, “Briggs Land” relies on a lot of deceit. Not only has Grace manipulated her way into leading the compound, but there’s no telling who, if anyone, is supporting her coup. Even Grace and Jim’s sons serve as collateral in their new cold war as there’s no telling which parent the boys are willing to follow. Alongside the Briggs are a pair of federal agents who are there to uh… I think they’re just their for exposition. There’s a brief moment where it looks like one of them might be a spy for Jim or something but nah. They’re just here to tell us who the kids are and to off-handedly mention how Jim once tired to kill to the President.

Although “Briggs Land” #1 shapes itself up to be a shadowy game of chess, it doesn’t do that great a job establishing who the pieces are. Briggs Land itself feels hollow, with the only real members being Grace and her kids. There’s something about sister-wives too but it’s not clear if they’re Jim’s or the boys’. As much as “Briggs Land” tries to take a more thorough look at the type of anti-government people who would strike out on their own, the compound itself just feels like one sane woman and the few other people who may or may not want her dead. If Grace was able to take leadership of the compound so easily, it was because there was barely anyone present to oppose her.

“Briggs Land” #1 has a lot of good things going for its present, but it lacks the kind of detail to really give the story any heart. Who lives in Briggs Land? What motivated them to declare themselves independent of the government? And is there anyway to find out this information other than from the two FBI agents who may or may not have wandered off the set of “Bloodshot: Reborn”. They even do that thing in “Bloodshot: Reborn” where they get bored and bang each other in between scenes. I know this may be a very petty issue to pick on but why are the federal agents from “Bloodshot: Reborn” in a Brian Wood comic?

Final Verdict: 5.3 – There’s a lot to like about “Briggs Land” #1. The premise is strong and in a political climate where the radicalized right’s voice is becoming more and more prominent, a look into the anti-government culture that led to events like the armed takeover in Oregon seem inevitable. “Briggs Land” takes that another step further by not portraying these characters as caricatures. Still, it doesn’t present them as very interesting people either.