“Britannia” is back and now that readers have a better understanding of what this series is, getting excited for the prospect of more is easier than ever before. Despite the hellish landscape of “Britannia” that protagonist Antonius Axia fought through in the last series, the character remained largely unscathed at the end of 4-issue mini. “Britannia” publisher Valiant Entertainment barely waited a few months before the sequel “Britannia: We Who Are About To Die #1” was published. The same creative team is back except for the switch between colorist Jordie Bellaire for Frankie D’Armata, the same supporting cast rejoins the party along with a few new elements. 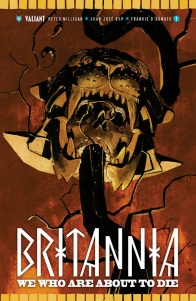 Britannia: We Who Are About To Die #1
Written by Peter Milligan
Illustrated by Juan Jose Ryp
Colors by Frankie D’Armata
Letters by Dave Sharpe

Fifty thousand Romans stand on their feet, watching from the rafters of the coliseum with captured breath as Achillia, a gladiator unlike any that Rome has seen before, faces incredible odds – one lone warrior against five of Rome’s greatest. Such is the tradition, when a female gladiator enters the fray. When the carnage is complete, the coliseum roars its approval as Achillia stands victorious. Now, only one match away from winning her freedom, she has begun to gain renown. The women of Rome, suppressed by their husbands and fathers, have noticed. The men of Rome, husbands and fathers to a growing horde of women entertaining ideas of independence, have noticed as well.

On the other side of Rome, a strange mystery swirls through the Palatine Hill. In the dead of night, down winding alleys, Rome’s elite swear that they see visions of a blood-soaked Apollo walking the city…visions that are driving them mad. Even more are becoming sick with weird fever god-dreams. Panic ensues in the city. The Chief Vestal, Rubria, is arrested by Emperor Nero and threatened with crucifixion unless the deadly curse that’s fallen on Rome is lifted. She asks Antonius Axia, hero of Britannia and Rome’s only detective, for help. She offers only one clue…the gladiator Achillia.

Taking a break between superhero battles and heading to the Roman colosseum has always been a nice change of pace for Valiant. Axia is back with a violent new adventure initiated with a heavy supernatural twist. Similar to the last series, “Britannia” gets most of it’s energy from the otherworldly energy of penciller Juan Jose Ryp who is given supernatural horror scenes right out of the gate in this issue. The new mini-series amps up the horror aspects and sets up a violent new mystery right from the start. After the bizarre, happy ending that neatly tied up the first installment, I’ve never been happier to see all hell brake loose in a comic. This new series adds a great element of suspense and places a thicker emphasis on mystery this time around.

Watching Axia’s mental state deteriorate over the course of this issue is an absolute delight. Overtime he starts to break down and become enveloped in this mystery. Hopefully the creative team is able to take better advantage of him in future installments as his overall personality is still a bit too flat here. Besides being a little spooked and enjoying the detectioning parts of his job, Axia is mostly passive at least up to this point. There’s a strong cliffhanger that teases the what the shape of the rest of this mini-series could be towards the end of the comic, but still doesn’t give Axia the attention he deserves.

A lot of information and characters is crammed into this book and Axia is not privy to all of the information that readers have. This effect really amps up the suspense of this comic and will likely start to payoff in future issues. This is the case where multiple read-throughs might be required to get the handle on the onslaught of information assaulting your sense in this issue. One of the interesting parts of this book is that it is hard to tell just how much of this story is supernatural and which are based in reality.

While Ryp’s pencils are an absolute delight in this issue, the duller palette of Frankie D’Armata smooths out some of the impressive detail that Bellaire cultivated in the original series. All of Ryp’s action scenes and character moments are depicted with lots of great character, giving the comic tons of subtext underneath all of huge action sequences intense character beats. Aside from a bevy of incredibly suspenseful supernatural elements and standard fight scenes, Ryp toys with panel layout late in the chapter building to one of the most visually interesting scenes in Britannia to date.

This comic delivers on the introduction of Achillia teased by Valiant in the marketing information. Due to the nature of the period in which the comic takes place, there’s an inherent element of sexism permeating throughout Rome. Achillia is a great introduction to the cast who is able to seemingly duke it out with some of the strongest fighters of the coliseum. This is a strong introduction for another female cast member sitting next to the excellent Rubria of the Vestal Virgins who gets to throw out some wicked threats while showing signs of vulnerability here.

I couldn’t be happier to return to “Britannia,” especially when there are this many twists pulsating throughout the new mini-series. Instead of taking the slow-burn approach, Milligan, Ryp and company introduce enough twists here for “Britannia” to be even more exciting than ever before. While retaining and Bellaire and giving Axia more of a personality would have made this installment even greater, it’s impossible to deny that this issue is a huge leap forward of quality over the previous mini. With only three chapters of the comic left, there’s precious little time for Milligan to expand on all the mysteries he’s laid out in the story this far.

Final Verdict: 8.0: “Britannia: Who are About to Die #1” is massive leap forward for the quality of the overall series.