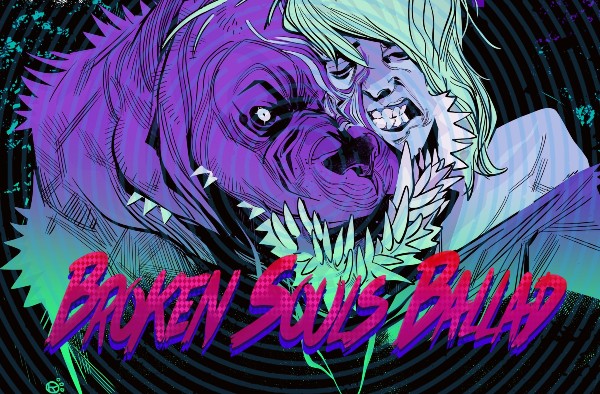 Last year we learned about Black Caravan, Scout Comics’ upcoming horror imprint. “Broken Souls Ballad” #1, one of that imprints offerings, rests squarely in the horror genre. We’ve got tormented teenagers, monster mutations, and blood and gore galore. However, for as much as “Broken Souls Ballad” #1 excels at showcasing evil, it’s not without its structural faults. Also to note: “Broken Souls Ballad” #1 includes references to self harm and includes homophobic slurs in the context of bullying situations. Spoilers ahead as well. 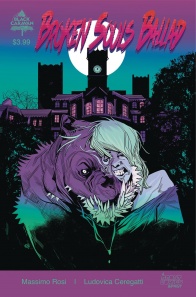 Saint Abigail’s Institute creates monsters — and those monsters are teenagers! The story begins as several teens discover that they possess out of the ordinary abilities, in each case related to their psychosomatic conditions. The resulting trauma caused by this horrific discovery leads them to stray from their normal teenage lives; some to seek answers, others in a desperate attempt to escape their terrible fate. Meanwhile, a mysterious organization working for the government begins to track down the kids with the goal of “bringing them home.”

Let’s start with what “Broken Souls Ballad” #1 gets right. First off, this is a story about monsters. Not your goofy Frankensteins or sleek werewolves either, but true, grotesque, monsters. Think the middle point of an Anamorphs transformation, but put in a blender. Think the uncanny bear-beast from Annihilation. Ceregatti is on top form, and we’d love to see what kind of descriptions she got when she designed Markus Bowers, one of the main protagonists. Markus Bowers is your classic eighties kid: a little scrawny, a full mop of blond headbanger hair. He differs, however, in the fact that he’s got a feral dog-head that sprouts from his left shoulder. And it’s not just one vagrant appendage — when Markus is truly overtaken by whatever mutation ails him, his whole body becomes superimposed with that of a dog monster. It’s brutally depicted, and awesome to look at — if you’re into that kind of thing. Teeth sprout from his face as the dog face melds with his like a helmet. Talons grow between fingernails. It’s a gruesome arrangement which makes for some impactful, violent scenes.

Ceregatti also knows how to draw clear, but also complex expressions. This is put on fully display during a beach scene toward the middle of “Broken Souls Ballad” #1, a group of bullies rag on one of Tom’s friends (he’s the other protagonist, though his monstersona is less clear as of issue #1). There are a lot of characters in this scene, and Ceregatti does a great job conveying a multitude of expressions across the dynamic group of teens. We see anger, rage, disgust, fear, and more. All in all, it’s legible and clear.

Other parts of “Broken Souls Ballad” #1, however, are much less legible. None of this feels like the distinct fault of Ceregatti’s, more so that there are some blocking and lighting issues. For example, in an early series of panels, we see a figure — shrouded in total blackness — playing a piano. It looks like Markus’ house, and it looks like he’s playing piano after committing a grisly kill. At the same time, it’s unclear if it really is him, and then in the final panel something jumps out of the darkness and…takes him? attacks him? There’s a spurt of blood, but not much else that’s legible. When we see Markus later in the story, he’s somewhere completely different, and it appears as if whatever happened in those four panels has had no bearing on the plot so far. While some dissimulation at the author’s hands is necessary for tension and intrigue building, in this moment it felt more tedious. There wasn’t enough for us to see, and therefore not enough to make an inference or theory as to what’s going on. In this moment, “Broken Souls Ballad” #1 falls a little flat.

Art issues continue towards the end of “Broken Souls Ballad” #1 as well. Rosi and Ceregatti serve us a fun fight scene and we get to see Markus, in full dog-man-monster form, face off with an agent. This scene should be a slam dunk, but there’s an awkward moment where Markus delivers a gnarly neck bite to the agent that definitely lands. There’s blood and everything! But then, in the next panel, the agent…is unscathed? There’s nothing in “Broken Souls Ballad” #1 that indicates the baddies have regenerative powers, and there’s no visual indication that that’s happened as well. This whole bite-but-not-injured thing is very odd, and totally deflates the power of the scene. On top of that, there seems to be a blocking issue in the scene, and Markus and the agent switch places during the fight. As we mentioned before, these strange moments — perhaps just errors– distract from the drama at hand. Hopefully, further issues of “Broken Souls Ballad” are more organized in this regard.

Rosi’s script is passable, and at times feels quite clever. During that beach scene, for example, Tom and his friends have good banter about their D&D characters, and the whole thing feels very “teenager” in a way that helps build character. Characterization in general, though, is quite light in “broken Soul Ballad” #1, which is fine, as this issue focuses more on mystery and set-up. We’re sure we’ll get the salient character details further down the road. From a plot perspective, there’s a lot of mystery. It’s unclear how the pieces of “Broken Souls Ballad” #1 fit together, but that’s not what’s concerning.

The main writing issue in “Broken Souls Ballad” #1 is nitpicky, but the issue arises enough time that it gets hard to ignore. It’s mostly a dialect thing. Oftentimes, characters speak in a way they contract certain phrases, but then don’t contract others that you’d imagine they would, given their established speech patterns. Consider, for example, Markus’ adoptive father. In one speech bubble, he speaks with a hillbilly affect, but by the end of his dialogue, his dialect becomes more refined that feels a little incongruous. In a similar vein, in the beach bullying scene, the bad guy, who’s just some throwaway 80s high schooler, seems almost too particular in his insults. His whole group has this weird, psuedo-Shakespearean vibe, saying things like “Don’t you think that his fat navel and small tits make a sad face” unironically, or “if you’re a nice little man, you should be able to take your lumps,” using a piece of 1930s boxing slang that seems out of place for some 80s punks. Moments like this break the immersion, taking the reader out of the story and into the odd vocabulary choices.

“Broken Soul Ballad” isn’t a lost cause by any means, even if the first issue has some head scratching moments. It’s still brilliant to look at, and there’s enough going on with the main characters that we’re curious about what’s happening next. Horror fans will probably be able to look past the issues in “Broken Soul Ballad” #1, and the rest of us will tentatively hold on to see what comes next.

Final Verdict: 6.7. An original horror story mired down by some confusing choices.