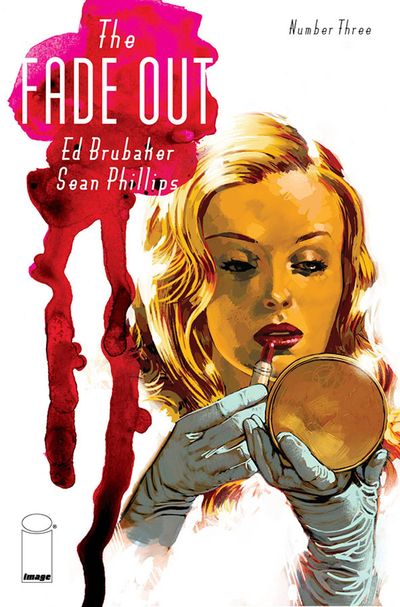 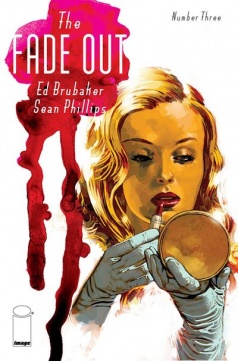 BRUBAKER & PHILLIPS’ new crime noir masterpiece is just getting started! Remember, every month THE FADE OUT has exclusive back pages articles that are only available in the single issues.

The story being told within “The Fade Out” seemed so straight forward in the first two issues. Next-big-thing actress is found dead, struggling screenwriter and blacklisted friend try to figure out what happened, while heartless executives cover up the crime. All in all, it’s a nice little mystery. With Ed Brubaker and Sean Phillips, it was never really that simple at all, and the true breadth of this world starts to become apparent in this issue.

Taking a break from the moping and drinking by Charlie Parish and Gil Mason respectively, this issue focuses on Mr. Thursby, the head of Victory Street Pictures who has been pulling strings and calling in favors to hush up the true nature of Valeria Sommers’ death, and Maya Silver, the young actress desperate to replace the deceased starlet. These two people are on the complete opposite on the Hollywood power system, but they have one thing in common: they want the film to go forward, and will make difficult choices to ensure this outcome.

Any notion that this is an old fashioned noir mystery should start to dissipate as soon as Ed Brubaker chooses to begin the issue with a flashback to the 1920’s featuring a proto-hippie orgy in the California mountains. It doesn’t contribute anything to the whodunit plotline of the series present, but it is an incredibly formative character moment for Mr. Thursby, and sets the tone for all of his actions. He is a man who felt bliss and freedom, only to be shackled down by the studio. In a way, he probably feels just as much like a slave to the system as his actors do.

The storyline featuring Maya Silver plays off the stereotypical tale of a young actress subjected to the original casting couch of the old Hollywood studio system. Maya has certainly been a victim of a horribly sexist system, and been taken advantage of in terrible ways, but Brubaker writes her as an intelligent person who is able to wrest a small amount of agency towards her own path, albeit in a very unexpected way. Brubaker uses this familiar story to paint both Maya and Mr. Thursby as characters of real depth instead of just bland archetypes.

One of the most interesting choices that Brubaker has made in “The Fade Out” is eschewing the traditional first-person narration of comics, and instead uses an omnipresent third-person narrator. It still informs the reader of the characters’ inner thoughts, but in a very detached manner. It almost seems like it is lines from a screenplay, which would fit the setting, but without the visual of the script formatting found in Grant Morrison’s “Annihilator”. With the text displayed as is, it really feels like the series is a great noir novel, with many layers still left to explore.

“The Fade Out” is a book where the vast majority of scenes feature guys in suits and ties with almost identical parted hairstyles talking in the shadows, and it never once feels boring or drab. What Sean Phillips does with a limited canvas is really incredible. Despite taking place in a succession of offices and dressing rooms, every scene is filled with detail that makes every setting visually interesting.

Phillips operates in tandem with colorist Elizabeth Breitweiser to create the overall tone. It feels like a world that is trying to be full of glitz and glamor, but is constantly covered in grime. In addition to the constant shadow, the colors are muted and worn down. It almost looks like these images were created years and years ago, and the once-bright colors have faded away, and now only echo the past. Breitweiser often includes one monochrome color that dominates a scene, like the golden orange of a glitzy set or the yellow of the harsh film lights which counterbalances the ever-present shadow. At a quick glance, it appears to be a very dark book, but upon closer inspection reveals subtle color tones and combination that swirl together and play off each other to provide each scene with a different look.

One stand-out piece of art is the constant smoke, especially from the cigar of studio security head Brodsky. It never looks cartoonish, or strangely laid on top of the image, but instead Phillips has risen to the challenge of creating lifelike looking smoke that flows and wafts. It’s a small thing, but only speaks to the level of detail that the art team brings to the book.

This issue represents a change of pace for the young series, and signifies the intention of the creative team to avoid any expected or repetitive narrative structure. “The Fade Out” is not just about solving the question of who killed Valeria Sommers, but about the consequences that her death has on the close-knit studio system she was a part of. Ed Brubaker uses unexpected flashbacks and unique third-person narration to reveal the complicated personalities of two characters at the opposite end of the Hollywood spectrum. Sean Phillips and Elizabeth Breitweiser continue to create detailed and evocative art with the careful mix of shadow and de-saturated colors. For noir lovers, history buffs, and mystery enthusiasts, “The Fade Out” has already set an incredibly high bar for itself, and there’s every indication it will continue to challenge and surpass expectations.

Final Verdict: 9.0 – The creators have a clear path for the series, and there has yet to be a single bump on the road.