“Into every generation a Slayer is born: One girl in all the world, a chosen one. She alone will wield the strength and skill to fight the vampires, demons, and the forces of darkness; to stop the spread of their evil and the swell of their number. She is the Slayer.” 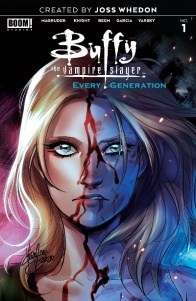 This special issue of “Buffy the Vampire Slayer” boasts a 42 page spread showcasing three new stories. One featuring the titular, beloved Slayer, a young girl in the Philippines in 1910, and a young woman in 1947 Dublin, who shares quite a few similar traits with Buffy Summers. Like 2002’s “Tales of the Slayers,” these stories give an extra look at Slayers through the years that honors both this newest iteration of the Buffy-Verse, and all versions that have come before.

The first story, ‘Where All Paths Lead’ is the longest of the three and it feels the most out of place in a collection like this. Where this feels like it should be focusing on other Slayers throughout the decades, this gives Buffy the usual front and center treatment. Little more than the typical fight scene and banter with Giles and Cordelia, Magruder writes a decent script that is tied directly to the main series and does dabble in some major spoilers. So for those of you who were expecting a simple one-shot to stick your toe into the new Buffy canon, you have been warned. Buffy fights and teams up with some demons, breaks her way through the Hellmouth portal, and goes after an entity known as the Hellmother.

It’s an OK story and Lauren Knight’s artwork gives it a fun ‘animated series’ vibe. Character designs give us just enough of the actors they’re based on. She nails Sarah Michelle Gellar’s eyes, if nothing else, but the emotion and soul of the character is all there. It has a lot of energy and plenty of the classic Buffy tone. Guimaraes’s color work matches the energy of the line work. Bright and full of varying shades, it also takes on a great cartoon look. Overall this is a decent chapter in the series, but it is ultimately not very memorable. It also belongs as its own issue, or collected elsewhere.

‘The Hilot of 1910’ follows a young Slayer in the Philippines. When children and pregnant women are targeted in their village, winding up dead of mysterious causes, a demon known as the Aswang is the culprit. Known for feeding on these innocent people, it is clear that this Slayer has a new task on her hands. Known as a traveling hilot, this Slayer is both just that and a healer.

Morgan Beem and Lauren Garcia craft a really interesting story. It feels both at home in the Buffy-Verse and like something in many other horror/fantasy tales. It is a great way to expand this world in a different way. Beem pulls double duty as co-writer and artist. Her work is reminiscent of Tyler Crook’s work both in “Harrow County” and various “Hellboy” titles. It looks so similar I had to double-check that it was him. It has both a dark magic and whimsical tone to it. The light line work paired with the barely-there colors that feel like a water color wash that could be blown away by a heavy breath also lend the beautiful look of the entire story. It calls back to real international legends that have been passed down through generations. Which, of course, is a perfect tone for this issue. This is quite possibly the best story in the collection, but there is plenty to like throughout the whole thing.

The final story is all at once funny, engaging, scary, and emotional. ‘The Sisters of Angelus’ takes us to Dublin, Ireland in 1947. This generation’s Slayer is a young woman named Una. She and her grandmother/watcher(?) run a pub and haven’t always been the most welcome women in all of Ireland. Over the years people have gotten used to them, but they have few real connections and even fewer friends. When a woman named Kerry, who is basically Una’s only friend, comes in with rumors of her being with a young man are swirling through town. Ashamed because she believes everyone will think she lost her virginity out of wedlock, Kerry decides to move into a local convent to be taken care of until the rumor storm blows over.

When Una doesn’t see her for a few days she becomes worried and decides to check out the convent, which turns out to be run by The Sisters of Angelus. One of the many convents that was completely turned to vampires by Angel when he was the soulless and very evil Angelus. Caitlin Yarsky’s script does a fantastic job of world building, and giving us a brief, but nicely detailed look at these new characters. Una could possibly be one of the best new characters to come into the canon. She and her companions fit perfectly into whichever version of Buffy you enjoy. These characters and this story also pull from known Buffy lore and dialogue, which was a nice callback.

Yarski’s artwork is beautiful as well. It walks the line of classic Buffy comics and some of the darker Disney animated adventures like Atlantis or Treasure Planet. The character of Graham fits into that style perfectly well. As both grandmother and Watcher, she and Una look after each other, and she uses magic and science to create protection spells and weapons for Una to use. It’s a fantastic addition to the universe. A great script, matched with beautiful art drive home the emotions and storytelling in this final story.

Final Verdict: 7.5, A collection of the expanded Buffy-Verse, that ranges in quality, but the highlights are fantastic, and the low points are still decent, if not unnecessary for this issue. Fans of the current canon will definitely want to pick this up, but for those who can’t let go of the original timeline (like me) the latter 2/3’s of this issue will appeal to everyone.