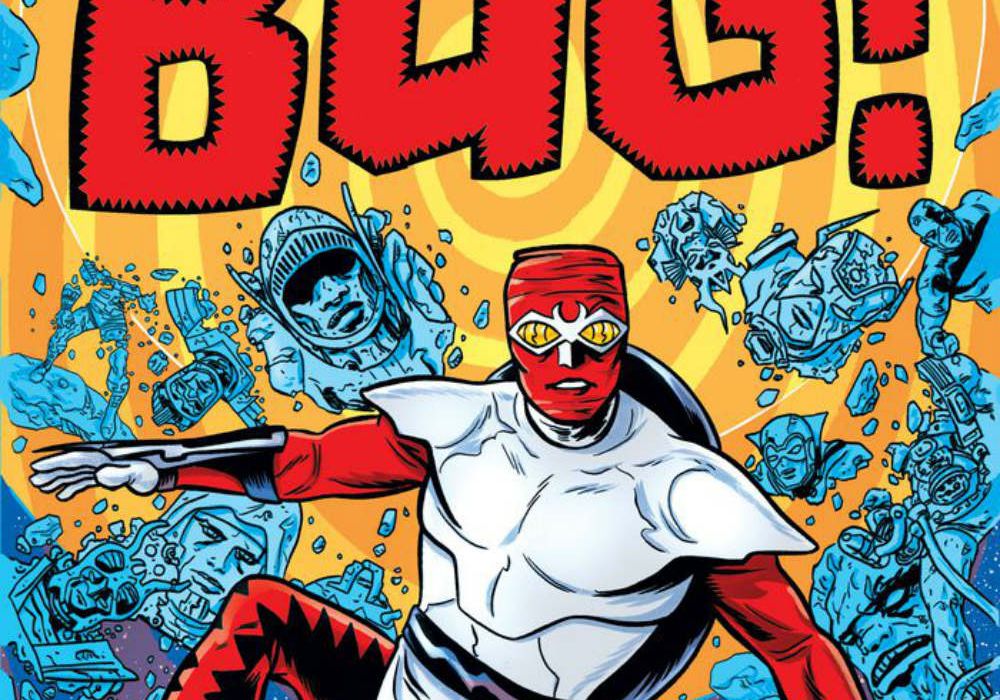 Gerard Way’s Young Animal imprint has been landing hit after hit, and now they’ve signed up the Allred family to pen a Jack Kirby New Gods character – Forager, the ultimate cosmic outsider kid. For those of you who still need convincing on this pitch, read on and watch me try not to gush too hard over this creative team. 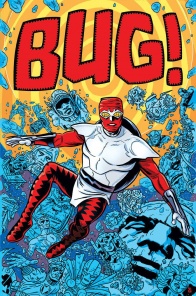 An all-new Young Animal miniseries begins! Forager is just one of the Hive before he breaks out of his cocoon and finds himself in a mysterious house in an unknown realm. There he meets all kinds of strange creatures: a ghostly girl, a talking teddy bear and otherworldly weirdos that have literally jumped out of his worst nightmares. But these interdimensional oddballs are nothing compared to the evil General Electric, who is on the hunt for a reality-bending metal that could alter the fabric of life itself. To stay one step ahead of him and preserve the multiverse, Forager must travel through alternate dimensions to seek the metal and, hopefully, catch up with that cagey stuffed bear. If he does it, will he finally be able to distinguish himself as a New God?

To tell the truth, a lot of my expectations were subverted coming into this book. I dove in without reading the solicit, expecting a classic Kirby style brawler. What is presented here, however, is much more thoughtful and pensive. The Allreds have created a comic that is tonally aligned with something like “The Sandman” than Kirby’s original “Fourth World”, and in turn something much more Young Animal-esque. The story continues from a plot point of the Mike Mignola drawn “Cosmic Odyssey”, giving us the dreams of a Forager who’s just been killed. As Forager is aware of his death, we get some interesting character work through him, as Forager is a little dazed and hesitant of accepting reality at times. The Allreds also expertly have Forager wrestling with an identity crisis as shown in the first page – is he a bug? Is he a New God? It makes more a much more complex character rather than just a straight forward rebel.

I love Lee Allred’s redeeming characterisation of the Jack Kirby Sandman here. When the character appeared in Neil Gaiman’s “The Sandman” run, he was characterised cynically, feeling more pathetic than heroic. Lee presents us with a Sandman who genuinely feels like the real-deal Guardian of the Dream Stream. This depiction of the character summarises well later in the book, when Lee writes Sandman in a tight situation saying ‘I AM THE STUFF DREAMS ARE MADE OF’ without boasting, purely as a factual comment.

Lee also uses effective symbolism in telling the story and what I’m assuming is foreshadowing later plot points. I love the use of a teddy bear as a prophetic figure earlier in the book. Using that plus the ghost girl feels like an effigy of the innocence that Forager lost after he died. Later on, we get a great splash page that takes advantage of the Domino Effect metaphor that was being explored. Each domino explodes around Forager, all depticting characters tied to the obscure parts of DC’s mythos all shouting at Forager. We get that this is foreshadowing later in the story as the Sandman domino repeats itself, giving us an interesting way to speculate the rest of the story and watch how the pieces will fall into place.

Michael Allred’s (whom we will affectionately refer to as Mike for this review) art has incredible synergy with Lee’s scripting that the pair seem to effectively bounce of each other’s brilliant ideas for the issue. Every page seems to build upon being even madder than the rest, giving Mike plenty of opportunity to go wild. This example occurs when we see the Sleeper scenes repeated – the first time, we see some pretty gross monster characters antagonising Forager, but later, we see the same scene but with Skrull-esque reptilians, on top of Sandman and his lackeys joining in on the action. Having this built up and anything-goes feel reinforces the setting of the dream state, creating immersive yet similarly unbelievable action.

What strikes me every time I’m witness to Mike’s art is how effective it is at blending 50’s Lichtenstein-esque facial work with the rough-and-tumble visceral action of Jack Kirby. His panels here are no exception. The page introducing Sandman has both Forager and the Dream Stream Guardian tumbling about in acrobatic poses, never once folded into a static bodily position, always in a constant fluid stream of movement. This gives the sequential storytelling nature of the issue a well-paced flow and forward momentum. We never stop for too long on one panel simply because Mike’s art is constantly directing us through the plot. The Lichtenstein influence is clear too – the first page has a single panel depicting Forage screaming through his mask, along with other panels of shock and emotions at their most extreme. It builds upon the dramatic yet almost cheesy nature of the plot, once again supporting the Dream setting.

One thing that’s not easy to nail in comics is a consistent and unique setting throughout an entire issue. Not only do the Allreds give us this, but they expand and varies it throughout different dream states. We’re brought into the comic with a Gothic style ancient house, which we never truly leave, however Mike Allred works to give it a charming personality – the basement is full of mannequins and instruments, there’s decrepit spiral staircases, and portraits hidden in the corners of panels (see: page 13, middle panel). This is all riffed on throughout the issue – after Forager’s premonition, he walks around in a spiral pattern setting accentuated with Kirby Krackle all around. We get a repeat of the first scene, but with the house crumbling with debris later in the comic, and to top it off, we get the corny General Electric’s pulp style laboratory. Never have I felt so completely aware of where I am in a first issue than I have here, and Mike knows how to play with this sense in the best possible way.

To cap off the family trio, Laura Allred provides brilliant color contrast between Forager and the rest of the creaking house. This could easily have been a dull palette in the hands of anyone else, but thankfully Laura makes Mike’s characters pop by using an all primary colour scheme against the faded greys and greens of the background. Laura shows she’s equally deft in using color for sequential storytelling with subtle techniques. One such happens when Forager is facing General Electric, and dives over him to catch Sandman’s whistle. Laura greys out each time Forager appears in a mid-air flip, only focusing on the final Forager to give a sense of movement. In theory it doesn’t seem like a huge difference, but it means the difference between startling awe and confusing disbelief for the reader.

The Allreds delivers yet another Young Animal hit with “Bug! The Adventures of Forager”, with one of the industry’s greatest creative teams. Everything is in here – action, philosophy, and plenty of hidden cues and foreshadowing to keep you on board for future issues. While it may not have been what I was expecting, the Allred family have subverted my expectations to great satisfaction.

Final Verdict: 9.4 – Forager may be an outcast of the New Gods, but with the Allred’s helming his book, he’s sure to be no stranger to the high tier books at DC and Young Animal.