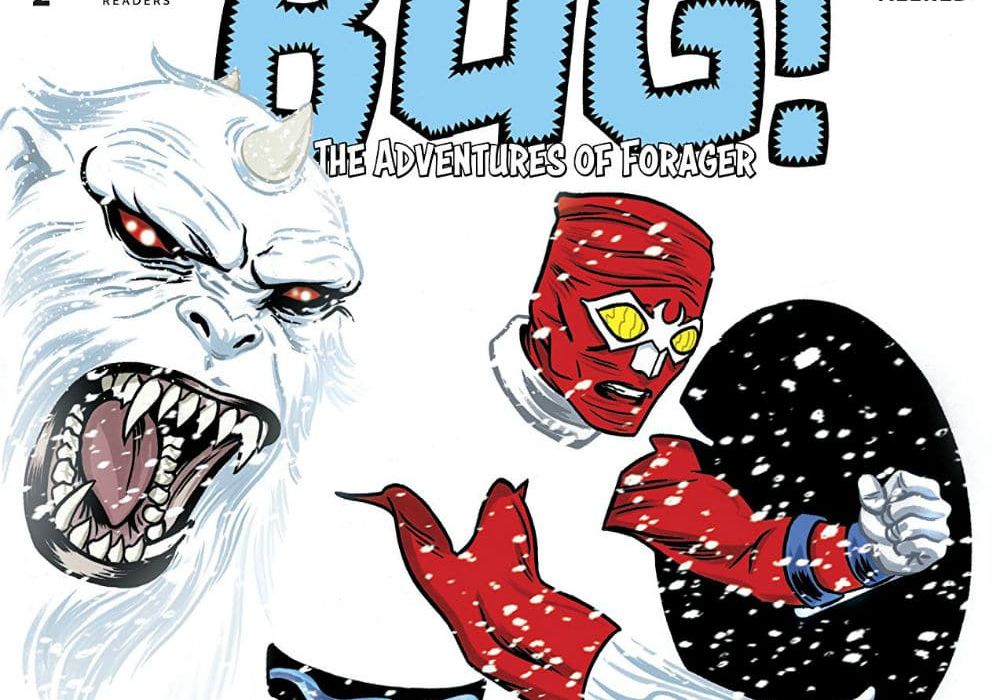 The Allred clan releases their second dose of Bug into comic shops. The dominoes they set up in the first issue keep falling on Forager and fans of the forgotten New God alike. So, are they picking up steam or slowly going sideways? 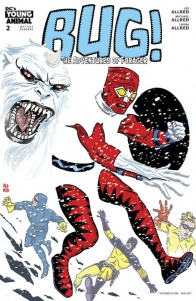 Bug’s tumble through dimensions ends up taking him back in time, to the start of General Electric’s mad scheme. In the remote Himalayas, the mad scientist leads his robot army in search of a precious magical metal. Sandman, Sandy, Blue Beetle and the Losers are already out in the snow looking to stop him, but only Bug knows that the fate of the multiverse hangs in the balance. Plus, we begin a new backup feature by James Harvey (Masterplasty, We Are Robin).

While not the same juicy slab of meta-commentary that the debut was, “Bug! The Adventures of Forager” #2 still crackles with Kirby-infused enthusiasm. And by the gods, elder and new, it’s gorgeous.

The credits list both Lee and Michael as storytellers. So it’s hard to tell where one’s work ends and the other’s begins. What is certain though is just how alive the artwork feels. It’s lively, yet crisp – like biting into a fresh apple and letting the flavors dance on your tastebuds. Their lines are bold, but retain a fluidity that’s both silky smooth and deceptively simple. Everywhere, Laura Allred’s colors pop in all the right places. There’s a vibrancy to these pages that burns off so much energy into the atmosphere that it’s near impossible not to pick up some residual traces yourself. And getting swept up in that whirlwind creates a feeling of youthful exuberance, not unlike sitting down with a Kirby comic for the first time when you’re 6 years old. It’s in breathing that quality to life where this issue shines brightest as a tribute to the King.

But for all the tipping of their caps, this still feels wholly like an Allred creation. That ’60s pop art aesthetic – circular panels cutting into the regular rhythm of rectangular ones, psychedelically spiraled backgrounds – lives as a seamless extension of the swirling journey they’ve thrusted their hero upon. “Bug! The Adventures of Forager” #2 even opens with Bug being spat out of a portal of Ben-Day dots. In fact, the whole first page is a splash that follows him through the sky as a half-dozen iterations twist and tumble to gain a sense of balance before crashing onto snow-capped terrain. It’s a loaded opening, both in acrobatic entertainment and in giving the impression that Bug and the readers are finally getting at least a little solid footing after the mind-warping first issue.

And that footing stays in place most of the way. Sure, it all feels a bit like DC sangria – Sandman, the Blue Beetle, The Losers, Nanda Parbat – but despite the odd mixture, it all runs fairly straightforward towards the nefarious General Electric. There’s some initial confusion at seeing a squad of WWII G.I.s hoofing it through the Himalayan snow-drifts. But Bug fashions a Mother Box from a busted radio, which projects a folded over roll of celluloid film. The Allred’s stuff panels into this film to show the mission briefing that sent the Losers on a similar tack after the General. It’s a clever bit of artistry that gets both the characters and the readers up to speed on just what the hell is going on. Of course, that Ben-Day portal from the start sent our hero him back in time, so some elliptical, paradoxical ramifications are in order. “I love it when an ouroboric self-contained time loop comes together,” says one character after Bug swoops in for the rescue.

Unfortunately, the existential musing from last month are non-existent here. Whereas that issue had a strong thematic focus, “Bug! The Adventures of Forager” #2 feels much more plot-driven. Don’t get me wrong, I’m in favor of any plot that leads to a stampeding horde of abominable snowmen being used to distract and attack an army of robots with 2-prong electrical plugs for heads – awesome character design, by the way. It just feels like there’s some measure of tonal discrepancy between the first and second issues. The former had a Bug who was searching for meaning, for an understanding of his place in the world, especially in the light of his supposed death.

This month, however, gives us someone far less introverted, someone characterized by quick action and quips more than anything else. I do love the lilting, playful rhythm of Allred’s script, especially as Bug charges the Losers up a mountainside. “It’s called strategy,” he shouts. “When life hands you a lemon, follow the produce truck back to the warehouse and exchange it for the fruit you want!” Granted, the plotting of this issue requires a man of action – and the Allred’s nail that in both look and feel – but I miss the man of contemplation we were first introduced to.

But “Bug! The Adventures of Forager” #2 hums along in spite of that deviation. Small tics, like Bug kick-flipping his shield up into the air or limbs flailing free of holding lines mid-fight sequence, saturate the boldly inked artwork with vitality. The Allred’s might not be asking the same, weighted questions they did initially – actually, they’re not really asking any questions here. And that’s just fine. There are times to solve life’s great mysteries and there are some times when all you really need is a New God, a couple G.I.s, and a horde of yeti fighting robots on a mountaintop.

Final Verdict: 8.0 – Not what I expected after reading the first. But then again, the first wasn’t what I’d expected either.