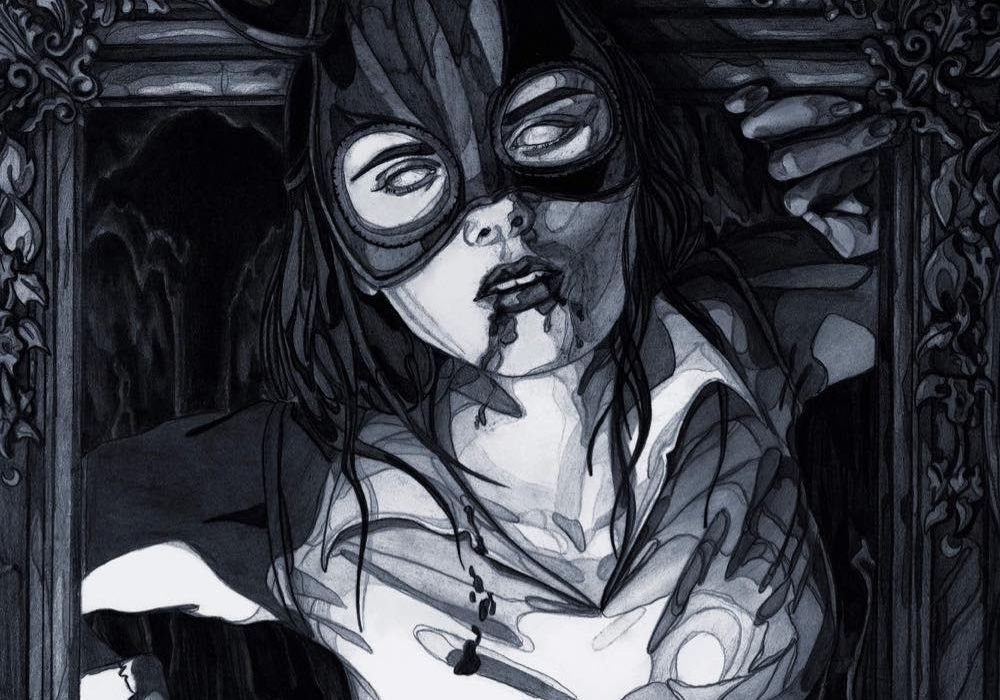 An insane father. A cave under a house. A mystery spanning decades. Some Mild Spoilers Ahead 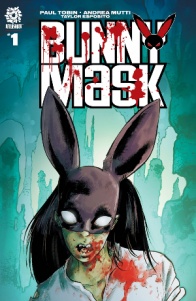 Fourteen years ago child safety nurse Tyler Severin and school official Juliette Nemski went out to Tom Foster’s rural home to check on his daughter Bee. Bee had been absent from school for nearly two weeks and there seemed to be something fishy going on at the Foster home. Upon arrival, Juliette and Tom quickly found out that the situation was much more harrowing than either could have possibly imagined.

The very first page of “Bunny Mask” ranges from odd to unsettling to horrifying, just within its six panels. A false sense of care is given to the young girl Bee Foster by her father Tom. We know something is off right from the start, but when Tom begins chipping into her teeth with a hammer and chisel, all bets are off. It’s after this shocking opening that we are introduced to Juliette and Tyler. On their way to the Foster home to check in on Bee, Juliette fills Tyler in on the facts…and the presumptions. They know there is something odd about the household. Dad is eccentric, kid misses random stretches of school, mom has been missing for ten years, presumed drowned in the nearby lake where she was last seen. What they don’t know is that Tom houses various secrets; some in his head, some under the house. Tom will stop at nothing to keep these secrets his own, and believes he is on a mission from the voices in his head to keep these plans moving forward.

“Bunny Mask” #1 lays a lot of groundwork. So much in fact that delving into too much of the plot will not only spoil the issue for new readers, but coming plot threads as well. As the layers of Tom’s insanity come to light for Tyler it rapidly becomes clear that Tom has little to no grasp on reality. He is responsible for not only the death of his wife, but most likely other missing persons in the area. What isn’t clear are Tom’s motivations or what his goal is, outside of what the voices in his head are telling him. Even little Bee believes the voices to be real. She helps her father when she can, not seeing herself as imprisoned like the others that have died. She too thinks the voices are real, believing to have heard them in her own head. Is it all just a delusion that father has passed to daughter out of will and obsessive compulsion? Or is there a more sinister, possibly supernatural force at play?

Paul Tobin’s script is nicely paced and evenly balanced. We get a lot of information, but it never feels like an exposition dump. We are learning about the characters, their pasts, the town, and so on both in a way that is educating us and the main characters in a truly natural fashion. Nothing weighty or overblown. Dialogue feels like discussion that is true to life. As the issue expands both its lore and the time frame in which it sits, readers will quickly realize that they know far less than they may believe when first cracking into the issue. It is a fascinating and scary first issue that leaves you on your toes from start to finish. Tobin also finds a way to work in what feels like multiple horror and thriller sub-genres into a single issue. It’s clear that there is going to be no easy answer and no easy path moving forward in the series.

It’s rare when a horror comic can evoke some really visceral reactions and this one does a fair job of being creepy all the way through and nailing a shocking cliffhanger twist of an ending. This first issue is nothing short of a page turner and at the end all I wanted was to have issue two in my hands. There are quite a few elements throughout that all horror fans have seen one time or another, but the way these puzzle pieces click into place is fresh and original straight through. This first issue holds a lot of story in its pages, and while it would be easy to say that certain things could have been expanded on and others could have been held onto until future issues, there is no denying that the pace and ideas are well thought out and have earned their place right at the front of this narrative.

The artwork by Andrea Mutti captures an every day, North American vibe. The work is nicely detailed, feeling both clear, but with a dream-like distance between it and the reader. Mutti works within a style that feels like a loose hand, feeling less deliberate than it actually is. It’s a mystery novel or an urban legend that has been told over and over, leaving a foggy mist over everything. Whether in flashback or present day within the story, it all feels like a memory getting dredged up from the deepest bowels of the mind.

Fans of work from artists like Tyler Crook or Guy Davis will see a kinship to their work in these pages; especially in the design of settings and the color work. The limited palette is all about mood and emotion. It is never bound by its lack of expanded palette. It is all a beautiful watercolor with some very unsettling, spooky, and startling subjects. Every page and panel is either objectively beautiful or at the very least a captivating moment.

Final Verdict: 8.5, “Bunny Mask” #1 is an original and truly shocking first issue that will leave both horror aficionados and newcomers alike with their mouth agape by the final turn of the page.