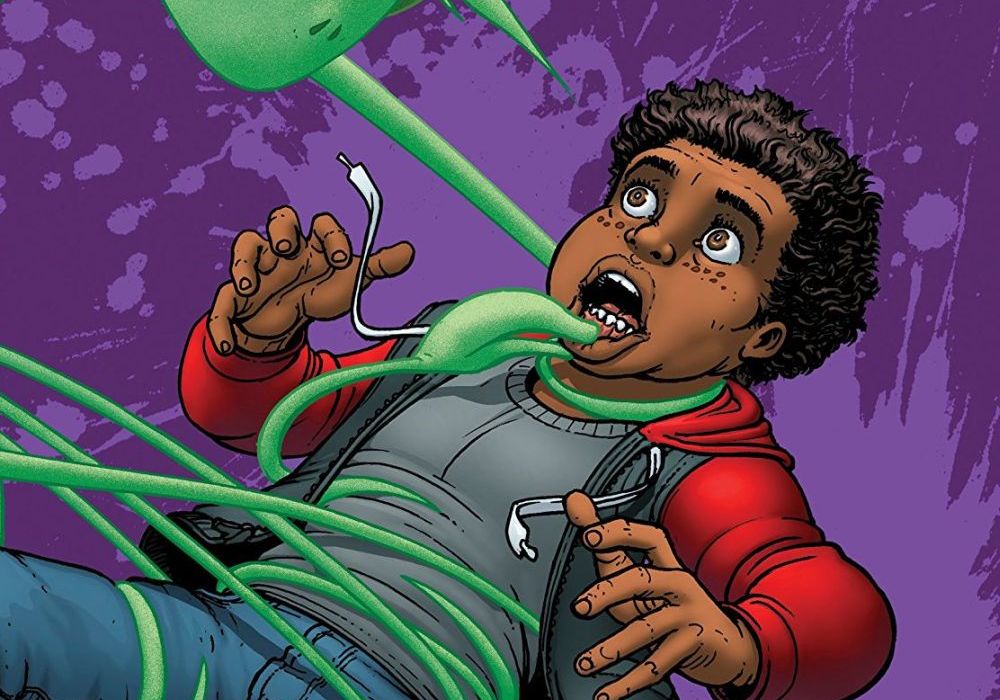 What do you get when you combine anti-drug satire with adults writing teenagers and some very smash-able aliens? An admirable swing and near-hit on a punchy second issue. 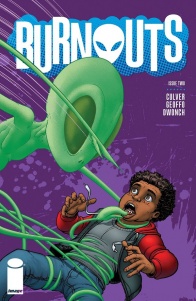 After learning aliens are real, Andy goes on the run-from his family, his friends, and especially the Burnouts! But the Burnouts have other plans for Andy: namely, to teach him how to get high and smash aliens. Being wasted is just the price you pay to save the world.

“Burnouts” is a great premise – saving the world one spliff and alien-headed home run at a time – but it’s lacking a little lustre as we dig deeper in issue #2. Geoffo’s art takes the spotlight here as Andy rejoins his wise-cracking crew to embark on what was one of my favorite activities as a bored suburban kid: cow tipping. Or trying to, at least.

My biggest hang-up is that I don’t think a car ride and a cow-tipping adventure is enough action to sustain a second issue, even if your protagonist is a teenager with a lot of time on his hands. The issue reads a little flat, with extended sequences of getting into and out of cars, and literal swings and misses. If paced well, you can break down a simple action scene into dynamic strips and pages that’ll keep your readers’ attention, but “Burnouts” ends up prolonging what could be done in two or three pages, or even a splash. The slower pace feels forced rather than measured, and the issue leaves me with the impression that it’s exactly what second issues often are: filler, or scaffolding for the next set of issues.

Put another way, this book feels like it’s more of an all-ages story than for a mature audience. I don’t need truly gruesome stuff or gritty adolescent drama to merit the book’s rating, but it feels just a little juvenile in its ambitions as well as its subject matter. That’s a bit of a letdown.

That said, there’s nothing wrong here. Andy’s confusion and clumsiness are endearing, and while the kids’ dialogue is groan-worthy in places, I’d like to note that it’s difficult, if not impossible, to write teenage utterances that ring true in any era. Taylor Swift references aside, Culver does pretty well, and an argument can be made that the brittle edges are a satirical take on the sinister drug users of all those anti-drug campaigns none of us listened to back in our youth.

Geoffo’s cartoonish style suits the book’s tone, and the alien design is at once adorable and weird. These strange, cephalopod-like creatures aren’t entirely original – they’re a bit like smashing a ‘50’s pulp alien together with a Mass Effect-style hanar (think luminous, poetic squids) – but they’re functional, and the color work pops nicely against the nighttime blues and shadows. Andy’s possessed parents bring a definite Jhonen Vasquez vibe in the first few pages. The kids’ expressions are delightful, and there are a few design touches that you could miss if you’re not looking hard enough, like the creative team’s choice to show the entire group in various stages of scaling the farm fence instead of in a panel series. Those moments prove that time and care go into making this book, and hint at deeper potential.

Dwonch’s lettering does the job, albeit without much definitive style. Instead of heaping that critique on one member of the team, I hold it up as an example of what could really make this book sing. When it comes to lettering here, I want effects that are a little stranger, and while I understand that’s hard to do with the art style, a little more of the team’s attention to that kind of detail would serve the series well. The colors are similarly serviceable. All of the choices are tight page to page, with my personal favorites being the work on the alien as I mentioned above, and the possessed cows. The palettes are moody enough to suit the story, if a little generic otherwise.

I might be belaboring a point because “Burnouts” #2 is a decent second issue, but I’m left wanting more and comparing it to similar satirical pulp forays in recent past (“Ash vs. The Evil Dead”, for example). Series like that may have extensive trans-media histories to pull from, but that doesn’t mean “Burnouts” can rest on its premise for too much longer without digging in and giving me something really original to latch onto. I give this book a lot of credit for going for humor instead of grit, but a comedic take on aliens isn’t enough to make a book stand out these days.

Final Verdict: 7.0 – For a second issue, “Burnouts” #2 slows down its action just a little too much to suit its wacky concept, and the series is in peril of losing steam. The next issue needs to pick up the pace a bit to keep me reading.