“By Night,” the newest maxi-series from “Giant Days” and “Bad Machinery” scribe John Allison promises a fantasy world, a mysterious disappearance, and more of that trademark Allison dialogue. What it delivers in its inaugural issue is something a little different. Something a bit less clear. Beware, spoilers await. 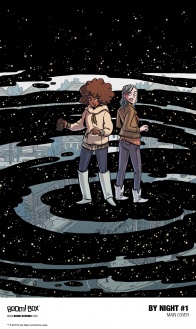 Aspiring documentarian (and actual Chemistry major) Jane has recently reunited with her former best friend Heather, amateur urban explorer. When a trip into an abandoned industrial building leads them to another world, their plan begins to unfold—create a documentary about the world and become filthy, filthy rich.

The other side of the portal is filled with monsters, magic and a chance for a whole new life. All they have to do is step through…

“By Night” is not off to a fantastic start. Part of me wants to say it’s because of a tonal clash between the art and the dialogue while another part wants to say that it’s because the characters don’t feel fully realized yet. But I think the main problem with this first issue is it reads more like an issue zero instead of an issue one. There’s also a lot about this town and these people that we just don’t know about yet. The mystery isn’t even brought up until more than halfway through and even then, it doesn’t feel important. Very little is actually revealed.

That’s part of the mystery and every good story reveals its characters slowly over the course of its run but here, it doesn’t quite connect. Part of the disconnect lies in the characters’ lack of endearing qualities. Allison is quite adept at making wildly different and whole characters, just look at “Giant Days.” Here, though, it’s shallower. Pieces of each character are missing and everything feels forced which, going by the character’s interactions, is only natural.

The tone of the issue is up in flux as well. Does it want to be a world-hopping mystery featuring two lapsed, dynamically opposite friends? Or does it want to be a look into the slow decay of a dying town, and the ways that decay seeps into the people who get trapped there? Does it want to be a slice of life, a full-on mystery, a drama, or a coming of age story? Right now, it’s a mix of these, which can work, but it’s currently akin to a tempo tear. The mystery wants to move fast and raise questions, the slice of life wants to meander and establish a day to day before breaking the cycle. The coming of age story wants to focus on Jane, establishing who she is and what she’s dealing with, while the drama wants to establish the state of the town and have Heather disrupt Jane’s life.

This is not a flaw of the story, although it can feel like it. Heather is actively trying to get back together with Jane despite them having grown apart and this tension is palpable. Heather is annoying only because she is trying so hard. Her actions feel forced and over-the-top because they are. The true Heather is visible for only one page, where she sits with her father. Her smile completely disappearing and her tone becoming notably sourer. It’s a great moment of characterization but, again, something holds it back.

These can all work together but at the moment, they’re working against each other, all in service of moving the plot along. To move Jane and Heather to the factory to find the portal.

The smaller, subtler moments are there, like in aforementioned bar scene, and a few choice panels, like Heather’s look of disgust when talking about the woman her dad dated, but beyond that, it doesn’t quite mesh until the last two pages. It’s here that everything seemed to coalesce, starting with the darker imagery of Heather, bathed in the cosmic shadows. It’s here that the writing slowed and the art sped up and questions out of curiosity instead of frustration began to be asked.

Take much of my critique of the art here with a grain of salt. Allison’s writing, at least for me, has become so tied to his and Sarin’s expressive art styles that any deviation from them was bound to produce some friction in my reading experience. Much like a new season opening, it can take some time to get used to it. I am aware of this and I wonder what brand-new readers think of the issue. For me, it’s too inconsistent to love but there are enough ideas and enough small moments of endearing characterization to keep me coming back. Maybe next issue will change my mind retroactively.

Final Score: 5.6 – Love the last two pages, the rest is a bit of a mixed bag. Story and character clash as “By Night” #1 tries to find its footing prior to the inciting incident.