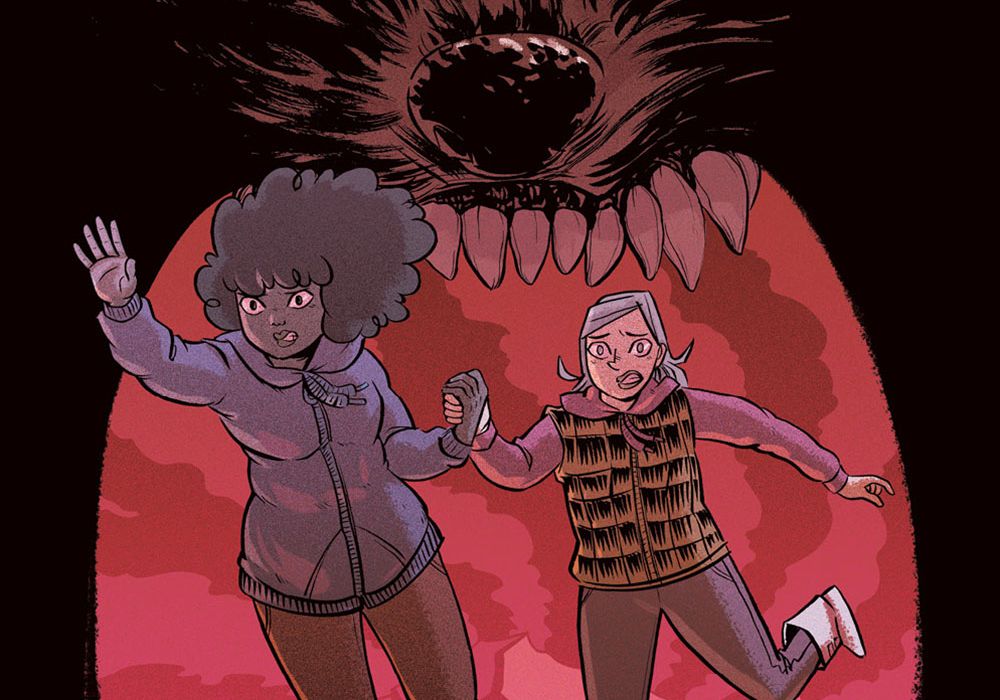 John Allison’s comics are burnished jewels of sequential storytelling, filled with young eccentrics and theatrical but genuine dialogue. With “By Night,” Allison and his collaborators have introduced new American characters who are just as quirky as their English progenitors. 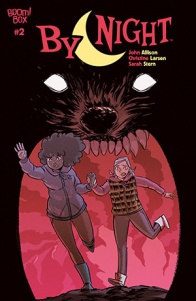 After meeting a friendly new face in the alternate dimension they’ve stumbled upon, Heather (eagerly) and Jane (reluctantly) agree to venture further in. With their trusty camcorder to record what they find and an inhuman new buddy, there’s no turning back now!

John Allison has a way of presenting characters that feel fully-formed even if we have only just been introduced to them. Comparisons to Wes Anderson films for anything idiosyncratic are overused, but there is a common thread in the way that Anderson uses the same voice actors to build a kind of familiarity with a certain character archetype. Beyond that, Anderson’s characters often seem like the sum total of a bag of character tics, quirky behavior, and arch dialogue. There’s something similar going on in John Allison comics. While he doesn’t have the benefit of an actor’s voice, there is a familiar and comfortable way that his characters speak, with a kind of sardonic and worldly-wise deadpan rhythm. It’s seems both timeless and perfectly attuned to the demeanors of modern youth.

Allison also has an ear for dialogue, even if it’s unlike any dialogue you’ve ever actually heard, and the words spoken by his new series protagonists, Jane and Heather, reveal snippets of the young women’s personalities. Like the premiere issue, “By Night” #2 is wryly funny and the word balloons seem to bound across pages, floating above Jane and Heather’s heads as they slip back into their long-dormant youthful rapport, even as they seem to put aside their efforts from the first issue to casually but cleverly one-up each other. There’s a kind of stream of conscious effortlessness in the scripting that’s also evocative of Neil Simon-esque banter that’s been updated for the 21st Century. With the second issue we even get to see how these girls came by their dry and prickly humor honestly in Heather’s interactions with her father and Jane’s late-night tête-à-tête with her mother. Both interactions also reveal why the two girls feel compelled to return to the portal by the issue’s end, and it’s more than just a youthful sense of adventure.

Early in this issue, Jane and Heather get to meet three of the inhabitants of the world they entered at the conclusion of the first issue, and they are unlike anything you might expect of your typical portal-world-dwelling denizens. Unsurprisingly though, they are exactly what you might expect from Mr. Allison, and Christine Larsen brings these critters to life with an unfussy cartoonist’s line. Their depictions along with their anachronistically comic timing fits right into the series aesthetic. Who would have thought that a skeleton would have a working knowledge of Laverne and Shirley? It could be argued that the book’s wolf man is nothing new, but the way Allison and Larsen run counter to the typical feral lupine depiction is darkly comical and just as threatening.

But make no mistake, this issue maintains a playful, pop culture-referencing tone even as it runs above the counter melody of 20-something ennui. Larsen’s illustrations are a perfect pairing for Allison’s sensibilities and continue the tradition of successful collaborators who can eke out another layer of whimsy in Allison’s unexpected plot twists. If the issue has a failing, it’s that there is really not a true feeling of emotional suspense that Heather and Jane may meet real danger or be trapped in the fantasy world they’ve discovered. But like those Wes Anderson movies, that doesn’t seem to be the point of the exercise. If there is one to be made in the early goings of this 12-issue series, it might be that these two young ladies needed something to shake them out of the doldrums of their rudderless lives. It’s a familiar device, placing ordinary people in extraordinary circumstances as a means for character development, but “By Night” seems to ask the question if anything can surprise us anymore outside of a trip to another world.

The best thing that can be said about “By Night” at this point is that readers have no inkling where the narrative is truly heading, and that’s a lovely thing to experience in a monthly serialized story. The exposition has been handled in the most organic of ways, and while we have seen glimmers of what the girls will ultimately find in this other place, we don’t yet know what it is, why it’s there, or what connection it has to the former and long-missing owner of the dilapidated estate that housed the device that was the instrument of their conveyance. Knowing Allison, we can expect that the details of the fantasy world and the mystery of the missing drive chain magnate to converge in the most unexpected and delightful of ways.

Final Verdict: 7.5 – “By Night” #2 is another meaty and rewarding read from Allison that makes up for the lack of an emotional punch with escalating creativity and endearing character interactions.