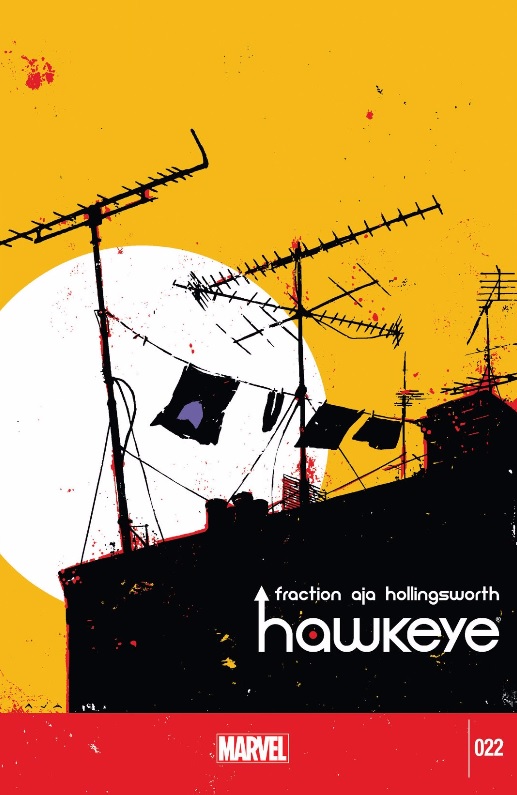 The final instalment of Fraction and Aja’s redefining run on “Hawkeye” manages to bring everything full circle. It may have begun and ended in Bed-Stuy, but in between it took us on one hell of a ride. 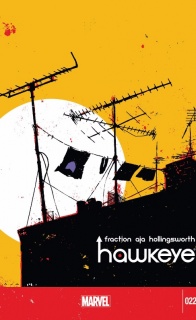 Hawkeyes Vs. Tracksuits. Final Round!

There are few books currently running that could claim to have had the reach of Fraction and Aja’s “Hawkeye”. Initially gaining some traction because of the unexpected fan reaction to Jeremy Renner’s portrayal of the character in 2012’s Avengers Assemble, Aja’s updated, stripped-down redesign, along with Fraction’s humanising scripting quickly garnered the book a level of independent success that surprised even the most ardent Hawk-guys and girls. After an unprecedented run of almost three years, give or take some postponements, the mainstream indie book that has carved a target-shaped notch for itself in the comic-book cultural consciousness has been handed over to a new team. But, while Jeff Lemire and Ramon Perez are three issues into their own ‘All-New’ iteration of the avenging archer, we’ve still got one final issue of Brooklyn-based destruction to unpack.

Fraction has barely missed a beat for this entire 22 issue run. His narratives have been tightly woven, deeply personal affairs, and he’s managed to tell a distinctly consequential story in a world which sometimes feels like it resets more often than a Saturday morning cartoon. The previous two issues have both been partial homages to classic Western films like Rio Bravo, in which, to quote Fraction “a cadre of good guys is hold up in a building fighting against a bunch of bad guys.” This last issue is essentially the third act of that concept, uniting both Hawkeyes again for the first time in a good few issues, and cramming just about every bad guy, ally, and animal that we’ve met throughout the story into Clint’s building for a series of incredibly tense stand-offs and stunning set-pieces.

As this series has been coming to an end there’s been a well-crafted sense of grittiness that has undercut the quip-heavy, comedic tone that it started out with. Fraction’s Hawkeye has evolved from a perennial obligation dodger and outsider to become a man who relies upon people, and upon whom lots more people rely. Or, perhaps, he’s always been that guy and it’s just taken him 22 issues to realise it. There’s a particularly satisfying stand-off between Penny, Ivan, Kazi (The Clown), Kate, Clint, and Lucky, that manages to illustrate Clint’s growth in a few short panels of focussed, caring dialogue. Fraction has carefully crafted a run that reads both as one man’s journey of self-discovery and as an ensemble piece about the importance of community and family; both the one you’re born into and the ones you construct for yourself.

And Fraction wouldn’t have been able to tell this story uniquely human story without the beautifully understated art of David Aja. Aja’s reservation and realism has lent this book a hefty, believable weight since the first issue, and in the last he truly outdoes himself. In keeping with the Western feeling of this mini-arc, Aja has packed “Hawkeye” #22 with his iconic close-up panels. These furtive glances and micro-expressions perfectly complement Fraction’s terse, sparse dialogue, building anticipation for the inevitable action like Aja is channelling the ghost of Sergio Leone.

And that action, when it comes, is brutally satisfying in a way that ‘superhero’ comics so rarely manage to achieve. Aja’s execution of the claustrophobic corridors and backrooms of Clint’s building allow for some incredibly meaty close-combat situations. There’s a humanising level of reservation to his fighting – Clint’s not Thor or Cap, he can’t take innumerable punches and keep on going – that adds a real level of tangible fear to the violence. Each punch that lands feels real and, most importantly, consequential; demonstrating itself in later panels as a visible injury or obvious handicap. What’s more, Aja’s pacing in this issue shows he has complete control of the book. Select sections of decompression, balanced against larger panels that crackle with movement and energy, allow him to draw focus one panel and then race through the next with a truly professional understanding of the medium.

It’s worth noting, however, that Aja’s influence on the book is never more obvious than in the final few pages. As the heroes emerge victorious and start to take stock of their situation, Aja’s crisp facial expressions and dramatic-without-being-melodramatic reactions allow Fraction to round up the effect that Clint and Kate’s journey has had on their relationships and the relationships of the inhabitants of their building in a way that truly cements this book as a complete, standalone work of art.

This run has been a masterclass in telling a solo story in a larger universe. Fraction and Aja were able to create a mythos all of their own, with nuanced themes and motifs that recurred throughout the series, gaining prominence and importance as they went along. What’s more, while it offered numerous nods to the Marvel universe at large, “Hawkeye” never lost track of its own salt-of-the-earth, familial crime drama roots. This is a superhero story done absolutely right: action, adventure, drama, intrigue, and with a truly human heart at its core.

Final Verdict: 9.5 – It doesn’t get much better than this. A solid send-off to one of the best runs I’ve read in recent years.