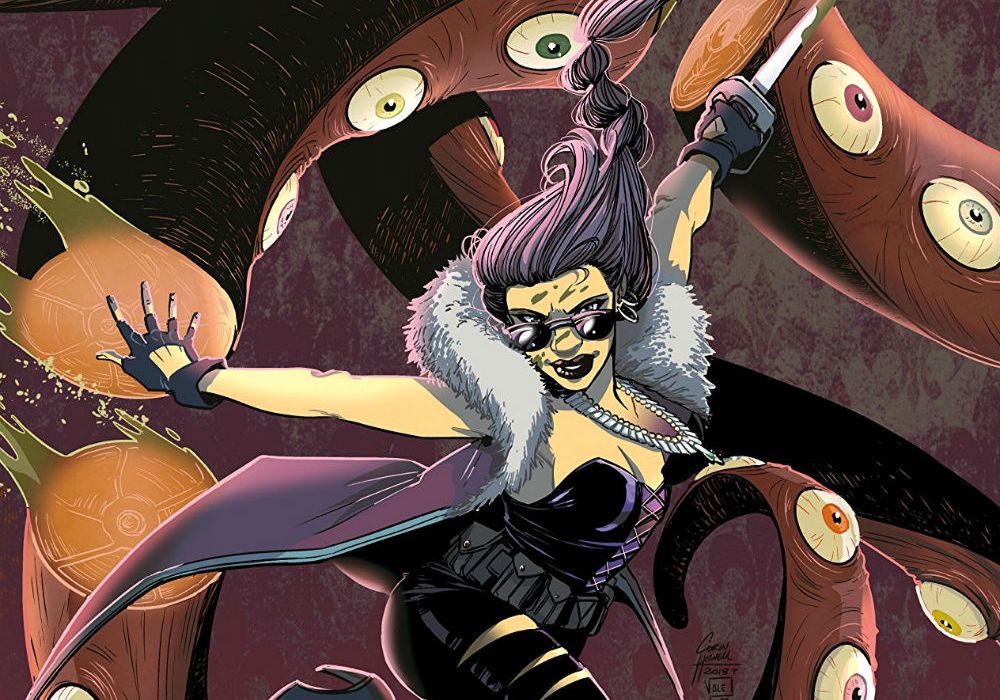 The bounty/monster hunter genre has been having a bit of resurgence as of late. From “Motherlands” to “Doctor Aphra” to “Crowded,” you can’t shake a stick without coming across a variation on one of these narratives. Where does that leave “Calamity Kate?” The new kid on the block trying too hard? The well-polished successor to the genre? Or is it something that takes those notions and slashes it in half with a snarl, a scream, and well suppressed grief?

If it were up to Kate, I’ve got a feeling it’d be the latter. 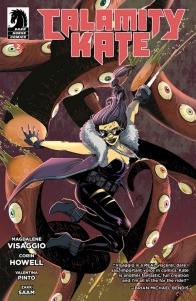 From the Eisner and GLAAD Media Award-nominated writer of the breakout hit Kim & Kim and DC Comics’ Eternity Girl with Gerard Way and artist on IDW’s Ghostbusters and X-Files comes this modern day adventure of heroes and monsters.

After the mysterious Javelin starts sniping Kate’s monster kills, Kate can’t seem to get her out of her head. As the one-sided rivalry continues, Kate can’t help but feel that there’s some connection between Javelin and her ex-wife Sandra, which is throwing her whole process into chaos.

Going into its second issue, “Calamity Kate” had set up a fairly simple premise — the world is filled with monsters, Kate hunts those monsters, there’s another monster hunter and she’s a total jerk, and Kate is the absolute worst. Here, those tenants are reinforced, with the notable exception of the other monster hunter’s personality. We glimpse, in her brief interactions with Kate, that maybe she’s not the kill-stealing, camera loving rival that Kate makes her out to be. . .well, that’s not ALL she is, at least.

She cares, she tries to help Kate up, and the persona of “best monster hunter in the world” seems about as put on as it is on Kate. It’s a front to show the world, but beneath that is something more human, more real. By doing this, Visaggio complicates the narrative and provides a perspective we don’t get to see oftentimes in protagonists of this style of story. Kate is the person you normally root against. She’s callous towards others and completely oblivious to her imposition upon her friend, taking advantage of her hospitality.

It’s a toxic friendship that Kate doesn’t even seem to be aware of. She thinks everything is hunky dory, stuck in her own mind with her own worries. Why? Well, this issue begins to bring that into relief. We know from issue one she’d recently gone through a divorce and now it seems that we’ve met the one who left, albeit in spectral hallucination form.

And yet, Kate is the perfect protagonist for the story the creative team has set out to tell. The driving force is not “Kate wants to be the best in the world” or “the seven great beasts need defeating,” it’s “Kate uses monster hunting as a coping mechanism and has thrown all her self-worth into being the best.” She is broken and angry at the world, but mostly at herself, and that is something we can empathize with and see ourselves in. Plus, this issue features some magnificent violence that manages to feel unsettling and cartoony all at the same time.

That said, “Calamity Kate” #2 spends, perhaps, too much of its time on fights and re-showing what we already learned from issue #1. Kate’s personal arc is furthered a little here but the actual hunt doesn’t move forwards. It feels like those sections are on autopilot, there to reinforce the past and, in a monthly book, that is valuable real estate that could have been used for other things. It doesn’t mean those pages weren’t fun to read though.

Howell imbues the comic with a barely contained rage and a punk/metal soundtrack strumming away in the background, helped along by Saam’s soft but solid lettering & jagged, intense sound effects. Any time a character pulls out a sword or drives through a pile of goblins, you can’t help but pump you fist. The air of cool surrounds Kate through the large and small moments, like her casually cleaning blood of her side mirror or the glee in her face when confronted by a Goblin King. Howell’s got a wonderful control of tone, even if at times the characters have faces that lose detail in the distance, turning into caricatures that are funnier than they should be.

I’m also not as sold on the color palette. It fits the world, with monsters being a sickly olive greens and Kate & Javelin’s coloring standing out against the realistically dim city environments but there are plenty of panels where the colored backgrounds give the comic a dingy look. Otherwise, the coloring does a good job of selling the grotesqueries of the monsters and the contrast between the idyllic life that Kate is slowly mucking up and the dirty, dingy monster filled city, where Kate runs off to, unable to see that it is slowly poisoning her.

There is a lot to love about “Calamity Kate” and the whole creative team has injected a consistent, high-octane tone into the series. The emotional beats hit in the ways they should while the action is fun and gross in all the right ways, masking the true heart of the comic in much the same way as Kate. It’s clear the team has a solid grasp on what they want to do and how they want to do it. And, just like Kate, they will stumble and fall trying to get started, sometimes missing the mark. But then they get right back up and keep on pushing forwards, consequences be damned.

Final Score: 6.8 – A solid second issue that complicates Kate, showing that despite the frustration she engenders, she is the perfect protagonist and the right, complex character to follow. If only the issue had used its space a bit more economically.