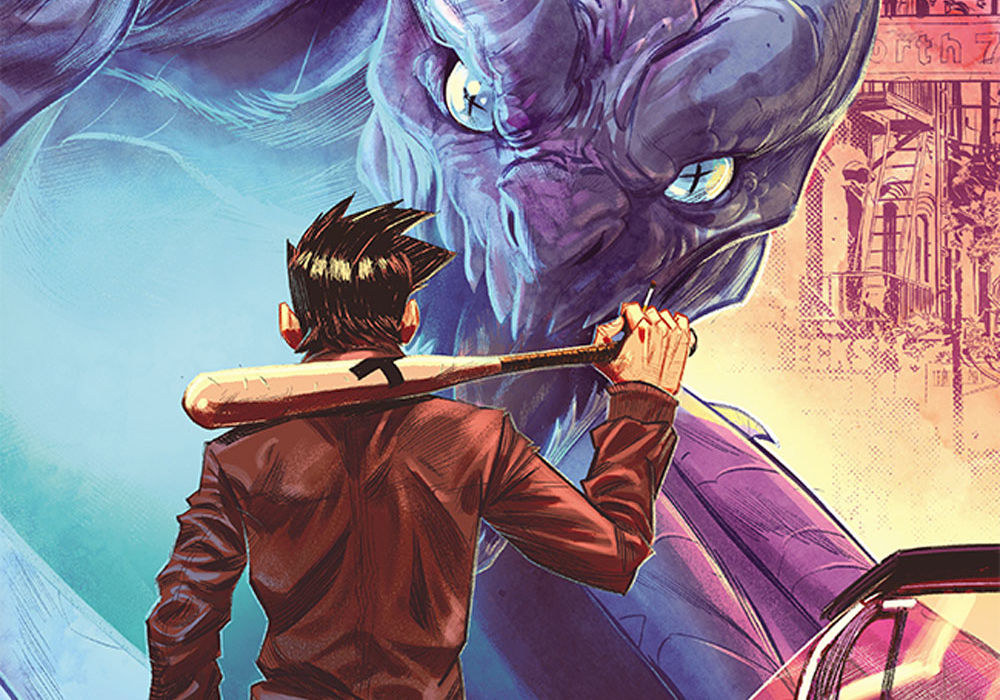 What “Campisi: The Dragon Incident” #1 lacks in ziti, it makes up for in fiery flying death lizards. Sonny Campisi is the local fixer in Green Village, a stand-in for the platonic ideal of thy mythologized Italian American mob neighborhood. He spends his time checking in on the elderly, scaring off competing gangs, dropping words of wisdom on the neighborhood teens, and fretting about the rib cook off (it’s two days away!). It’s a quotidian life out of a Goodfellas montage, except a friggin’ dragon pops up half way through the story, turning things topsy turvy. “Campisi: The Dragon Incident” #1 generally works, and there’s a lot of charm in here despite–or perhaps because of–it’s wonky concept. 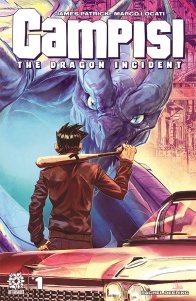 Sonny Campisi is a small-time fixer for the mob-controlled neighborhood of Green Village. If you don’t pay your gambling debt, he’ll come and collect. If you get a little rough with one of “the girls,” he gets a little rough with you. But when a dragon flies into town and Sonny is the one who’s tasked with getting rid of it, it’s a problem unlike any he’s ever faced, and a chain of events begins that will affect everyone who lives in that neighborhood. Especially Sonny.

There’s a lot to talk about in “Campisi: The Dragon Incident” #1, but let’s start with the lore of this thing. Namely, what’s up with the juxtaposition of dragons–high fantasy–with the urban, contemporary crime schtick that’s going on in the rest of the comic? We get a little bit of a lore dump at the end of the comic, and learn that dragons have always coexisted with humans, and their intertwined history generally reflects that of indigenous people’s struggles. Specifically, humans expanded their land ownership, pushed dragons further and further away, broke promises, and monopolized resources for themselves.

The fact that dragons existing (and krakens, and perhaps other mythical beasts) in the world of “Campisi” inspires mild awe in its denizens is actually kind of fun. This feels like peak magical realism, in which things are relatively normal save for a few shimmers of mystic entities and oddities. Dragons being understood mostly as a nuisance leads to some funny moments, and a lot of the comedy in “Campisi: The Dragon Incident” #1 hinges on the absurdity that the guy’s late on his nickel and dime mob payments is more of a threat than the fire breathing hell lizard that just flew into town. Of course things don’t stay that way, but the fact that drama over the annual rib cook off is more pressing than the dragon makes for great worldbuilding and, honestly, a compelling story.

Things kick off when the dragon makes a stand and demands an ancient blood debt be paid, because of course. While the presence of dragons certainly gets downplayed in the first three quarters of “Campisi: The Dragon Incident” #1, the way they’re depicted is 100% awesome. Locati does a good job rendering the beasts, and the dragons in this story are imposing, sleek, and regal. Locati serves us a lot of dragon eye closeups too, which are especially fierce. He also plays a lot with light and shadow, which leads to come intense shots and well blocked panel sequences. Rachel Deering also deserves a letting shoutout here. The words in “Campisi: The Dragon Incident” #1 have a slight tilt to them, which gives the whole thing a slight swagger that’s befitting its characters. However, when the dragon finally speaks, we got more full-bodied, fantasy-tinged lettering. This style really brings the dragon to life and further the juxtaposition that’s central to the story.

The art in “Campisi: The Dragon Incident” #1 is pretty sleek throughout. Locati’s illustrations are stellar across the board. Character expressions are clear, with a particular highlight being a conversation between Sonny Campisi and the a pair of neighborhood teens. While Locati’s style is mostly realist, there are moments of tasteful abstraction or minimalist design that give the story a sense of space that’s really pleasant.

The colors in “Campisi: The Dragon Incident” #1 are moody, an there’s an emphasis and twilight blues and heady, summer reds. While the colors are certainly evocative, their saturation levels and consistent presence can feel monotonous at times. Sometimes, the colors in “Campisi: The Dragon Incident” #1 feel oppressive and overpowering for the narrative. It never derails the story, but we would have appreciated some more color diversity. Hopefully further installments expand not just the story but the color palette as well.

Finally, the titular Sonny Campisi feels a little overwritten. We’re sure his personality will expand in further issues, but in the first issue of “Campisi: The Dragon Incident” it felt as if there were a few too many scenes that telegraphed his vibe of “hardass with a heart” that could have been accomplished with one or two fewer exposition scenes. As it stands now, there was almost a little too much worldbuilding in the first issue that got in the way of plot development.

Regardless, “Campisi: The Dragon Incident” has such an intriguing conceit with solid writing and art that we’re committed to seeing what happens next. We’re not sure if it will go in a more fantasy or mafia direction, but that’s part of the magic — there are so many directions this story could take.

Final Verdict: 7.8. Someone dropped a dragon into the middle of this small-town mob story and honestly, it works.