As its first issue seemingly cut the ties to its 90’s roots almost entirely, it’s time to have a look and see if “Lobo” is going to be able to grow its own way after all. 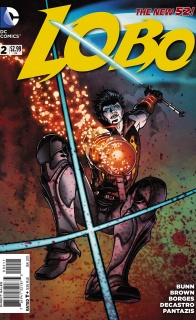 Against his better judgment, Lobo defends the Earth against alien attackers! Plus, learn more about Lobo’s mysterious past!

If there’s one thing I love its comics set in space. And if there’s another thing I love (what can I say? I’m a big-hearted guy) it’s a good old fashioned caper. So when information started dropping earlier this year off the back of the re-invented Lobo’s appearance in DC’s villains’ month, I was tentatively excited.

But I have to say, I never really knew that much about the Lobo that once was. He’s always seemed to me like the very essence of the late 80’s-early 90’s in comics, so much leather, so many extra pouches, and guns so big that they make your dad’s spontaneous red Ferrari seem subtle, so Brown’s more streamlined revamping of the character was definitely something I could get on board with.

The first issue, however, as discussed by our own Brian Salvatore, did suffer from a slightly jarring lack of symmetry with regards to lining up what fans might have expected from a Lobo re-launch to what they actually got. And what they got was the standard ‘charismatic anti-hero with a specific set of skills and a moral code that helps him justify the trail of bodies that he’s left behind’ trope. It was entertaining enough, but there was nothing in the first issue that truly cemented Lobo as anything other than a standard devil-may-care cool guy and, if there’s one archetype that comic-books have seen enough of it’s definitely this one.

But Bunn’s recent run on “Magneto” had piqued my interested, and there are a lot of parallels to be drawn between his work on Marvel’s foremost political zealot and in this latest issue of “Lobo”. Both characters are loners, questionable heroes with a mystery to solve and a veritable sea of less-than-wholesome foes to wade through if they want answers. “Magneto” proved that Bunn has the ability to keep an audience interested in a single character through sparse thought boxes and sporadic moments of hyperviolence.

“Lobo” #2 has both of these in spades, but combines them with a sense of levity that could have pushed Lobo’s character in some more interesting directions. As it stands, however, it still plays a little too by-the-numbers to be fully enthralling. Lobo, a characteristic lone wolf, is teamed with a posse of human mercs to facilitate his continuing attack on the targets he’s been contracted to take out. Lobo doesn’t like the idea of working with ‘Earthers,’ but gives in without much of an argument, and, really, that’s about the extent of the conflict we see in this issue. Lobo manages to dispatch two of the supposedly unkillable killers on his list with relative ease, but the lack of any real danger for our protagonist really only serves to undermine the reputation of his opponents, instead of bolstering our belief in Lobo’s skills.

In fairness to Brown, his work on this issue is crisp and dynamic, excelling during the fight scenes that see his incarnation of Lobo contorting and cavorting with confidence and panache. Brown’s previous work on multiple “Deadpool” issues is very visible in his recreation of Lobo and, when our titular hero is wielding his sword there’s almost no difference in their physicality at all.

The flashbacks, when they come, have an early 2000’s feel to them that actually makes them feel as though they took place not only in Lobo’s recent past, but our own. Both Brown and Bunn have captured the dualism required for a character spiralling from a military-minded noble to a warrior-for-hire, but the story beats are ones that we’ve seen played out time and time again.

And I think that may be the ultimate problem with DC’s latest villainous reinvention: He simply doesn’t know who or what he is yet. The original Lobo was an out and out psychopath with a love of senseless violence – at one point he even murdered every member of his own race simply for the fun of it – but, in the attempt to make this character more relatable, more likeable, he’s been declawed to the point that he lost any sense of originality.

DC has plenty of lovable rogues in their arsenal, even their fair share who aren’t averse to serious wet-work, but there are really few characters in either of the big two that are as murderously manic as the Lobo that was. Bunn’s proved he could add a sense of humanity to a criminal who started off decidedly one-dimensionally, and netting Brown for the project could’ve meant that the outrageously OTT destruction that he brought to the page in his “Deadpool” days could’ve made its way to DC’s roster. But, after all the streamlining and updating, the Lobo that they’ve finally delivered just feels a little too forgettable to make it worth adding to your pull list.

It’s understandable that, in a world of Lokis and Bucky Barneses, DC might be looking to offer up more sympathetic variants of their iconic villains. It seems, however, that in the rush to recreate a character for a new generation they might have ended up losing the traits that made Lobo interesting in the first place.

Final verdict. 5.7 – A passable enough read from a competent team of creators. Still, its lack of character leaves me pining for some uproarious 90’s carnage.