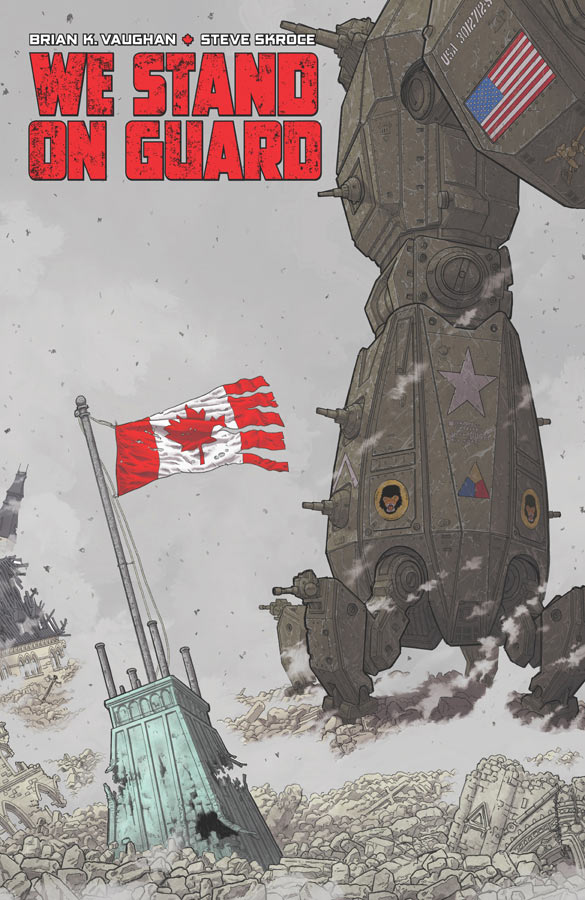 It’s a battle that’s been coming for a long time. Two titans fighting each other for control over the free world. That’s right, Canada and the United States are finally throwing down thanks to Brian K. Vaughan and Steve Skroce. “We Stand On Guard” #1 does what a debut should do, but leaves you asking a lot of questions. Read on for our review but be warned, there are some mild spoilers. 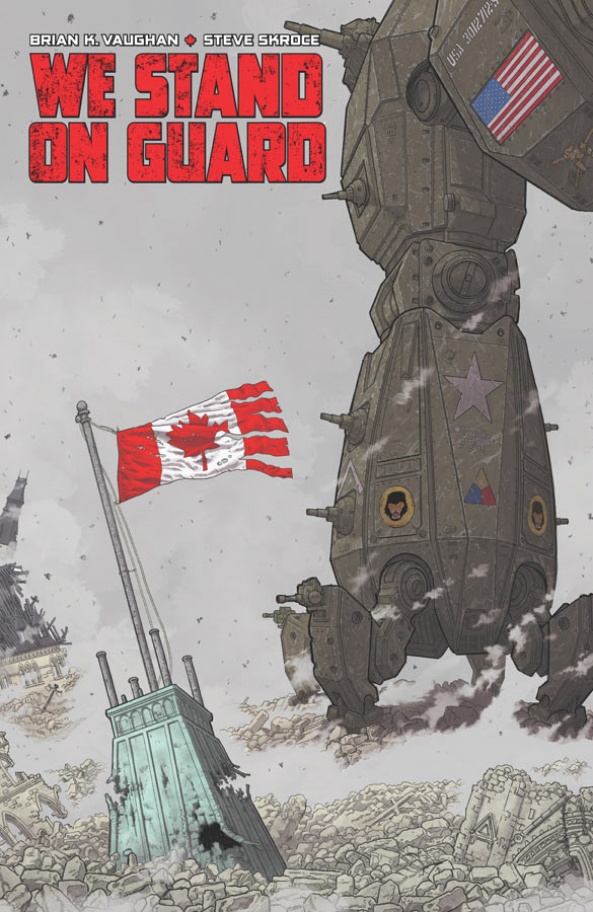 Written by Brian K. Vaughan
Illustrated Steve Skroce
SAGA writer BRIAN K. VAUGHAN teams with artistic legend and MATRIX storyboard artist STEVE SKROCE for an action-packed military thriller that will have everyone talking. 100 years from now, a heroic band of Canadian civilians must defend their homeland from invasion…by the United States of America! The hyper-detailed combat between badass freedom fighters and giant f***ing robots begins with a spectacular 40-PAGE FIRST ISSUE for the regular price of just $2.99!

Brian K. Vaughan is my favorite comic writer ever. When I started reading comics, I was stuck with whatever my local library had. I was in high school, so I obviously didn’t have money of my own. When I got my first part time job, Vaughn’s work was some of the first stuff I bought and I credit “Y: The Last Man” with showing me how amazing comics could be. Yeah, yeah, I’m a “kid”. “We Stand On Guard” is his latest series and it’s definitely one of his most interesting concepts. With Steve Skroce on art, there’s a lot of potential here but as far as it going the distance, I’m not so sure about that.

“We Stand on Guard” #1 begins with a normal family in Ottawa, Ontario, Canada watching the news. In the year 2112, tensions between the United States and Canada are at an all time high and this family is watching a news report when the United States bombs their city. Amber and Tommy, the youngest members of this family, are forced to go on the run and survive on their own. We then jump to the future and Amber is living in the wilderness after her brother has been taken by American forces. While hunting, she’s ambushed by what looks like a cross between a tank and a drone and is saved by a group of Canadian freedom fighters called The Two-Four. She quickly joins up with them after a second attack happens.

The concept of “We Stand on Guard” is undoubtedly cool. Canada and the United States are associated closely together in a logistical way as neighbors and in trade regulations. To put the two against each other, with the United States coming off as the villains, is a interesting idea to explore. That’s not the issue here. The biggest problem is the set-up. Amber is the protagonist, and we see everything from the attack to meeting The Two-Four from her perspective but I don’t feel like we get to know her well enough at all. She feels sort of hollow in comparison to The Two-Four, who get a lot of introduction through dialogue. We get a lot about their personalities, where they come from, and what their role in this group is. She pretty much feels like a spectator until the last page, where we get a little taste of how much she wants to survive this. The need to make us care about this group is important but Amber is far more important to the story because of how it’s set up and I left this issue forgetting about her.

Vaughan is typically very good at balancing multiple storylines, but I felt like with this 40 page issue more could have been given to us. Obviously at the first issue, it’s unreasonable to expect everything be given to us, but the world building felt kind of weak. We get this very specific area and we don’t learn much about the politics or how Canada is faring after the United States’ attack. It all feels sort of incomplete and that leads me to wonder about longevity. Since this story feels super self contained, it ends up feeling like a story that could be told over a six issue miniseries, and not a “Saga” level or even “Y: The Last Man” level ongoing series. I could be totally wrong about this – and I probably am – but that doesn’t change how this first issue comes off. The series is set in Canada and I appreciate the use of French, but one character only speaks French and it’s not really simple French. It’s full sentences with words that not everyone can recognize. I got the general jist of what he was saying but I don’t think it’s safe to assume an American reader will follow it.

Steve Skroce is a great artist who has done a lot of comic work and worked on creating storyboards for The Matrix movies. He’s also Canadian which is obviously kind of fun given the concept of the book. His work here is the best part of this issue, and on it’s own makes the issue worth buying. From the very beginning, Skroce makes you feel all the action happening. You feel implanted in the first air strike as Amber’s face gets cold when she watches her father burn to death. Her horror, in contrast to her brother Tommy’s, is done fantastically, as their reactions couldn’t be any different. A cold expression like that could come off like a bad CGI film but you can see the light leave her eyes as she grows up very quickly. We get the same expression when we see her again in the wilderness, older and strapped with a serious gun. The amount of movement during the hunting scene is really great, and it only gets better as the issue goes on and the action gets bigger.

The explosions and gun fights feel cinematic because Skroce goes big and loud. The angles are great throughout. There are moments where you really feel like you’re seeing the story through Amber’s eyes, such as when she sees The Two-Four for the first time. The clothing is really notable because despite taking place in the far future, the clothing is fairly modern but there’s something militaristic about it. Skroce details all the buttons, zippers and combined with the very well done facial expressions, it makes these characters feel more real. Matt Hollingsworth’s colors are vital to this story. He uses a perfect blend of reds and oranges for explosions. He’s able to make the characters pop in the vast white snow without making them stick out like sore thumbs from a military campaign standpoint.

“We Stand On Guard” #1 has problems but these are things that can easily be fixed in future issues. Brian K. Vaughan is one of the greatest writers in comics and I have no doubt that this won’t shape up to be something very entertaining. If this were a less capable writer, I probably wouldn’t be as convinced. This is a 40 page issue for only $2.99 so this is a great value compared to pretty much everything else. It’s not a complete disaster and for that price, it is worth checking out even for Skroce’s art alone.

Final Verdict: 7.0 – This is a cool premise and I have faith it’ll get better but that doesn’t change that this is a rocky start.