With the ghost of “Secret Empire” still looming large over him, can Mark Waid and Chris Samnee drag Steve Rogers back from the brink? In an effort to move the character forward, it seems like the best approach is to take a step back. Read on for our review of “Captain America” #695, which contains some spoilers. 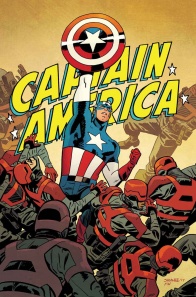 HOME OF THE BRAVE Part 1 HOME OF THE BRAVE begins – and Steve Rogers is back in action in the red-white-and-blue! Steve begins a journey across America to restore his tarnished reputation – and the dangers he encounters along the way are unlike any he’s faced before! PLUS: Includes 3 bonus MARVEL PRIMER PAGES!

When you have such a character-altering storyline as “Secret Empire,” especially one as divisive and potentially irreversible as that event was, you don’t envy the team that has to pick up the pieces. It makes sense, then, Marvel would hand the reigns over to the impressive creative team of Mark Waid and Chris Samnee, who’ve spun gold on both “Daredevil” and “Black Widow,” in order to return Captain America to his former glory. Even with their track record, though, they have a tough job ahead of them, and if “Captain America” #695 is any indication, they’ve chosen to play it safe.

In their previous collaborations, Waid and Samnee established a strong formula of stripping the respective characters back to their core and building them back up from there. Unlike Matt Murdock or Natasha Romanov, however, Steve Rogers has always been a bit more ill defined. Cap’s personality is usually built upon the ideals he represents. Oftentimes, however, writers choose to build Cap as a reflection of the current climate of America, with Rogers becoming a stand-in for their own political beliefs. “Secret Empire” scribe Nick Spencer struggled (and arguably failed) with this concept, leading to the beliefs overwhelming the character in that event, and leaving Steve in a place where many believe he cannot be redeemed (despite an eye-rolling last minute switcheroo). Waid and Samnee had two choices then: they could either lean in hard on the consequences and repercussions of Steve Rogers being a nazi for a few months (one who physically, emotionally and structurally altered the world in ways that cannot be easily walked back – but that’s an argument for another time), or they could push the character forward and pretend like nothing’s ever happened. Perhaps wisely (for the new readers, as well as the old ones who’d prefer to put the whole sorry business behind them), they’ve chosen to opt largely for the latter.

Despite the fact that, for the most part, this issue strives to ignore the immediate past, “Captain America” #695 relies heavily on nostalgia for the Good Old Days in order to reclaim the titular hero from the precipice (or should that be Vanishing Point?) he was teetering on. Steve takes a trip back to Burlington, Nebraska, a town that he saved from the clutches of extremists calling themselves The Rampart when he was first starting out, a favor the town returned by renaming their home Captain America to honor their hero. They also honor his legacy by throwing a festival dedicated to him every year, which you’ve got to imagine was fairly awkward when they hosted it under a Hydra regime. The rest of the issue sees Steve interact with the townsfolk and stop an uprising of the new Rampart, all framed around the noble idea that the strong protect the weak, and the impact that simple lesson had on Burlington in the years since it was first imparted upon them.

Samnee predictably produces a gorgeous issue, one that captures that sense of nostalgia that the script is going for. Scenes explode with action as frantic panels open up to full page splashes of Cap in various heroic poses, before calming down to fairground scenes of wholesome Americans celebrating the love of their hero. There’s a moment where a citizen steps up to the stage to tell a story about the time Captain America saved him from a burning building, and Matt Wilson’s colors drench the panels in vibrant red hues as the narrative flashes back to the events he describes. Samnee has a wonderful talent of depicting emotions and facial expressions with ease, to the point that many of the pages could remove the script entirely and the plot would barely suffer. The issue is bookended with thrilling, well paced action sequences that link the past and present in a fun and rewarding way, and Samnee’s layouts are second to none in these moments.

As a standalone adventure, “Captain America” #695 is a fun read that attempts to shine the light of its titular hero through the lens of the people he inspires, and while Waid and Samnee are embodying the spirit of the Marvel: Legacy initiative, one can’t help but feel that the whole approach is fairly safe. This isn’t the first time that Cap has been disillusioned with the country he’s dedicated his life to, and in the past that search to realign his purpose with an ever-changing political and cultural landscape has provided some fascinating reading. Here though, the creative team have opted for a pretty generic tale that could take place at any point in his career. It’s a fine line to tread, and a direct byproduct of the poor hand dealt to them after “Secret Empire,” but you can’t help but feel that some acknowledgment of and repercussions from that event would have added a much-needed edge to this issue.

Final Verdict: 7.5 – A fairly safe issue, soaking every page in nostalgia rather than pushing the character forward, however this is still a solid standalone adventure for a newly returned Cap, and looks gorgeous too.