A post-Remender Sam Wilson swoops back into the real world with a highly charged turn at Cap that mixes politics with powers. 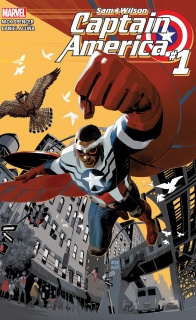 When Steve Rogers was restored to his natural age, he chose one of his closest and most trusted allies to take up his shield. Now Sam Wilson, formerly the Avenger known as Falcon, carries on the fight for liberty and justice as the all-new, all-different Captain America!

Marvel’s new universe is a strange mix of familiar faces and fresh starts. But, even taking into account the amount of ‘All-New, All-Different’ line-ups being announced, few of their changes have garnered more scrutiny than ‘Blacktain America’ (don’t worry Thoressa/Lady Thor/Thorina, I haven’t forgotten about you!) It’s been a fair while both in real time and in the Marvel-verse (eight months have passed in the time between “Secret Wars” and Marvel’s new run of issue #1s) but, compared to Steve Roger’s mammoth run in the star-spangled tights, Sam is still very much a new kid on the block. And he has a lot to prove.

Spencer seems very much aware, perhaps overly so, of the task he’s facing and as such, issue one of “Captain America: Sam Wilson” reads as much like a manifesto as it does a re-introduction. Spencer brings us back to a Sam who is vastly different from the well-connected Caps of old. Disillusioned by the bureaucracy and red-tape of the myriad shadowy agencies that plague the Marvel universe Sam has sworn off all previous allegiances, starting afresh with a grassroots organisation that consists of Misty Knight, Dennis ‘D-Man’ Dunphy, and the support of his local community.

This approach is an interesting one, albeit something that we’ve seen a variation of relatively recently, during Al Ewing’s recent run on “Mighty Avengers” with Luke Cage heading up the team, however the broad brushstrokes of Sam’s newfound need for simplicity came across a little naive to me. While Spencer’s scripting is relatively solid throughout the issue (most notably in the segments between Sam and Misty which feel light, playful and believable), there are some moments between Cap and this issue’s pretty cardboard villains that come off as a little stale and one dimensional. Sam’s decision to unplug himself from politics to focus on real crime seems rather knee-jerk, and the resulting crimes that he turns his attention to are relatively small-fry for a man who is supposed to embody the belief of a whole nation. As I was reading this issue I found myself questioning how sustainable Sam’s position as head of the Avengers is without the backing of S.H.I.E.L.D. or the US government, and how efficiently he could fight crime on a shoe-string budget. If Spencer plans to commit to these difficulties they could both end up being really interesting story points for our fledgling Cap, but it would be very tempting to cast them aside in favour of exotic locations and more interesting villains than lawyers and bureaucrats.

On the other hand, “Captain America: Sam Wilson” definitely finds strength in its artwork. Acuna has been doing strong work for a while at Marvel but his iteration of Sam’s Captain America could be some of his best work to date. While in uniform Acuna’s Cap is dynamic, forceful, and seemingly invulnerable. Acuna’s strong, bold line-work and vibrant colours make Sam’s costume seem like the symbol it’s supposed to be and, although there have been some legitimate questions regarding the amount of exposed skin on Misty Knight’s costume, Acuna does seem to be capturing the ‘super’ side of this book really smoothly. He also brings a humanity and vulnerability to Sam outside of his costume that feels vital to his role as a ‘public’ superhero. From the constant bandages and plasters to the subtle, mask-less facial expressions, Acuna shows a real talent for capturing the duality of the man and the symbol.

I’ve read this issue a few times now and I’m still largely unsure how I feel about it. On the surface I enjoyed it quite a lot; it’s certainly an action-packed romp that reintroduces the audience to a new status quo, my only worry is that Spencer seems to feel the need to touch on every pressure issue in American society today rather than establishing a singular storyline. The resultant 20-something pages feel a little scattered, and they left me pretty unsure what Captain America’s most pressing concern was supposed to be; immigration, gay rights, his political leanings, his public approval rating, or perhaps his imminent bankruptcy. All of these debates and more get a passing look in the first issue, but none of them really end up leading anywhere.

For me, the highlight of this issue was definitely the artwork, and Acuna’s strong, kinetic panels are what will ensure I’ll come back to this book and keep reading it. Whether it’s a cinematic sky-bound dogfight, a quip-laden sparring match or a heartfelt conversation between family he seems to be able to find the right tone and level of busy-ness to keep it compelling. My only worry is that the revisiting of a storyline centred around the question of ‘who/what should Captain America represent?’ isn’t as All-New and All-Different as I was hoping to see in Sam’s first full outing. I fear that this new Caps attempts to disentangle himself from the politics of super-heroing will bring him into more ambiguous bark-offs between himself and other nebulous good guys than it will offer us satisfying stories about him actually doing ‘good’.

Final Verdict: 6.8 – With so much to set up, I’m hoping this slightly turbulent start is the beginning of a smoother flight for the ex-Falcon.