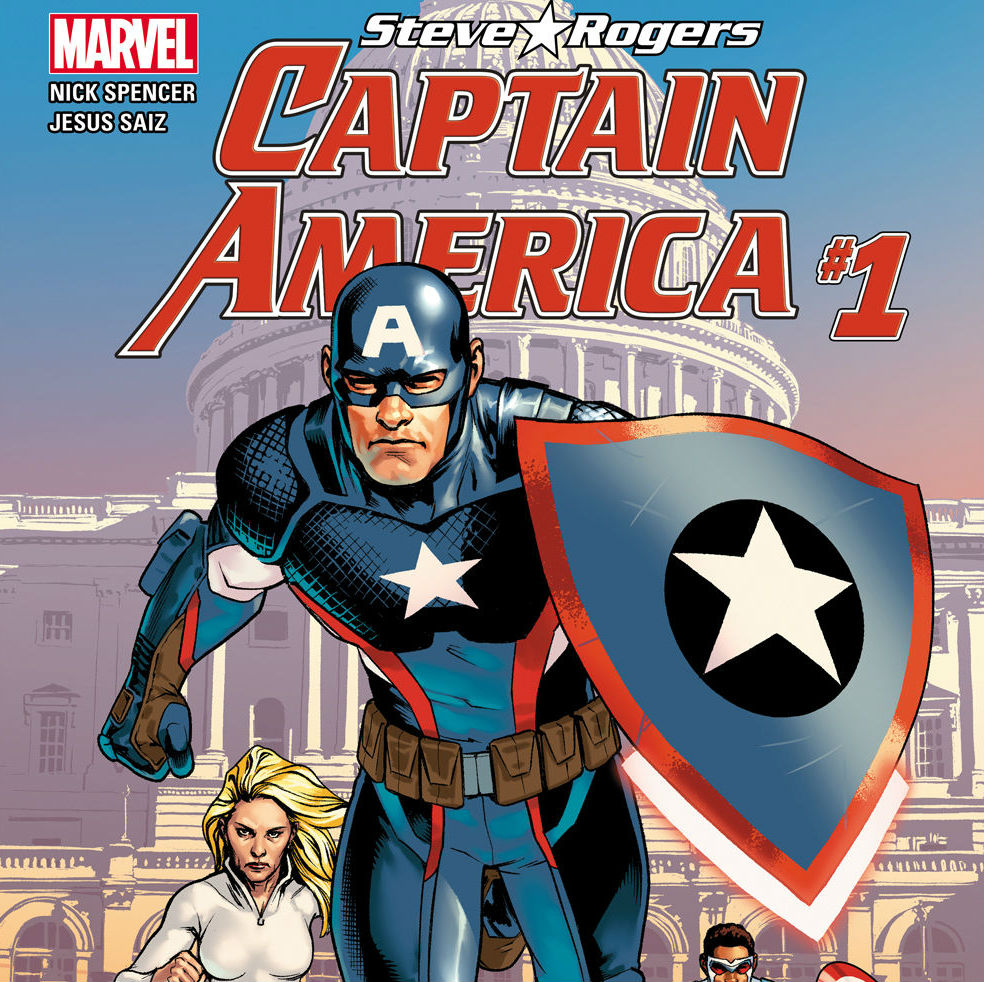 The blond-haired, blue-eyed Sentinel Of Justice is back! Not content with just having one Captain America, Marvel went and de-aged Steve Rogers and has given him a brand new suit and shield and kicked him out into the world to face the evil Hydra once more in “Captain America: Steve Rogers” #1 from Nick Spencer and Jesus Saiz.

Of course, with the controversy surrounding the reveal of this issue, there will be major spoilers beyond this point. If you somehow don’t already know it, turn back now and be forever free of that weight. 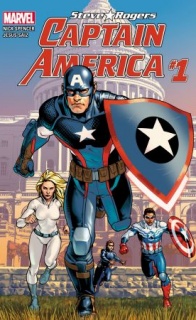 Written by Nick Spencer
Illustrated by Jesus Saiz
He’s back! The original Sentinel of Liberty returns, with a new shield, a new team, and a new mission! And he’s not the only one who’s back! Like the saying goes– cut off one LIMB, two more will take its place! HAIL HYDRA!

Captain America is an inherently political character. He is very literally a character who wears the flag of the United States as his costume and embodies the ideal of the American Dream, whatever that’s supposed to be. It should make sense that Nick Spencer, a writer with a very political streak if you’re familiar with his social media presence, would write the character who is a living embodiment on America, right? Well, for the most part, he is. Then it all falls apart. But I’m getting ahead of myself here.

The story of this issue is that Marvel just had one of its biggest film openings ever with Steve Rogers as the main character and realized, “Shit, the Captain America in the comics is a black guy! We can’t have that!” And so, once again, they have found a reason to revert Steve Rogers back to his Aryan Ubermensch persona. Fret not, though, as Sam Wilson is still Captain America! Look, that’s him right there on the cover! And . . .  nowhere in the rest of the issue.

As you might be able to tell, I’m not the biggest fan of this comic and that’s something that frustrates me because for the majority of it, this isn’t a bad issue. It actually captures a lot of what’s fun about Captain America. You have some great action thanks to artist Jesus Saiz, who is able to render brutal, messy fistfights with that superhero flair thanks to the vibrant colours that make the costumed characters pop right of the page. The digital colouring style makes the artwork feel smooth and sleek and defines the line-work a lot. It’s really a gorgeous comic to look at and the story is structured in a way that the two main action scenes bookend the emotional core of the issue that re-introduces readers to Steve Rogers as Captain America and allows Spencer to begin to dig into Rogers on an emotional level.

Rogers is a character who has been continually reinvented throughout his time in comics and Spencer is clearly aware of that. He gives the character scenes that allow him to express a feeling of uncertainty with his place in the world, which accurately reflects the uncertainty I have for what place this comic has in Marvel’s lineup. Sure, it’s pretty fun superhero action for most of it with a subtle-as-a-brick-to-the-face political slant, but there’s really nothing much else here.

Certainly not enough to justify this being the second Captain America title in Marvel’s publishing line. Other than the controversy surrounding this issue (which I’m getting to, don’t worry) there’s pretty much nothing going on here that couldn’t have been explored in Sam Wilson’s title and no real justification for why Steve Rogers is back as Cap other than for maintaining the status quo. There’s even no real reason why the Hydra resurgence couldn’t have been in Sam Wilson’s book either.

Now, obviously, this is a trick or a diversion or a clone or an LMB or some level of bullshit that will be reversed in the course of the story. Hell, the flashbacks in which we see Steve’s mother recruited by Hydra in the ’40s are coloured exclusively in sepia and graytones, with some flashes of crimson as the single theming colour. Of course this is just a shock tactic to get us talking about the comic, and it unfortunately worked. What’s frustrating is that’s the only trick up this comic’s sleeve. It’s entirely shock factor with nothing substantial. It’s a vapid attempt at making this entire exercise seem worth it by creating a shocking reveal that will get everyone talking. And it did, but only about how transparently awful this reveal is.

What’s most frustrating is that this is the hook for this issue. This is the closing note that’s meant to instil the feeling of “I can’t wait to read the next issue!” in you. And the way in which the comic attempts to drop the mic on that point is undercut by the fact that you’ve already paid $5 to read about a character you, presumably, enjoy reading before having that enjoyment kicked to the dirt in an attempt to be shocking and controversial before telling you to keep dropping your $4 every month to read about your favourite character being an Actual For Real Nazi.

Maybe this is our mirror as a comics community. Maybe this is what Nick Spencer is ultimately trying to say. If Marvel can charge you $5 to tell you why your favourite character is complacent in some of the worst crimes committed in human history and your reaction is “Oh boy I can’t wait to see more of this!” then maybe the comic reading community is in a worse shape than we thought.

Or Marvel is just desperate for some way to stay relevant now that all their best talent has jumped shipped to make better comics at Image.

Final Verdict: 2.5 – “A book whose faults have taken over the entirety of the book, leaving nothing to be desired. There may be a slight glimmer of hope somewhere in it, but it is buried extremely deep under.” Yeah, this seems to fit that description.