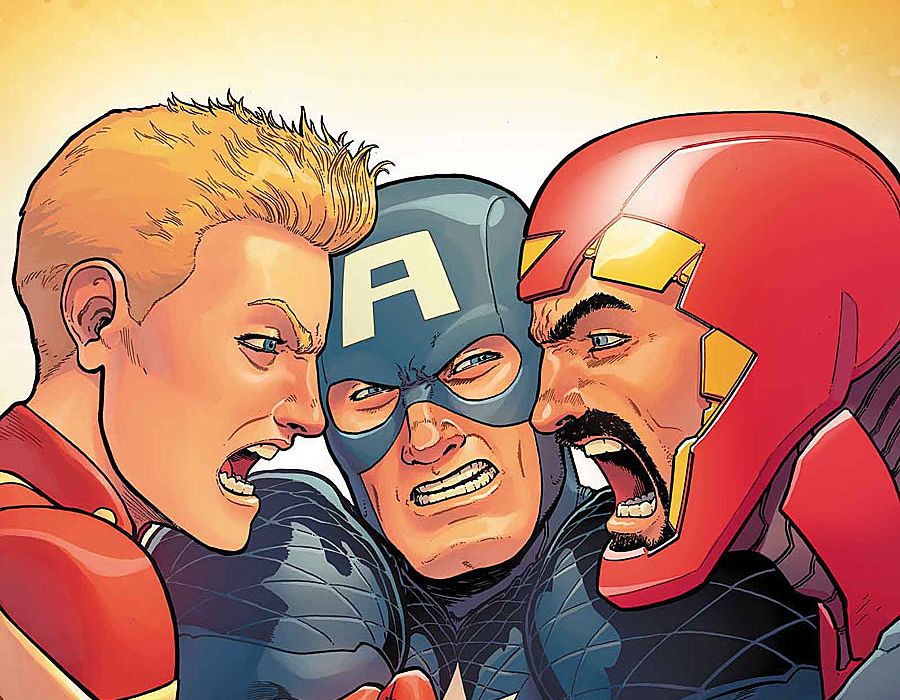 Not too long ago, the collective Internet went into a frenzy when it learned that Captain America was, in fact, a sleeper agent for Hydra. Then, just as suddenly, it stopped when it learned that this was the result of a living Cosmic Cube (named Kobik) altering his past. But the story continues, and Cap is still Hydra, in this month’s issue of “Captain America: Steve Rogers.”

There will be spoilers within. 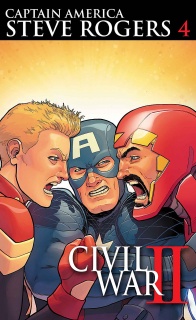 CIVIL WAR II TIE-IN! With war on the horizon, Steve attempts to broker a truce between Iron Man and Captain Marvel.

After reading the description, I had to go back and check several times to make sure that what I read is indeed the same issue as advertised. What’s being marketed as a “Civil War II” tie-in really only amounts to Steve mentioning how the other heroes fighting each other means no one will be around to get in the way of his own plans. In fact, he doesn’t even talk to Iron Man or Captain Marvel, much less attempt to broker a truce.

That said, his own plans are starting to be put into motion, and now that we know more about this all-new all-evil Captain America, we can see just how different he is from the Steve Rogers we all know and love.

This is a Captain America who does not have any morals or sense of righteousness to keep him from crossing any lines, ambushing villains who have something he wants and showing absolutely no mercy. There’s a rather grim scene where he slaughters Red Ghosts’ ape underlings, making nice use of a red background against a black foreground that shadows the splattering of blood, while the star that so proudly stands on Steve’s shield stabs into the gorilla’s chest. (Nonetheless, I have no doubt we’ll be seeing some Harambe jokes coming from this scene.)

The artwork also does a fine job at making Steve look the part. The use of shadows cast about his face and suit shows how the proper lighting can make even the most heroic of figures (or at least what’s supposed to be a heroic figure) look cold and menacing. The expressions Javier Pina gives him do that nicely as well, providing a look of cold contempt we’re used to seeing from supervillains, but not from Captain America.

However, as Cap himself goes further into villainy, so does his dialogue. He begins spouting lines like “I don’t fear any of these self-appointed ‘heroes,’ these supposed protectors of humanity who usually end up being its greatest threat” and “we will see this castle of lies collapse in on itself,” which I’m fairly certain are right out of the handbook of villain cliches.

At the same time, we do learn a little more about this new version of Captain America, and see more about his changed past. The flashback scenes are still nicely done, colored with mostly shades of grey and brown, except for the vibrant reds. There’s more to Steve’s changed past than “Hydra helped him out as a kid, so now he’s dedicated to the cause,” which are starting to take the story in an interesting direction.

In fact, Hydra often has its multiple heads fighting each other for dominance. This may be the same, as Steve Rogers does not agree with the Red Skull’s current recruitment policy of “preaching blind hatred and intolerance.” A little of his true self shining through the brainwashing? Maybe, but then again, who knows just how much Kobik changed his past?

Fortunately, the issue isn’t all just Steve Rogers talking about his plan and showing that he is, indeed, evil. There are a few subplots, including Maria Hill’s continued fallout from the events of “Standoff,” and Sharon Carter’s “S.H.I.E.L.D. Act,” which is not exactly a subtle metaphor for government surveillance and the national paranoia that leads to sacrificing freedom and privacy in exchange for a feeling of safety. (That said, the “Captain America: Winter Soldier” movie already handled that same topic much more skillfully.)

Speaking of the fallout from “Standoff,” we also see a little of Bucky’s Thunderbolts team, and the new Quasar in training. Her time in this issue is rather short, mostly focused on trying to control her powers and the visions that cosmic awareness grants her, which we can add to the list of many possible ways people can find out about Captain America turning bad.

Of course, the easiest way to resolve that would be if Jack Flag were to wake up from his coma (having come down with a bad case of “shoved out a moving plane” in the first issue). It’s an emotional moment for Cap’s supporting players (give or take a somewhat lengthy synopsis of “The Blacklist”). Similar to the flashbacks, t floods the panels with shades of red, providing a sense of impending doom. Yet as Cap alludes, it could be doom for Jack, or for Captain America’s dirty little secret.

Overall, this issue mostly does two things: 1. show us how Captain America operates as a villain, and 2. set up a variety of ways his plans could fall apart. It’s not a typical Captain America comic, because he’s not the typical Captain America now, and while it may be interesting to see a hero turned evil for a time, it can only go on for so long before he falls into the same pitfalls as many a supervillain before.

Final Verdict: 6.7 – A mostly dialogue-heavy issue that still carries the plot, provides more background to Captain America’s Kobik-altered history, and adds a new twist to his Hydra allegiances. Things are progressing, for better or worse, and it contains a few powerful moments, none of which have anything to do with “Civil War II.”