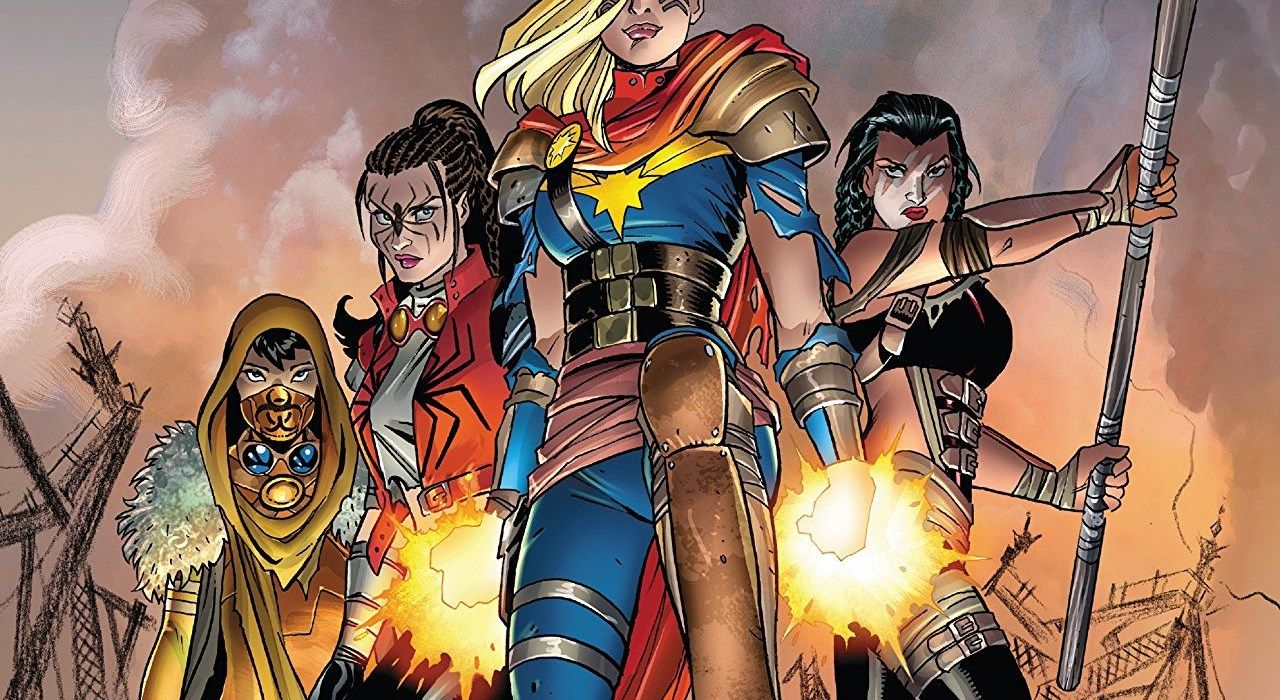 When most Marvel heroes have a new movie coming out, the comic makes sure to showcase the villains and supporting cast from the film. But Carol Danvers don’t play like that! In this issue she battles, and I quote: “Nuclear Man. Formerly Mahkizmo. Once upon a time a Fantastic Four villain, looks like a seven-foot Russian pimp.” The story takes place two months into a mico-apocalypse on New York’s Roosevelt Island. If this is what the Captain Marvel movie is going to be like, I am beyond excited. 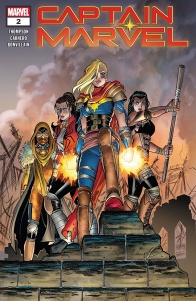 REVOLUTION! The classic Fantastic Four villain MAHKIZMO has taken over Manhattan’s Roosevelt Island and turned it into an apocalyptic wasteland! When CAPTAIN MARVEL ends up trapped there and cut off from the rest of world (including any Avengers-shaped reinforcements!), she’ll need to build her own team out of allies, old and new — SPIDER-WOMAN, HAZMAT, ECHO and a man known only as SOM — in order to start a revolution to free the island’s civilian inhabitants. With that kind of backup, Mahkizmo should be toast — but not everything is what it seems on this island…

I’ve raved before, and I’ll probably do it again, but Kelly Thompson is one of the best writers in Marvel’s bullpen. While there are a lot of talented folks penning books for the House of Ideas, Thompson does one thing better than any of them: pure, unironic, superhero bombast. And that’s what a “Captain Marvel” comic needs. In this issue, Carol is introduced snap-kicking the villain while grinning through a bloody nose. “I said… back off,” is all she has to say. Is it clever? It doesn’t need to be. The words have weight, mostly thanks to the class-50 strength level and the aforementioned face-kicking.

This issue has a lot of business, but most of it is immaterial. A force field surrounds Roosevelt Island, and only women seem to be able to enter it. Though it’s only been a few hours on the outside, it’s been two months on the island. Nuclear Man has an evil fortress and an army of robots. Heroes such as Spider Woman, Hazmat, and Echo are leading a resistance of women.

All of this is delivered with tone-perfect exposition. Superhero comic readers know how these sorts of situations work; there’s no reason the heroes wouldn’t have figured it out. When Carol asks Echo where Nuclear Man is holed up, you can almost hear the frustrated scorn when she has to answer, “he calls it the citadel.” The tone of the whole book matches Carol’s personality- professional, competent, composed, and fed up with the emotional bullies posturing as villains.

It’s not as if superhero comics are considered drab, but Thompson makes sure that her script gives artist Carmen Carnero plenty to do. The women trapped on Roosevelt island were wearing their costumes, but after two months everyone has gotten the Mad Max makeover. On the one hand it’s totally over-the-top. But on the other hand, Carnero pulls it off so well that it’s hard to be mad.

There’s just so much fun being had on all the pages, by every member of the creative team. Recent “Captain Marvel” series have been competent and done by talented people, but this issue has an ephemeral energy to it that’s hard to quantify. You can feel it with every hero pose, and every time a badass lady de-limbs an evil robot. Tamara Bonvillain is on colors, and you can feel her glee and Carol’s when Captain Marvel gets to really let loose and drown the whole page in energy blasts.

That delight is hard to beat, but it does sort of feel at odds with the momentum of the mystery/adventure. “Why is Nuclear Man doing this?” the issue wonders. “Also, how?” There’s no doubt that a giant sexist villain trapping exclusively women on his island is gross, but to what end? How is he repressing the heroes’ powers? Why isn’t it working on Carol? These questions are all interesting, but they aren’t what I’m going to retain going into next month. No, what I’ll remember is how cool Jessica Drew looked blasting that laser gun, and how well Thompson writes heroic patter.

This makes “Captain Marvel” #2 a swift little issue. But if you’ve read any of Thompson’s other ongoings (especially the excellent “West Coast Avengers,” in stores now) you know that she’s got a knack for plotting. The answers to those above questions? They are going to tie into a larger conflict. That journalist trailing Carol around? She got a role left to play. That man, who’s almost definitely trans, and thus confusing Nuclear Man’s sexist machinery? He seems like a great potential new member of Carol’s supporting cast.

So while a lot of this issue feels a little bit like junk food, it’s got surprising value. It’s a fun little installment of superhero storytelling, but no doubt we’ll look back on this chapter as a great introduction to enduring ideas. Of course, that can only happen if this book continues for long enough to pay off, and that only happens if people buy the book. I won’t split hairs here: you absolutely should. Everyone loves to talk about how great Captain Marvel is, and why she’s much an important hero in the Marvel universe. This issue is the reason why. Carol is cool!

Final Verdict: 7.9 – Works well as a superhero adventure, but it’s going to read even better when a lot of these threads start to pay off.