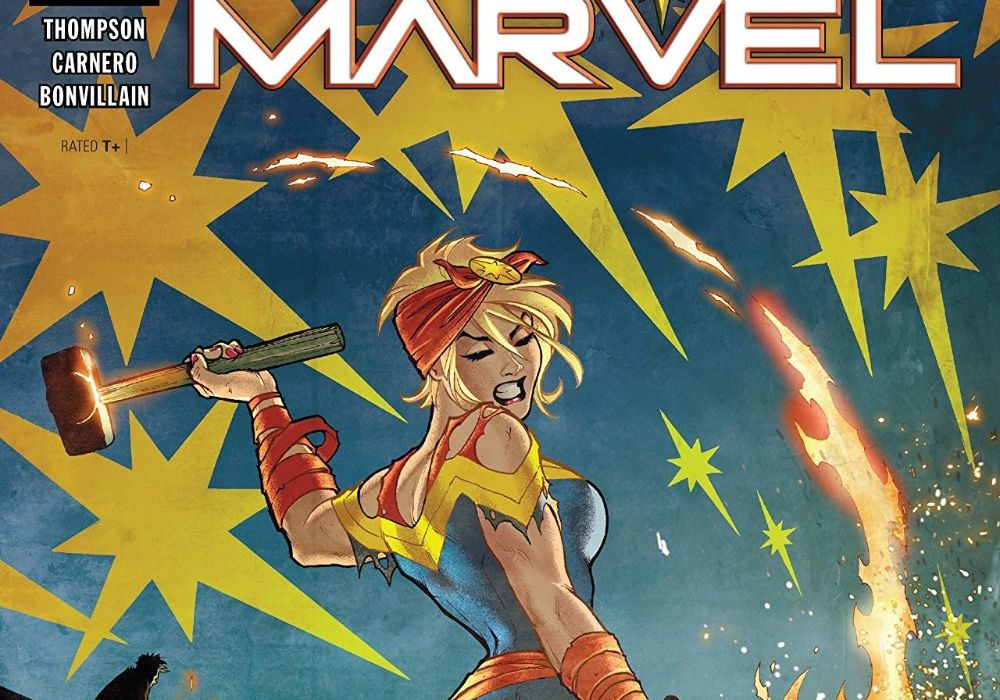 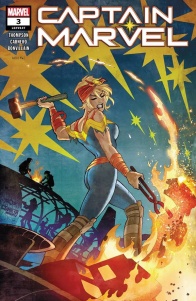 BUILD IT AND THEY WILL COME! SHE-HULK joins CAPTAIN MARVEL in her war on Roosevelt Island! But the barrier continues to cut them off from the rest of the world, while Nuclear Man’s ranks are somehow swelling, and something on the island is interfering with superpowers. If Carol’s going to win this fight, she’ll need an army of friends, a hangar of war machines and an ironclad plan. But can she really trust all her allies? And what face from Carol’s past is about to show up and change everything?

“Captain Marvel” #3 benefits hugely from the absence of its main villain, the misogynistic Nuclear Man. This arc has seen the character trap a large number of female civilians on a sealed-off Roosevelt Island, with Carol and fellow heroes Spider-Woman, Echo, Hazmat, and She-Hulk among them. As you would expect from someone who’s real name is Makhismo, he’s a raging sexist buffoon. As the genuine feminist icon she is shaping up to be, it makes total sense for Captain Marvel to be facing off against such a foe, but the way his abhorrent beliefs were depicted in the first two issues of this series was distractingly overplayed.

His ridiculous dialogue would have been at home in a jokey title like “Unbeatable Squirrel Girl,” but when juxtaposed against the somewhat stern personality of Carol Danvers, it read quite jarringly and detracted from the dramatic elements of this story. Fortunately, he’s nowhere to be seen here, allowing this issue of “Captain Marvel” to focus solely on the title character and the members of her ragtag rebellion. It’s a group for which times are particularly hard. Morale is flagging after weeks in captivity, while Nuclear Man’s technology has left Hazmat and She-Hulk completely depowered, with Spider-Woman and Echo operating at a weakened capacity. As the only one unaffected, it’s going to take all of Carol’s physical strength and strategic cunning to get them out of this mess, but luckily she’s more than happy to oblige.

After a slightly underwhelming start, writer Kelly Thompson really hits a stride with this issue of “Captain Marvel.” It can be difficult writing engaging action for a character of such astronomical power, simply because there’s relatively little that could seriously challenge them. The comparatively action-heavy previous issues of this arc have suffered from this and so does the opening of this third chapter. With a de-hulked Jennifer Walters about to hit the ground after a long fall, the issue begins with what is presumably intended to be a heart-pounding sequence, but it just isn’t. Carol races to catch her friend and although her internal monologue tells us “this is going to be tricky,” there’s nothing in the panels to suggest it was the slightest bit difficult. The phrase “show don’t tell” comes to mind.

But if this opening is eye-roll inducing, the issue narratively redeems itself with solid tension throughout its remaining twenty-or-so pages. Thompson builds a respectful comradery between her core characters as they assess their priorities, most pressing being whether they can trust their mysterious new recruit, Som. While some of the speech bubbles may seem a little too dense on first glance, they actually read remarkably well. The dialogue is sharp, with every interaction pushing things forward with purposeful momentum, ending with an enjoyable final page reveal (albeit one that asks more questions than it answers).

The art and colors provided by Carmen Carnero and Tamra Bonvillain are superb from start to finish. This issue boasts two astonishing double-page splashes, the first being during the aforementioned opening rescue which may not thrill on a narrative level, but undoubtedly looks spectacular. Showing Carol at the heart of a fiery explosion, the spread functions as a fantastic showcase for the character’s sheer power, strongly evoking the might of her recent live-action incarnation. The second is effectively just a training montage, hardly untrodden territory for this genre, but it’s beautifully presented and paired with some of this issue’s best internal monologuing. It plays out like a scene from the best eighties action film never made.

Separated from the action, things remain just as strong. Carnero’s illustrations are expressive and slick, while the Mad Max-esque costume design is an absolute delight – particularly in the case of Spider-Woman who has never looked cooler. Bonvillain’s colors play a crucial part in establishing this aesthetic, with every background seemingly covered in a thin layer of dirt. Together, they endow this setting with a strong sense of identity, making it easy to forget its location in New York City, the stomping ground of many a Marvel hero.

If Thompson’s first arc on “Captain Marvel” stumbled out of the starting blocks, it has certainly course corrected with this third installment. The book benches its cartoonish villain to tell a story of courageous women banding together against difficult odds, doing so with a striking visual style that is to be applauded. The final pages hold an interesting new development, one that should prove especially tantalizing to readers who have followed Carol Danvers for many years. The foundation of another great issue has been laid, but there’s a niggling concern about the inevitable return of the antagonistic Nuclear Man. It’s possible that his presence could see the book lose the subtle characterization and dramatic tension established here. Nonetheless, even if the jury is out about this arc as a cohesive whole, there can be no denying that this issue is a great piece of work.

Final Verdict: 8.0 – “Captain Marvel” #3 continues what has been a triumphant month for Carol Danvers, pushing this arc into exciting new territory.