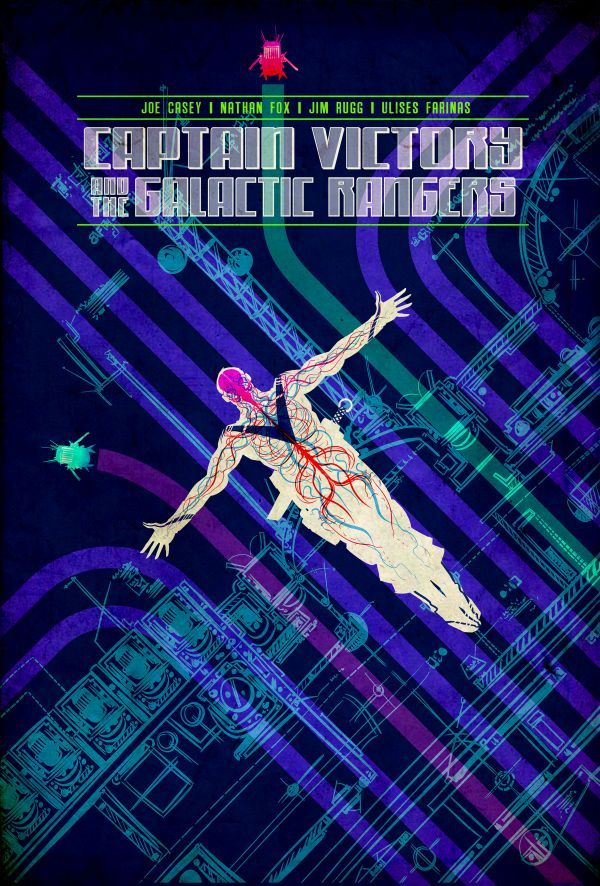 In “Captain Victory and the Galactic Rangers” #1, Joe Casey and the four person art team come together to reopen an exiting sci-fi universe that builds on the work of comic book icon Jack Kirby. 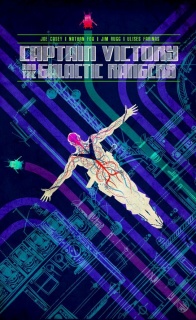 Joe Casey is one of the industry’s most popular writers having written for Marvel and DC, from The Uncanny X-Men to Superman, and many more best-selling titles, and most recently created and writes the acclaimed Sex series from Image Comics! Now he is tackling one of Jack Kirby’s greatest creations, Captain Victory! And this story will Blow! Your! Mind! Out of the hell of a cosmic firefight, Captain Victory is launched into an epic adventure that spans both space and time! All your favorites are here — as well as all-new enemies to face! Your new favorite cosmic comic book has finally arrived!

In the beginning, there was Jack Kirby, the man who drew “Fantastic Four” #1 and gave birth to an entire universe of heroes and villains and superpowers. He co-created everyone from Captain America, the Hulk, Iron Man, Nick Fury, Thor and the X-Men, and set the tone for the next 60 years of storytelling. If you’ve enjoyed a non-Batman superhero movie in the past 10 years, you owe Jack Kirby a debt of gratitude.

Unfortunately, disputes with the business side of the industry forced Kirby away from Marvel, first over to DC where he created Darkseid and the New Gods, before pioneering creator-owned books at Pacific Comics in the 1980’s. Although Jack Kirby sadly passed away 20 years, his legacy and his work lives on, both at Marvel and DC, and now at Dynamite as the publishers relaunches Kirby’s “Captain Victory and the Galactic Rangers.”

If anyone thought that “Captain Victory” would ease the audience into its brand new world, that notion is immediately dispelled when the crazy sci-fi action starts on page one. The space-dreadnaught Tiger, led by Captain Victory, has come under attack from the unseen villain Mekkanos. The battle quickly turns against the Tiger and its crew, and Captain Victory gets caught in a fiery explosion and is burnt to a crisp. The fight isn’t over, however, and First Mate Klavus takes charge of the counter-attack and the frantic attempt to save Captain Victory. His mind has been copied into the ships computer and can be transferred into a cloned body, but the vessel still needs to escape from Mekkanos or everything is doomed.

Joe Casey takes on the formidable task of writing Captain Victory’s new adventure and diving into the Kirbyverse. Casey has written everyone from the X-Men to Superman, but really made a name for himself with experimental work at the now-defunct Wildstorm imprint. Casey has continued to prove his knack for unconventional storytelling at Image with the “Gødland” and “Sex”, and he’s a natural fit for a cosmic space adventure. Casey seems to abide by the immersion theory, meaning that he drops the reader right into the middle of the story and lets them work it out; he does throw out a ton of information, but he peppers in just enough exposition that it’s possible to work out the plot and feel like you’re pretty smart. The opening section includes small biography panels, as if from a government report, that lays out the basic info of the alien crew, and Casey keeps the word count to a minimum while still making them interesting. Mister Mind’s point of origin, for instance, is listed as: Unknown. It’s a small detail, but it already hints at a wider and more mysterious world.

Stepping into the proverbial shoes of a legend like Jack Kirby is a monumental task, to the point where not one, not two, but three artists contribute to the first issue of “Captain Victory”. Nathan Fox handles the first section, and he sets a high bar for series. His art is definitely attention grabbing, and borders into pop art territory. His outlines are dark and thick, while inside the lines is softer and more impressionistic. The opening panels of the battle are drawn in such a way that they spell out FIRE, BOMB, KILL and DEATH, which gives the scene both a pulpy and harrowing feeling. The battle is a chaotic affair, and Fox’s art reflects this by cramming the page with psychedelic explosions and crumbling spaceships.

Next comes a flashback sequence to seventeen years into the past, where a young and impressionable Captain Victory is informed of his clone backups and is unwittingly subjected to a final test of the procedure. This could have potentially been the most exposition filled and boring scene in the issue, but Casey focuses more on how this clone plan affects the Captain on a character level, and not just another plot point to be listed. The actions of the Major bring the moral alignment of the Galactic Rangers in question; if they are so quick to potentially dispose of one of their own, it’s clear that that might not have the noblest of intentions. It’s just a short scene, but effectively proves that the non-fight scenes will have just as fast a pace as the rest.

Jim Rugg pencils the short flashback scene, and he channels classic Kirby with his art: the straight and almost box-y characters, the plethora of geometric shapes that make up the technology filled background; it looks just like Reed Richards lab circa 1962. While many may think of these early comics as having a simpler and more basic look, Rugg proves that the style is still just as effective as the most photo-realistic and gritty books that comes out today.

The final segment is where the blueprint for the rest of the series gets laid out. Two different clone bodies get ejected from the ship and forced through a space-time worm hole. One lands in what appear to be 1970’s New York City, where an adolescent Captain Victory emerges from the pod and promptly passes out from sensory overload in a Times Square straight out of Taxi Driver. The other pod crashes on into a derelict future world, where two alien scavengers stumble upon it just time to see a gargantuan and deformed Captain Victory appear. Casey has set up three different plots going on simultaneously, and he impressively keeps everything coherent.

This is where Ulises Farinas appears as the third artist in the issue. He has a two page spread that provides the reader with a look at how the clone/implantation process must be harrowing for the new bodies. The sequence is almost cartoonish in appearance, and the optimistic and happy appearance is a nice respite from the chaos happening in the rest of the issue. It also endears the reader to the younger Captain Victory; his mind has come from this bright cheery place, only to have Mister Mind intrude and pull him into the world.

A special mention should be made of colorist Brad Simpson, who is the real MVP of the issue. He adapts his palate to suit any artistic style, and creates a unifying feel to the entire book even as three different hands draw the world.

“Captain Victory and the Galactic Rangers” #1 is a hard sci-fi action series that embraces the genre and makes no apologies for that. The tone is pulping and fun, and Joe Casey isn’t afraid to challenge the readers with big ideas and lots of them. Nathan Fox, Jim Rugg, Ulises Farinas and colorist Brad Simpson step up to provide a look that harkens back to classic Kirby, while creating dynamic and action packed sequences that bring the reader into this new universe. “Captain Victory” is off to a strong start, and is a worthy successor to the work of the legendary Jack Kirby.

Final Verdict: 9.5 – An eclectic and exciting introduction to a forgotten world of Kirbyisms