After a slight hiatus Fraction, Ba, Moon, and Chabon are back with a mind-bending maze of a third issue that weaves this latest story thread straight through the heart of the Casanova franchise. 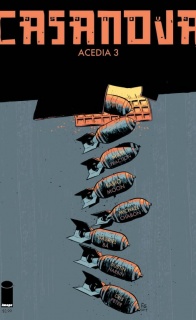 Something is trying to kill Casanova Quinn. Is it his mysterious boss with no memory of his past? The familiar cops from another life? Or something inconceivably evil and just out of sight? (HINT: YES.) With CHABON and BÁ tracking the continuing adventures of T.A.M.I., only available in the physical comic.

“Casanova” has always been a comic with an ambitious reach. From the very first issue Fraction, Ba, and Moon have been attempting to tackle stories with multiversal reaches on multiple fronts and, whether  or not you agree that their psychadelic art stylings and poetic, psuedo-scientific theories hit the mark every time, you’ve got to admire them punching for the stars.

While each successive run has raised the stakes further than the last, “Casanova: Acedia” took a different approach, changing the pace entirely. Fraction switched down a couple hundred gears from high-concept sci-fi romp to tense, simmering neo-noir mystery, and Moon and colourist Cris Peter followed suit, narrowing  their focus (and palette) to a more subdued, shadowy set-up in keeping with the story at hand.

But Fraction, and guest writer Chabon, took pains to keep the more fantastical elements of Casanova’s universe in close reach. While the focal question of “Acedia” has been ‘Who is Casanova Quinn?’ the follow up is definitely ‘and what does he have to do with the end of the world?’. Finally, three issues in, we start to explore the second half of the question.

Issue three feels like the first time we start to explore the second half of that question. The seemingly disparate threads that characterised the first two issues are finally being woven together, but Fraction’s characteristic subtlety is such that most of the characters’ true motivations still feel satisfactorily ambiguous. We also get “Acedia”s first proper glimpse of E.M.P.I.R.E. and it’s clear they’ve lost none of the hyper-prescient control that made them so formidable beforehand. As you might expect from someone who can write both the bombastic prose of “ODY-C” and the quip-heavy dialogue of “Hawkeye”, Fraction has no problem marrying these two styles, and the result is a book that reads as both understated and melodramatic. This melodrama is perfectly represented by the inclusion of the brothers Fabula, a collective of suitably oddly-spoken dimension-hopping assassins who seem to be looking to kill everyone associated with Casanova and Boutique while on the other side of things, Fraction’s inclusion of a few familiar faces in strange new ways comes with so little ceremony that you might miss them all on first readthrough.

Moon’s exaggerated body styles prove perfect in meshing the more down-to-earth noir elements of the narrative with the increasingly fantastical additions. The Fabula’s impossibly large and mobile bodies represent the first real threat to Casanova and crew and Moon’s ability to execute them with both a comedic and menacing air is a testament to his skills. While his style hasn’t changed much throughout his run on Casanova it wasn’t until this issue that I noticed quite how continental his characterisation is. The simplistic yet expressive faces he draws feel, at times, reminiscent of Herge’s “Tintin”, but the slightly cartoonish element to his art doesn’t detract from the loftier elements of the narrative. Peter’s stripped-back palette helps to highlight the increased inclusion of the other-worldy element when it arrives. The dusky blues, browns, and greys of Casanova’s current world are invaded both in narrative terms and visually by explosions from another, inked in dangerous reds, oranges, and yellows. It’s this focussed execution of both visuals and narrative that helps bind the many seemingly disconnected elements of “Acedia” together.

As the story begins to ramp up a notch, expanding our exponentially in terms of characters and concept, it’s the creators’ obvious understanding of what made every previous arc of “Casanova” that keeps this train on the rails. “Acedia” is, at its core, a Whodunnit, with the ‘it’ in question simultaneously the impending and already occuring murder of Casanova Quinn, as well as the impending-or-potentially-occuring destruction of the entire universe. Why those two occurrences seem to be irreparably linked, and whether they may in fact be one and the same, has been the focus of almost every part of the “Casanova” series and is more than conpelling enough to hook in any fans of mystery.

Final Verdict: 8.0 – Perfectly paced and packed with charismatic characters, this issue throws the first hints at the full, multiversal potential of “Acedia”.