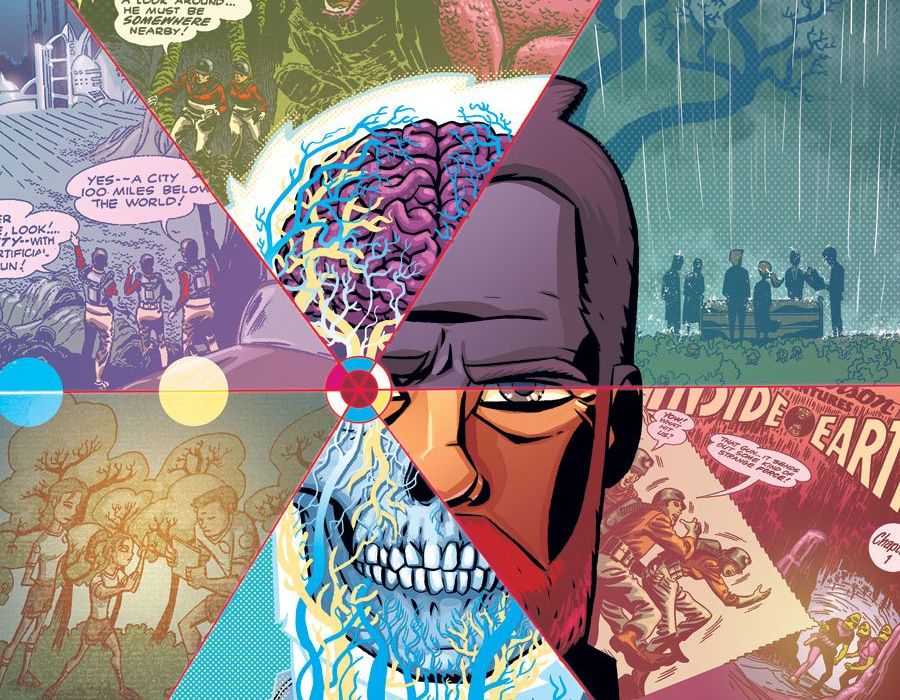 Three quarter’s of DC’s esoteric new imprint ‘Young Animal’ have now been released to the public, and ‘Cave Carson Has A Cybernetic Eye’ continues the trend of fantastic and fantastical alternative adventuring. 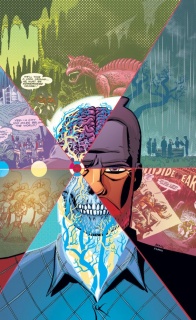 Cave Carson has done it all: survived countless adventures below the Earth’s surface, met the love of his life, and gotten a cybernetic eye…somehow. After he and his wife, Eileen, sent their only daughter Chloe off to college, Cave was ready to become just another mundane member of the surface world. That is, until Eileen got sick. Newly widowed, Cave tries to piece his life back together when a knock on the door of his secret underground lab pulls him back into a past that he and Eileen thought they had left buried deep within the Earth.

The big buzz over the past few months surrounding camp ‘Detective Comics’ has been all about their much heralded and well received superhero revamp ‘Rebirth’. But sneaking through the back door, ‘Young Animal’ has arguably brought about a much more drastic re-imagining of some seminal DC properties. Breathing life into some seriously strange characters who feel like they were created during the ‘anything goes’ era of the 60s and 70s, Gerard Way has already masterminded two issues of DC’s own super-powered teen group ‘Doom Patrol’ as well as supervising the creation of a whole new version of a classic character in ‘Shade, The Changing Girl’. Now it’s Cave Carson’s turn to get the treatment, and he certainly slots right into the wild and weird world Way is weaving.

Cave Carson is a semi-retired adventurer/man of science/recent widower who’s struggling to find his centre after the loss of his wife to illness, and his daughter to college. This issue jumps straight into the muted maelstrom of Cave’s life in a way that feels more emotionally driven than narratively so. We track despondently through interactions with Cave’s daughter, his work colleagues, and Dr. Magnus, self-styled ‘world’s greatest mechanical engineer’, in a way that beautifully establishes the important elements of Cave’s life while simultaneously showing us the way the lustre has worn from them. Cave is shouldering a burden, in the form of his eponymous, mysterious, ‘eye’. For as long as he’s had it the eye has been recording every moment of his life, but for some reason it’s started to fire out these moments at random intervals, resulting in memory ‘hallucinations’. While searching for a cure for his cybernetic conjunctivitis he’s confronted by an intruder from deep within the earth who brings a warning of danger bubbling beneath the surface.

Right off the bat it’s clear this book is anchored in the super-stylised side dimension that is the Young Animal line. While the tone is still very much different and distinct from the two titles that preceded it, there’s a recognisable sense of poetic prose and strong storytelling that links the books on a broader level. Something that really hit me about Rivera and Way’s script is just how viscerally they manage to embed the sense of loss, of grief, while still keeping the specifics delicately vague. There’s a sense of real, lived-in emotion at the core of ‘CCHACE’ that I’m confident will keep readers believing the drama no matter how silly and sixties the set-dressing becomes.

Oeming’s distinctive and expressive style really sits well within the world of ‘CCHACE’. I’m sure it’s been said a thousand times before, but he really feels like he’s tapped into the grown-up cartoonish stylings of the late, great Darwyn Cooke, and the resulting style feels both fresh and like a well-balanced homage to Cave’s sixties roots. There’s a lot of conversation in this issue, but Oeming seizes these chances to start subtly and stylishly constructing the world of Carson Cave. He plays out the surface world as cramped, and mundane, sumptuously supported by Nick Filardi’s stellar colours. Then, as we delve deeper into the depths of the earth the panels paradoxically open up, revealing warm and welcoming caverns with retro-futurist re-imaginings of EBX’s underground explorers.

Cave is a complicated man, and a courageous choice of protagonist for the fledgling franchise. His backstory reads like so many non-powered pulpy heroes from the 50s and 60s, a man of science and adventure who’s intellect is his greatest weapon. We’ve seen variations of this archetype for decades, but Rivera and Way confidently side-step cliche by taking great care to build up Cave ‘the man’ before they even attempt to tackle Cave ‘the myth’. There are nods to his previous exploits scattered throughout this issue, but they all take a backseat to Cave’s more human dilemmas, promising to rear their heads as and when the story requires a push towards ‘man of action’ territory.

This is definitely a slower book than the first issues of ‘Shade’ or ‘Doom Patrol’, but it’s clear that the meandering plot is laced with meaning, rather than lackadasical due to any lack of focus. The multiple story strands that all seem to vary hugely in importance and relevance, but all could clearly intersect at any moment, kind of remind me of ‘Dirk Gently’s Holistic Detective Agency’, and that same roundabout style of storytelling, driven by believable character and conversation, is exactly what is drawing me back to this book as soon as the second issue lands.