Muldroog is in dire straits as the saga of Cave Carson continues in “Cave Carson Has A Cybernetic Eye” #5. Read on for our review but be warned, there are spoilers within. 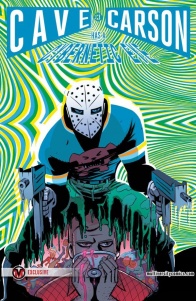 Written by Jon Rivera and Gerard Way
Illustrated Michael Avon Oeming and Nick Filardi
After agreeing to help defeat the mysterious being known as the Whisperer, Cave imbibes “Night Pudding” (a concoction reserved for only the strongest warriors and the truly metal) with King P’Thrall, while Chloe experiences the local scene with a group of subterranean teenagers. What could possibly go wrong? And if something did go wrong, it’s all good—because Cave knows some big league heroes who are just a phone call away, so… Plus: a new “Super Powers” tale by Tom Scioli!

The Young Animal lineup has proven to be just as good as what was promised. Of the four series, “Cave Carson Has a Cybernetic Eye” has stood out as the most personal story. Firmly situated in the weirdness that the entire line has been full of, “Cave Carson” is a family drama first and adventure second. That’s why it has been so successful and arguably the best of all the series that have launched in this line so far. “Cave Carson Has a Cybernetic Eye” #5 moves the plot along at a fast pace but takes time to reflect on the tragedy that has impacted this family so far.

Now deep in the Muldroog Paradise, Cave Carson gets reaquainted with his in-laws and Chloe gets up close and personal with Night Pudding and has fun exploring her mother’s homeworld. Cave has to deal with the loss of his wife all over again when he lets her parents know that she’s gone but what he really wants to find out is how Muldroog ended up the way that it did. He wants to protect the people who are left but is against a lot with a zealot and an explorer just as capable as him in Johnny.

As mentioned, “Cave Carson” is a real family drama and that’s so apparent in this issue in particular when Cave and Mazra’s parents interact. Rivera and Way allow all this weird stuff into their story but that isn’t the selling point, the characters and themes are. With “Cave Carson” #5, we watch as this family gets used to a new reality and all the bad that’s come with that. Cave’s sense of loss is felt more as he kind of has to relive losing Mazra again when he talks about her and Chloe with his in-laws. Chloe deals with learning of a world she’s entitled to be a part of that was hidden from her but unlike Cave, she gets to have a little more fun.

While both of these things and the impending doom that the last inhabitants of Muldroog, can come off heavy, there is a constant sense of humor at the core of this book. Way and Rivera never let things become too overbearing. They blend the humor with the adventure and the human emotion in a way that has kind of come to define the Young Animal line. There are some wickedly funny bits at the end of this issue involving Cave and the connections he used to have in the superhero community and Chloe’s very laid back approach to interacting with the young men of Muldroog is a ton of fun.

However, true stars of “Cave Carson Has A Cybernetic Eye” #5 have to be Michael Avon Oeming and colorist Nick Filardi. I’ve been a fan of Oeming’s for a long time and I think this is the best work he’s ever done. Oeming has a very distinct way of drawing people. They tend to have big eyes and slightly exaggerated proportions. With “Cave Carson” #5, he gets to experiment with drawing different kinds of people in Muldroog and monsters. He’s able to hold on to his style but pushes himself even further and goes even bigger than usual. The Muldroog Paradise isn’t really picturesque but instead feels like something out of an old science fiction movie. Oeming borrows from those old B movies and silver age comic books to create something so different from everything else in the DC universe. The creatures are very detailed and kind of scary. They’re gruesome and completely menacing so it forces the reader to have a reaction. On top of this, Oeming understands how to visually tell a story. His character react to each other in a heartfelt way and his dark inking works to provide the right kind of shadows this underground world needs.

Filardi’s colors continue to blow me away. There is nothing ordinary about “Cave Carson” #5. Despite taking place underground, he allows the inking to carry a lot of weight while he plays with bright neons. He bounces back and forth between creating pages that feel very conventional to ones that feel other worldly or even like a dream. His use of Ben-Day dots helps “Cave Carson” act as a throwback but because Filardi does such cool things like the all red sequences in the MM2, it doesn’t feel like a relic. “Cave Carson” becomes innovative through its use of alternating coloring techniques and unlike anything else I can think of.