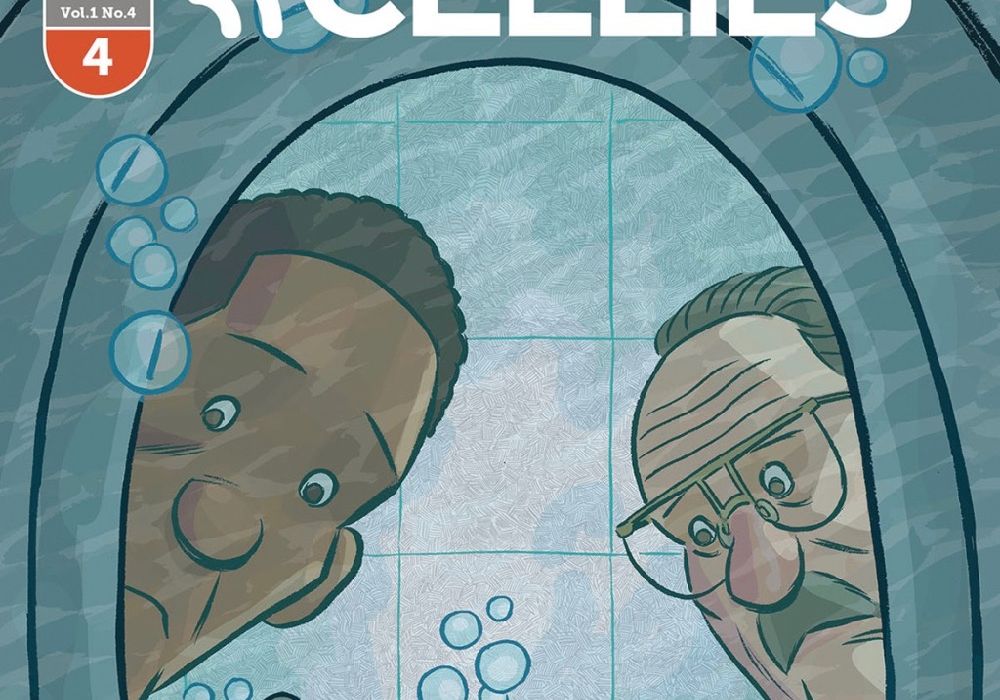 “Cellies” #1 marked an interesting start to the series. Follow up issues did a great job fleshing out the characters and setting the stage for action. In “Cellies” #4, it feels like we’re still waiting for something more significant to happen. (Warning: minor spoilers ahead.) 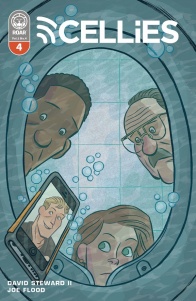 It’s Halloween season, when Seven Sails theme park’s Shocktober Nights rule! When Rey decides to ditch work and join her friends for spooky fun, she asks Devin to cover for her. One thing though: Rey’s parents are a little (read: very) strict! Devin must wait for Rey to rush to Jog Mobile by 9:00 p.m.—after closing—in time for her parents to pick her up. But Parker and her friends have other plans. Will Rey make it back in time? Can Devin keep her out of trouble?

Given the typically rigid, almost formulaic structure of the ever popular 5-issue trade paperback, I often wonder if there’s something of an “Issue Four Curse.” Creators seem to have no problem kicking off their series with a bang in the hotly anticipated debut issue. Generally, the second installment steps back to fill in some of the blanks and dabble in backstory, showing us why we should care. Issue #3 tends to raise the stakes, ramp up the action and set the stage for the first arc’s inevitable climax in issue #5 – typically the final chapter of the trade paperback.

Issue #4 is tricky. With a less obvious role than other books in the series, many creators seem to struggle, particularly with pace and maintaining dramatic tension. Given the ensemble cast nature of “Cellies,” creator David Steward II and writer/illustrator Joe Flood have made their job even tougher, since there’s not a single protagonist or obvious story line on which to be clearly focused.

For the most part, “Cellies” #4 centers on Rey, the teen Muslim girl with strict parents. On the opening page we learn it’s the first day “Shocktober,” a Halloween themed celebration at the local amusement park, Seven Sails. Sporting costume cat ears and black make-up whiskers, it turns out that Rey has convinced her coworker Devin to cover for her at Jog Mobile and wait until her parents arrive to pick her up at 9:00. To make things crystal clear, Rey says of her parents, “They’d be super pissed if they found me all alone in an empty store.” Moments later, she adds, “I mean…if I didn’t lie to my parents, I’d never be able to do anything.” Clearly, the stage is set for future conflict and the inevitable clash between Rey and her parents. Unfortunately, what we get between the opening premise and the final cliffhanger are some decidedly less interesting scenes that ultimately feel like filler.

Visually, “Cellies” #4 also bogs down in the middle. The open pages are great, with shapes, colors and layouts that really pop, especially the full page panel that dramatically pulls us right into the vertiginous center of a corkscrew roller coaster. Subsequent scenes, however, mostly take place in the store and can’t help but feel redundant. It certainly doesn’t help that artist Joe Flood’s color palette is artificially constrained by the orange polo shirts that Jog Mobile employees must wear. Maybe it’s a sly comment soulless uniformity contemporary retail environments (Target’s “brand ownership of red, Best Buy’s claim to blue and yellow), but on the pages of a comic book it feels unnecessarily mind numbing. For the most part, Flood does a decent job of accenting “Jog Mobile orange” with subtle blues and greens, but casually flip through the pages and your eye is inescapably drawn to the employees’ distinctive shirts.

Framing and camera angles feel similarly constricted, with a propensity of eye-level close-ups and medium shots. On one page, for example, six of seven panels feature remarkably similar angles on Parker (the so-called “privileged heiress”), with Devin essentially squeezed in as an afterthought, despite the fact that the scene is a conversation between the two. Later, inset panels of Rey’s phone only show us her thumb, the time, her dwindling battery power and a blank smartphone screen, which can’t help but feel like an overly literal – and linear – waste of space on the page.

To be clear, there are many things to like about “Cellies.” In issue #4, however, visual dynamism is clearly not one of them. The overall “slice of life” vibe and richly imagined characters provide multiple points of entry for fans of all ages and interests. Like the Lion Forge line as a whole, a definite feeling of authenticity and relatability pervade this series – not to mention representation – and all of that matters. The team deserves credit and praise for realizing their vision. That said, the book also fails to capture – and leverage – the full power of visual storytelling contained in contemporary comics. As much potential as the series offers, it falls short artistically. Hopefully, in “Cellies” #5 the creators cut loose on the page.

Final Verdict: 6.3 – A bland visual treatment and general lull in the action drag down the fourth issue of this otherwise promising series.