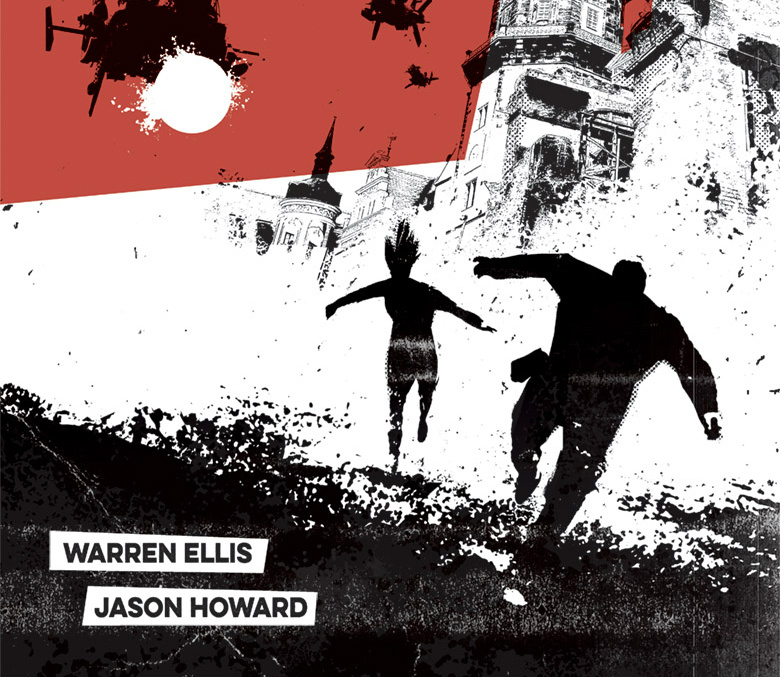 The great Warren Ellis has quietly become one of the most important comic book voices of his generation. He has the talent and gravitas of his contemporaries like Alan Moore or Grant Morrison, but also a gruff charm and plainspokenness that makes him more accessible. The Ellis bibliography ranges from high concept (“Transmetropolitan”) to superhero opera (“Doom 2099,” “Moon Knight”). He’s done books that are utterly serious and political (“Trees,” “Global Frequency,” ‘Shoot’) and… not that (“Nextwave,” good lord “Nextwave”). His latest series “Cemetery Beach” lands right in the sweet spot. It’s high concept yet simple, political and zany. It’s a strong showing for a first issue and if the series continues down this path, we may have reached peak Warren Ellis. 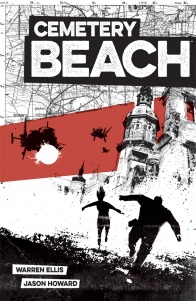 From the creators of the acclaimed TREES graphic novels, which are currently being adapted for television, comes something completely different. A professional pathfinder, his only ally a disaffected young murderess, breaks out of a torture cell in pursuit of his worst extraction scenario ever: escaping on foot across a sprawling and secret off-world colony established a hundred years ago and filled with generations of lunatics. WARREN ELLIS & JASON HOWARD ignite a high-speed new action serial.

While “Cemetery Beach” has a complicated premise, the execution is quite simple. In the 1920s, a group of industrialists- presumably your Rockefellers and your Carnegies and your Astors- discovered a habitable exoplanet. They colonized it. Now, a hundred years later, a spy named Michael Blackburn has been sent from Earth to investigate this strange planet. He’s captured. He escapes. Now he’s on the run on an unfamiliar world. That’s it.

Ellis is a master of comic book storytelling, which means he leaves a lot up to his artist Jason Howard. You can tell that Ellis trusts Howard utterly because almost half the issue contains little to no dialogue. That makes the book a challenging read. A lot of new comics readers sort of skim long sections of silent artwork and I will admit I found myself doing that at first. But slowing down reveals not only that Howard knows his business but that this creative team has thought hard about this world. I ended the issue filled with burning questions.

The point of divergence seems to be the 1920s. Since then, this colony has developed on its own. There’s a great scene of bouncy dialogue as Blackburn explains a smartphone to his interrogator, who scoffs in disbelief. And yet, this planet is filled with all sorts of fascinating and advanced flying vehicles. In the hundred years of this planet, computers haven’t developed much but aerospace has. Is this because of how thick the atmosphere is? What they use as fuel resources? Those are the kinds of questions “Cemetery Beach” provokes. How is it that there are flying motorcycles and typewriters?

These aren’t just idle stylistic choices. Everything from the landscapes to the fashion seems to be rooted in an alternate planetary history. Blackburn and his new partner in crime Grace Moody are a perfect duo to be exploring this strange world. Blackburn is a goofy action hero in the mold of Kurt Russell, and Moody is a punk rock murderer who’d look at home in Fury Road. This is a planet of madness, and we’re going to explore every facet of its strange society. And if the last few pages are to be believed, the leaders of this planet have reason to want to remain isolated from Earth. High concept, simple conflict.

This isn’t Ellis and Howard’s first collaboration, and there are a lot of stylistic similarities to be found to “Trees.” Howard’s combines scratchy, scraggly line-work with simple faces and expressions. The backgrounds look like ink was spilled, dried, and cracked. It’s busy and at time nauseating. But the characters and clean and bold. This creates a strong foreground/background contrast. It’s easy to follow the people because they are so much less busy than the environments they walk through. This always makes Howard’s work feel a little bleak, but that works well for this book. This planet is a terrible place, but we’re going to have a fun time picking through the muck and grime. It’s as if John Carpenter adapted the Borderlands games.

Howard’s technical prowess also offsets some of my personal distaste for his style. The first moment you see the planet as a whole is a beautiful two-page spread with more impact than any I can think of from the last year of comics. The painterly quality to the purple sky further proves that Howard has range, and makes you want to deeply analyze his choices. The contrast of vertical and horizontal movement gives the painted landscape momentum, which is important when half your issue is wordless.

As a first issue “Cemetery Beach” impresses. It’s another weird and slightly grimy sci-fi book from Ellis. But it has something missing from Ellis’ last few efforts- swagger. Blackburn and Moody are crazy quipping lunatics. We connect with them because everyone else seems even crazier. This world and all its problems are clearly being set up to explore issues of politics and the human condition, but not without a couple of flying car chases and shootouts. The issue draws influence from the entirety of Ellis’ career. I’m more excited to see what he has up his sleeve than I’ve been in years.

Final Verdict: 9.0 – A heady, smart first issue that doesn’t forget that some people like action scenes along with their political pontificating.