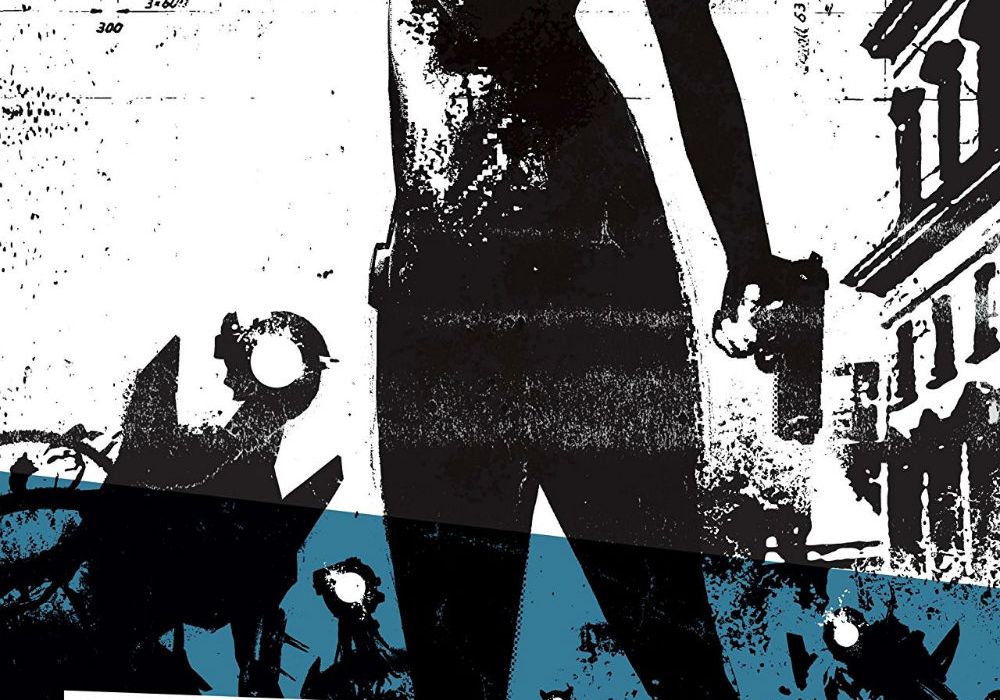 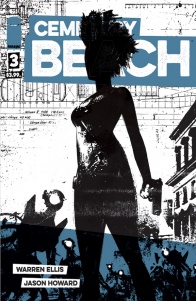 President Barrow has created his perfect society on an alien world. It’s been running smoothly for a hundred years. But now he needs to catch Mike Blackburn before he can get back to Earth and tell them what it’s built on.

Issue #3 doesn’t let up from the first two issues’ frantic pacing until the very end. Along the way, we see more of the city, meet some delightfully gross murder bugs and learn the secret to the colony leadership’s longevity. The wordless action scenes continue in this issue to great effect, and the last few pages see a bit of a breather from the violence to dig into Mike’s backstory – but not without Ellis’s usual brand of humor.

The trademark Ellis wit is in full swing, with snark dealt by Mike and Grace and from the mouths of the increasingly bizarre cast of characters intent on their destruction and, probably, dismemberment. In this issue, the Outerfamily makes their weird, spindly debut and seem to feel really strongly about ripping Mike’s limbs from his body, and there’s a great final strip midway through the book that showcases the kind of ghoulish humor we know and love from Ellis.

When it comes to humor, I can only handle small doses of quippiness. Whedon-ism is very popular and extremely annoying because when sarcasm and cuteness are used for their own sake, there’s only so much depth you can pull out of a character as a reader. Eventually, if there’s nothing else on the page, books fall flat and feel artificial. “Cemetery Beach” reminds us that Ellis, the master of this particular craft, knows when to pull back. Issue #3 ends with some more serious insight into Mike: we learn why he’s here, what he has to lose (hint: nothing) and in just a few panels we begin to get some insight into this bleak, not-too-distant future. In short, the humor in this book feels like an earned defense mechanism for these characters instead of a superficial narrative style choice. Well done.

“Cemetery Beach” is a good example of how to run an action comic at a breakneck pace and build out a sci-fi world primarily through the book’s art. Ellis keeps a tight hand on the narrative detail and we’re instead treated to some heavy visual mapping, which suits me just fine because Howard’s style is fantastic for this kind of journey: angular, fine and precise enough to give lots of space to the action lines that explode on each page. They also break the frame ever so slightly to soften the panel borders and avoid a more clinical style, which would detract from the book’s action spots – a nice subtle touch in a not-so-subtle comic.

Character faces and expressions are fantastic, with chiseled jaws and cool clothes balanced by wide eyes and just a touch of cartoonish silliness, especially for Mike. Grace’s face is a series of balanced triangles, and her lips occasionally sport some ink shading just a little outside of their natural line. Small details like this, carefully chosen and placed as they are, lend a cumulative roughness to Howard’s careful work that’s deceptively casual. Put another way, there’s a huge difference between a narrative that’s out of control and craft that’s gotten away from creators, and “Cemetery Beach” is a great example of how to keep the energy high without sacrificing quality.

Howard’s colors are equally sophisticated, with cool blue and purple backgrounds to balance the brighter reds and yellows in the myriad explosions as Mike and Grace race to break through the wall. Extended action scenes can be hard to follow if the color work is flat or the inks too heavy, and Howard uses textured backgrounds, shading and subtle light sources to give each panel balance and visual variation. Without this close attention to detail, the art could easily overwhelm and the book would be a chaotic mess instead of a well-controlled tightrope act.

I appreciate the touch of cartoon styling in the lettering as well. The typeface is tall but gently rounded, which is a great contrast to all of the spiky, explosive goodness in each panel. Ellis’s style can be talky, but when it is it feels like a welcome break in tension from the largely wordless chase scenes. The balloons have very thin borders, which also suits.

Overall, Ellis is building an interesting world in this comic, with a slew of cultural touchstones jammed together – there are the Kipling and Conrad-esque colonialism of it all paired with Gibson’s cool svelte wise-crackin’ future female, and even some Carpenter thrown in for good measure. The balance is right because the comic feels informed by a lifetime of consuming various forms of media and culture instead of a direct send-up, and that’s Ellis at his best. “Cemetery Beach” is vibrant and well-constructed, even though some of the world-building might not make it onto the page in the four issues that remain.