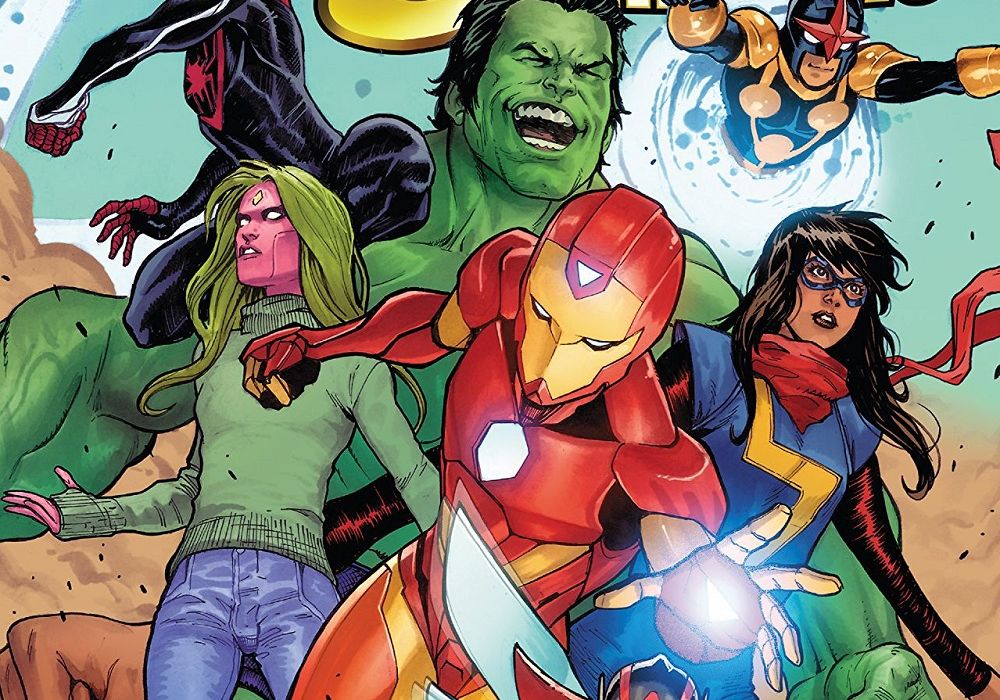 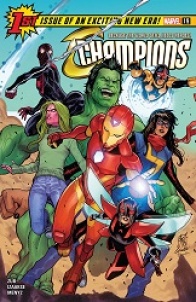 Cover Stefano Caselli & Tamra Bonvillain
Written by Jim Zub
Illustrated by Sean Izaakes
Colored by Marcio Menyz
Lettered by Clayton Cowles
IRONHEART and THE UNSTOPPABLE WASP join the Champions at last! The team has grown but the mission stays the same – the Champions fight to make the world a better place for all! Writer Jim Zub (AVENGERS: NO SURRENDER) and artist Sean Izaakse (UNCANNY AVENGERS) reunite to push the Champions beyond their limits with any icy Antarctic adventure that will challenge everything they believe in! Don’t miss this first chapter of a new era of Champions – and the birth of a brand new hero!

As another line wide refresh for Marvel looms on the horizon, “Champions” gets its own under the pens of writer Jim Zub and artist Sean Izaakse with Marcio Menyz on colors. Zub and Izaakse add a lot to the team in these 20 pages. Riri ‘Ironheart’ Williams and ‘Unstoppable Wasp’ Nadia van Dyne have both joined, and the team has built their own mobile command center. The new creative team isn’t doing a major overhaul of the teams core mission statement of being a more proactive and progressive force in the Marvel U judging by this issue and a letter from Zub in the back. Issue #19 isn’t a radical reorganization, but it is an effective pallet cleanser as the new creative team try to get a fresh start with the series.

With the creative unsaddled from the baggage of having to reestablish a team, bring it together, and ultimately make the case for itself, the issue is allowed to just be another issue. Other then Nadia and Riri joining the team off panel, it is another day at the flying offices for the team. When a G.I.R.L. information drone goes offline in the Arctic, it’s the perfect excuse to take the new command center for a test drive and check things out. The frictionless plot setup lets Zub begin setting up the thing that will carry the book long term: the character relationships.

The easy setup allows Zub and Izaake to explore the new team dynamic by positioning Riri as something of a point of view character. It isn’t a Wolverine discovers the X-Men situation, but the emphasis on her anxiety about doing the whole team thing is the kind of cue that will hook new readers in. Anchoring one of threads for this arc to that emotional note, is smart, effective, writing. That friction about belonging in a new group is easily translated across age ranges and the kind of emotional note you find in plenty of idealized teen stories.

Riri’s anxiety and desire not to screw things up is causing her to isolate herself from the rest of the team, literally with a “Keep Out” sign taped to her door. Izaakse’s does a skillful job at visually isolating Riri throughout the issue. When Kamala Khan goes to check in on her, and finds her still tinkering away, they are separated from one another either via panels or shown in a panel that emphasized distance. Perhaps the best version of this is a panel wherein everyone is taking a vote on what the mission should be and they’re all looking at Riri as she tinkers with an Iron gauntlet, ending on a two panel beat. I wish that panel had been bigger, it’s the emotional beat of the page but is the smallest in terms of height. The page construction itself makes sense, the perspective slowly pushing in to Riri noticing the world around her at the same time it has to fit in the exposition setting up the plot.

These visual cues lay the ground work for Zub to tackle Riri’s feelings more directly and allow the moment where that isolation begins to melt away have impact. It’s a long flight to Nunavut, Northern Canada which means there is plenty of time for them to sit around and talk about their feelings like it’s Mass Effect. Unlike a debrief in Mass Effect, the conversation between Riri and Viv has excellent flow and is visually interesting. Viv continues the Vision tradition and doesn’t respect doors, but she still knocks. Izaake dose a good job of using Viv’s intangibility to let her float through Riri’s room and panels, which makes for a visually dynamic conversation as Riri begins to open up. As Riri opens up to Viv and the scene climaxes in this beautiful image of Viv half-phased through Riri’s armor as they come to a conclusion about the nature of the Champions and the friendship. Throughout the scene Viv is passing through the walls Riri has built up. It cements this emotional tether for this arc as things begin to go sideways in the following pages.

The thing that has impressed me most about “Champions” #19 is how functional it is. It simply reads like a well crafted comic book where words and pictures work in unison to connote greater meaning without much friction. Izaake’s design work reads as traditional Marvel, with good action poses and expressive faces. The thing that makes this book read so traditional is likely Marcio Menyz color pallet. He just jams everything in with solid vibrant colors offset by midtones for shading and depth. Izaake doesn’t really put a lot of inky black in the page, most of which is there due to costume designs. His functional page designs create a book that is easy to read. All of these elements make for the kind of book that is perfect for newer readers in general and Marvel in particular as it constitutes a kind of baseline for Marvel overall.

That functionality is also why it seems that Zub and letterer Clayton Cowles go a tad overboard on the onomatopoeia when the lasers begin to fly. Panels are already being filled with laser beams you don’t need to fill it also with “voorps,” which just take up space and busy and already busy image.

Final Verdict: 7.5 – “Champions” #19 gets a new start under the leadership of Jim Zub and Sean Izaake, who craft a functional and emotionally grounded beginning to the teenage superheroes trip in the great white north.