Living and working in New York City can be tough. Being a struggling actor in the city can make life nearly impossible. Being a vampire hybrid on top of all that is damning. Some Spoilers Ahead 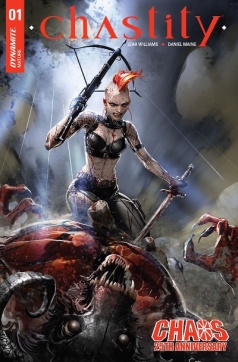 Chastity wants to break out of her routine. She wants to get a legitimate acting career going, but endless auditions are leading nowhere and she is stuck spending endless nights performing in seedy clubs doing burlesque shows. And when she isn’t dealing with trying to make ends meet, she is hunting legions of the undead. Vampires are everywhere and her special condition is what allows her to hunt them.

Born a half-human/half-vampire, Chastity was once a gymnast with her sights on the Olympics, but now she hunts. She has all the abilities and strengths of a vampire, with none of their weaknesses. Which makes it sound like she should have the upper hand in all circumstances, but she and her powers aren’t perfect. She is half human after all.

After a typical night of kicking undead ass in the subway, our hero remembers she is late for another audition. It’s nothing special, but it’s work. She uses her super speed to rush over and get into the waiting room before the auditions close for the night. Once she gets settled in and starts chatting with the other women waiting along with her, she slowly begins to realize something is off. She is tired from her fight earlier, so her vampiric senses are a little slower than usual. Once she is certain that something is amiss, it is too late, and the time to fight back is now or never.

This premiere issue is a great reintroduction to a character that has shown up on and off since 1995 as a guest star in other comics, as well as starring in her own series. After moving from Chaos Comics to Dynamite Comics in 2014, this is the second time Dynamite has started up a “Chastity” title. Luckily for the readers Leah Williams (“Gwenpool Strikes Back”) takes on the writing duties here and quickly gets new readers acquainted with the character and her world, while moving at a quick, yet evenly paced clip for anyone interested in picking up this newest arc.

Williams’s script is perfectly to the point and moves at an excellent pace for an action comic. We are never drowned in exposition, nor are we left needing more story text or dialogue. It gives us every bit of information necessary to understand these characters and their story. She also gives Chastity a nice dry wit without making her unbearably snarky. We can still relate to this character, which is a tough thing to do when it comes to a super-powered, mostly undead, vigilante.

Right from the start, the premise feels far too familiar: female vampire hunter with special powers, and she is part vampire as well. It all felt too similar to both “Blade” and Buffy the Vampire Slayer, for obvious reasons. However, even with all of those similarities, it does stand on its own enough that after the first few pages there is no need to compare it to those characters and it is easily enjoyable throughout.

Daniel Maine’s (“Blue Devil”) artwork is well done and decently detailed. It is mostly simple in its depictions, but not lazily so. Like the script, all information we need is laid out for us without any extra flourish. It works and it isn’t trying to more than it is. I do like his focus on characters and important objects, leaving the backgrounds to be less detailed and even blurred out during action scenes. This focus really becomes apparent with the color work done by Bryan Valenza (“Witchblade”). He gives each layer a nice dynamic color palette with nicely executed shading throughout. When it comes to a background or environment that is a little less than important, he leaves Maine’s details alone and just colors them in mono-chromatically and moves on. Nothing ground breaking, but again, it fits this comic. There is more to it than most other B grade comics and having a creative team that understands the more grindhouse style nature allows to elevate the work by being in on the joke and not perpetuating weak material by being the joke.

It isn’t the greatest horror comic of its kind, but it knows its job as a light and entertaining read. It stands above a lot of the other comics of its kind getting produced at Dynamite, and elsewhere. With a relatable and strong female character who may be stuck in a job where she’s eye candy, but isn’t drawn solely as such for the reader is refreshing.

Final Verdict: 7.5, A surprisingly exciting horror/action comic with a fun hero and an unexpected plot that makes for an intriguing read.