Ngozi Ukazu’s energetic “Check Please!: #Hockey” tells the tale of Eric “Bitty” Bittle, a vlogger, a pie enthusiast, and a member of the incoming freshman class on the Samwell University hockey team. He can skate like a dream (he has a figure skating background) but he’s deathly afraid of being checked. Worried that he’s not pulling his weight on the team due to his fears, Bitty considers quitting it but he knows he needs the sports scholarship to stay in school. Faced with the reality of being checked on the ice but being able to stay at an LGBTQIA-friendly school or quitting and needing to go back to the less accepting small town Georgia environment he grew up in, Bitty chooses to ride the checks out. 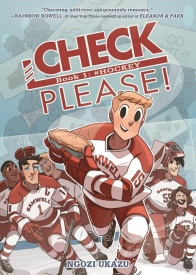 The teen and young adult appropriate “Check Please! : #Hockey” makes the jump from webpage to bound book in this humorous and lighthearted tale of friendship, identity, and rising to the challenge. In the process, it tackles breaking stereotypes and expectations about who does, can, or should participate in activities where success is measured in machismo.

The story presents as cheerful and optimistic, and it overwhelmingly is almost to a fault. Although it contains dark elements like anxiety from high pressure situations, prescription drug abuse, overdose and rehab, and general concerns about life as an adult after college, it doesn’t dwell on them. Instead, Ukazu focuses on the familiar and fraternal bonds between the teammates, which are infused with hazing rituals, horsing around, and humor. While this serves to make the story lighthearted and appealing to those wanting a purely fun or escapist reading experience with little emotional drag, this approach does keep the reader at arm’s length from what could be the meat of the story. The depth that exists is real and just significant enough to keep it from being too flippant but it is also glossed over and in some ways, comes across as subsidiary despite being intentionally included and important to the story moving forward.

Bitty is a likeable character who embodies charm and male delicacy, but despite being a gay, hockey-playing former figure skater who expresses his emotions via the pies he bakes, his love interest Jack has the more compelling story, even if it appears at a glance to be more typical of those who are considered to be average hockey players. Despite not being the main character, the two sets of flashbacks included in the story both depict life-changing moments of Jack’s, and not Bitty’s, life.

This may be due to Bitty leading a closeted life before college and having his life-defining moments occur before the reader’s eyes but he is still outshone by Jack’s past traumas and drama. It’s no secret that Jack is also gay or bisexual but if there’s widespread knowledge of Jack’s sexuality among his friends and family, it’s neither obviously shared with the reader nor treated as a big deal. Instead, Jack’s life outside the hockey rink is treated as secondary to his attempts to follow in his famous father’s footsteps as a professional hockey player. Both Jack and Bitty, however, are compelling examples of resiliency and overcoming expectations. Remaining characters – two of whom appear to be ethnic minorities – offer comic relief and exaggerated behaviors which border on but never cross into those of caricatures. More specifically, Shitty is a fun addition to the team who demands the perfect amount of attention at just the right time.

Something else of particular note is the story’s authenticity of speech. Ukazu has a knack for infusing characters with individual and believable speech mannerisms and practices, even as their behaviors are exaggerated and over the top. The language used, while crude at times, seems incredibly realistic to the group being portrayed: college student athletes.

The layout of the book is comprised of two parts, roughly 100 pages each, that cover Bitty’s freshman and sophomore years in college. Both parts move quickly, offering snapshots of his time at school while hinting that there’s quite a bit happening – albeit it everyday things that are inconsequential for story progression – that readers are not privy to. Many of these things that take place offscreen of the story’s pages are in fact included in the back matter’s 36 pages of tweets that refer back to the events of the story and, in some cases, expand upon it. While a majority of the tweets are entertaining, many aren’t necessary to the reader’s understanding of things and are instead fun, fluffy extras that readers can leave or take. The story’s episodic feel, with chapters that are consistently four to five pages in length, can likely be directly attributed to its beginnings as a webcomic.

Individual pages feature a uniform layout, with ample white space provided via sizable gutters and panels that range in quantity from two to seven panels total, but that do not stray or vary in their overall layout or presentation. They consistently retain the same standard rectangular footprint on the page and the same amount of space they consume.

Soft, flesh-and earth-toned colors are used throughout, as are soothingly pale blues, yellows and oranges. These colors contrast nicely with the angular lines of the various character designs and the deep red color of the team’s uniform. Regarding the general level of detail, more often than not, Ukazu provides some detail in the backgrounds but there is a healthy mix of basic solid and striped color backgrounds smattered throughout that keep the focus squarely concentrated on the incredible character expressions. Comparatively, while both styles succeed, the flashback art, which does not feature lineart/inking, looks less processed and more intimate.

The back matter also contains 29 pages of extra mini-comics that couldn’t quite find a home within the overall story arc but which provide fun miscellaneous glimpses at the mundane rituals of the group.

While the story isn’t perfect and occasionally loses sight of itself in favor of squeezing in more jokes, it is incredibly endearing in its optimism and its celebration of self. It leaves the readers with hope that its follow up will more squarely face off with the depth it glazed over here.