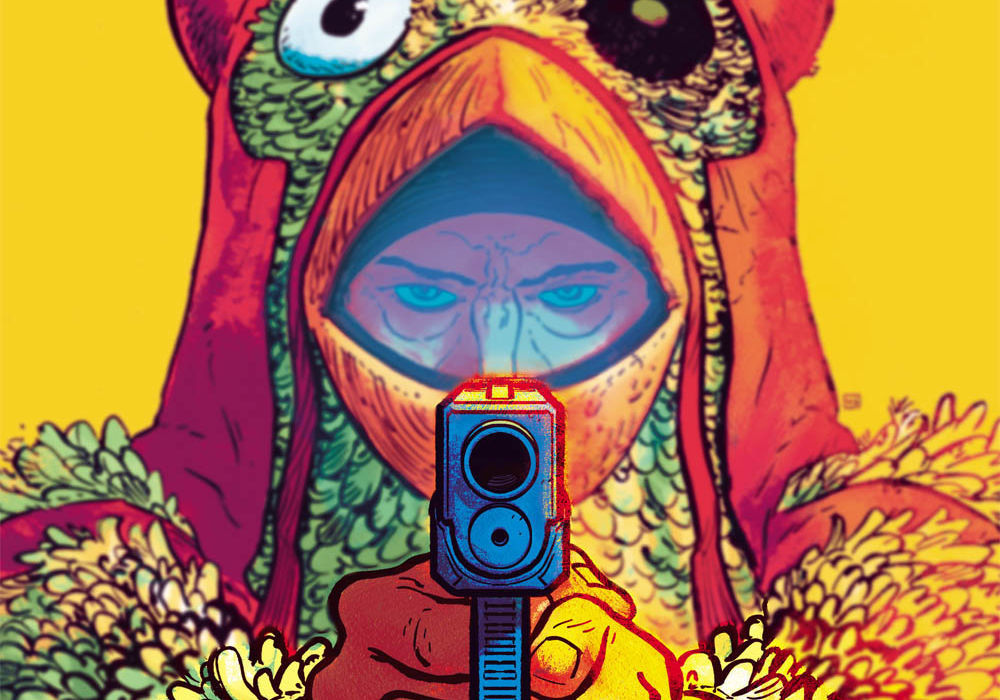 “Chicken Devil” #1 from AfterShock comics is full of violence, high-lunacy, glitteringly good illustration, and a plot just wild enough to pull us in for the long haul. In other words, it’s finger-licking good. Think Sin City meets The Big Lebowski meets Hobo with a Shotgun meets…a McDonald’s commercial, I guess? “Chicken Devil” #1 is part super-hero (or super-zero) origin story, part action/mob thriller, and all madness. Let’s break into this spicy wing of a story and figure out what’s going on. Warning, some spoilers lie ahead. 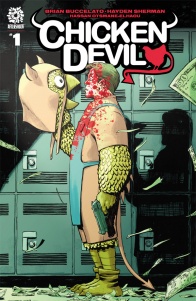 Mitchell Moss is about as regular as it gets. He’s married with two children, and co-owns a successful chain of Memphis Hot Chicken restaurants. It’s not the life that screams hero/vigilante…until he discovers that his business partner is in bed with the mob and owes them $2 million. Unfortunately, Mitch is ill-equipped to be a badass—he’s just a guy who makes really good chicken. Can he protect his family from cold-blooded gangsters? Absolutely not.

But maybe the CHICKEN DEVIL can…

We start our vaunted tale in Mitch Moss’s home in Eagle Rock, California. He’s making coffee, and his family is going ape shit. His wife is nagging him about vacation plans, one daughter is moaning about Coachella plans, and his son has an insatiable appetite for french toast sticks (can we blame him)? Basically, Mitch has accomplished the American dream, and has constructed a family based on love, faith, and mutual understanding (this is sarcasm). Things go fine until Mitch gets a frantic call from his business partner. What starts as anxiety over a merchandise fire turns into a revelation that Antonio, his partner, has gotten in deep with the Russian mob over some stolen heroin, and now owes them millions of dollars. Oops! We all have those days.

While the above premise is mostly normal, save for the fact that it revolves around a hot chicken franchise, things really heat up in the second act. In order to deal with the mob problem, Mitch tries to ferry his family away on a yacht for vacation. Plot twist: after he puts his beloved and annoying family on the boat, it promptly explodes in a ball of fire. Yikes! This moment feels like our real introduction to “Chicken Devil” #1. When the family incinerates in the first half of the first issue, you know that all bets are off. When that happens, “Chicken Devil” #1 is telling us that it’s taking us to hell and back, and then to hell again once we get too comfortable. In essence, this story will cook us.

But that doesn’t mean it’s nihilist. “Chicken Devil” #1 is also really funny, and has some self awareness that what’s going on is over the top. The dialogue feels contemporary and humorous in a dark comedy kind of way and not in an edgy, cops LARPing as The Punisher kind of way (hopefully someone gets what I mean by this). In “Chicken Devil” #1, jokes get cracked as often as heads to, which is to say quite often. In a prior interview, Buccellato talks about the energy he’s bringing to “Chicken Devil” #1, and you definitely get a sense form the first issue of the story that there will always be real stakes, and that things will never go so off the rails that the reader stops caring. It’s working so far, let’s hope the team can keep up this energy in further issues.

Before getting into the art in “Chicken Devil” #1, which definitely delivers, we should spend some time talking about the lettering. Otsmane-Elhaou enters the fray guns blazing, plastering big, bold, and dynamic fonts across the story. Nothing is ever illegible, but all the words in “Chicken Devil” #1 have a little larger than life, bombastic attitude. On top of that, certain panels have scribbling on them: either character/object labels, emphasis marks, the kinds of things that look as if the author drew them directly onto the finished project in a breaking the 4th wall kind of way. The visual effect of this is actually helpful: there’s a lot going on in some panels of “Chicken Devil” #1 so a group of arrows with the word HEROIN written above them do wonders. From a more overall, aesthetic perspective, the page scrawling gives “Chicken Devil” #1 more of that unhinged, balls to the walls flair that’s so apparent in ever other aspect of the story.

While Otsmane-Elhaou delivers on the lettering, Sherman absolutely sucker punches the illustrations in “Chicken Devil” #1 (this is a good thing). The art style is reminiscent of oil pastel painting with thick lines, swaths of color, and a kind of grimy, glitzy gloss that feels like seedy California. This, paired with the frequent use of reds and yellows, makes the whole thing feel like it takes place in a fluorescently lit fast food joint. Granted, some scenes DO take place in fluorescently lit fast food joints, but keeping that vibe up for an entire issue is quite the feat. In truth, “Chicken Devil” #1 is a cavalcade of color, and while “fast food” might not be a color palette people usually find appetizing on a conscious level, who are we to deny the unconscious pull of that rest stop burger? They all use red and yellow for a reason, you know. The point here is that the art in “Chicken Devil” #1 pulls you in, whether you like it at first glance or not.

While “Chicken Devil” #1 is excellent, it’s not without its faults. Sometimes the action gets too frenetic, and the panel organization goes a little too haywire for our own tastes. But that’s the price of ambition. We’ll take a few panel integrity whiffs for the tradeoff of some beautiful full page splashes and a raucous story.

Final Verdict: 8.5. Spicy and furious, this story pulls punches and doesn’t stop until you’re battered to a pulp, and then some.