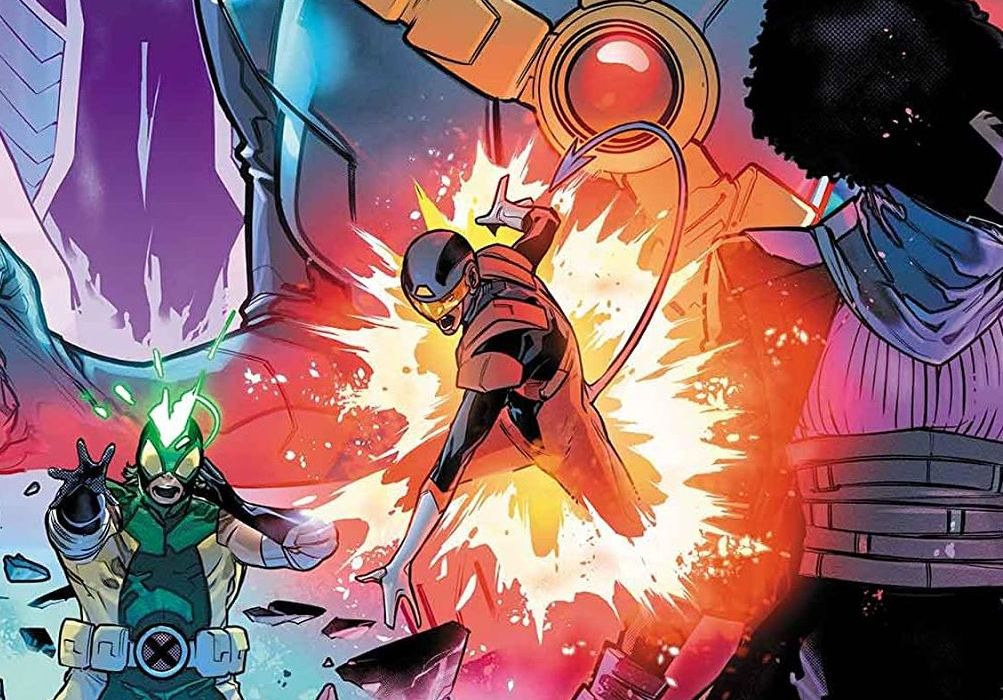 Of the possible stories in ‘Dawn of X’ era, it was intriguing to think about those who stayed behind and didn’t take advantage of the peace of Krakoa. There were plenty of angles ripe for exploration, mutants in loving relationships with non-mutants, mutants who were taking care of sick family members, hell, even mutants who just didn’t trust Xavier. It felt like there was a lot of material to work with there. In “Children of the Atom” #1, Vita Ayala and Bernard Chang take a memorable and unique angle to that idea, creating a strong first issue and creating a must-read series. 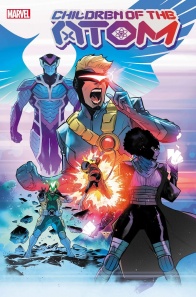 WHEN DID THE X–MEN GET SIDEKICKS?! Now! Don’t miss the debut of the greatest teenage super hero team of all time! They’ve learned from the best, now they’re ready to be put to the test! But who the heck are these kids, and where do they come from? Guest-starring the X–Men!

One of the things that makes “Children of the Atom” #1 so strong is Ayala’s characterization of the new team of mutant teens. The majority of the issue is narrated by Buddy, aka Cyclops Lass, a perfect combination of anxiety and teen angst, who talks about feeling isolated and alone but finding purpose when seeing the X-Men for the first time. Ayala does a wonderful job making Buddy endearing and sympathetic while also creating some truly delightful banter as the team fights with The Hell’s Bells. Not only is this first action sequence a great way to introduce the characters, but it also shows just how well this team works together. The team has a natural camaraderie, a well-oiled crime-fighting machine looking to protect the name of mutants as the world descends into conspiracy theories and fear of the mutant nation. When Buddy says that Carmen, Benny, and Gabe were her best friends, were her ability to form connections with others, you believe it thanks to the powerful introduction. These heroes have one another’s backs. It’s a fun introduction to these new characters, but things start to become interesting as the issue progresses.

A significant part of “Children of the Atom” #1 is determining why this team of mutants hasn’t come to the mutant nation of Krakoa. Two major moments help to build some mystery around the team of Cyclop-lass, Gimmick, Cherub, Marvel Lad, and Daycrawler. The first is their interaction with Pixie, Magma, and Maggott, who try and recruit them to Krakoa. The team is quick with excuses, that they are busy with school, that there are other things they have to address, but there is a subtle moment when Cyclop-Lass talks about hearing “the call” where it seems that Buddy isn’t telling the whole truth. While this might not be the case, Bernard Chang draws the team with some subtle body language suggesting that they are lying about actually hearing the call in the first place. The mystery continues to build as Cyclops, Jean, Storm, Nightcrawler, and Wolverine debate how to handle the group in the Summers’ moon home.

The writing in this section of “Children of the Atom” #1 is especially strong, with Ayala nailing the characterization of those involved. All of the characters make valid, reasonable points about the best way to invite the team to join Krakoa. There’s a discussion of the increased risk of being a mutant while also violating laws outlawing teen vigilanteism. Others counter about how joining Krakoa has to be a choice. It’s something that has to be an individual choice. Of all the arguments, the one that felt the most meaningful was Wolverine. Not only does he argue that helping young mutants is their forte, he argues that perhaps they haven’t done a good job letting these heroes know that they have a place here, that they belong.

While Wolverine still uses his usual blunt language, you can feel he stands by what he’s saying. The through-line of “belonging” through the issue is impactful, and Ayala does a fantastic job showcasing what it means to each character. There’s also the added fun of these meaningful conversations happening during a pool game. While chess is a two-player game of strategy, pool is an ever-shifting and changing game of strategy with multiple people. In many ways, a pool game reflects Ayala’s way of writing discussions and arguments. It’s a constantly shifting landscape with people adapting their opinions to match one another’s points. The art also enhances the impact of this conversation. Bernard Chang takes full advantage of the page layout, using the sound and movement of the pool balls to show the flow of the conversation, which does a lot to show how these characters view the promise and mission of Krakoa. It also helps to build the team’s mystery, namely that Cerebro can’t detect them.

“Children of the Atom” #1 lays out several fun twists and turns as the issue progresses. This culminates in the final twist when Buddy and the team can’t enter Krakoa. It raises the interesting idea that perhaps they weren’t mutants at all, making some of the pieces fall into place. For one, all of the names and character designs feel inspired in some way by classic X-Men, like Cyclops, Gambit, Jean Grey, and Nightcrawler. While there are certainly characters who share similar powers, they seem closer to loving homages instead of new characters. Bernard Chang’s design of the costumes helps to sell the idea of “tech-based copying” on the second reading of these comics. These characters might identify as mutants, might feel camaraderie with mutants, but their gifts might not be biological. They might not have the X gene. If this is the case, it’s certainly an interesting angle to explore the role of mutants in the world. We know that Buddy runs a mutant wiki (used primarily for fanfiction) and is an ardent defender of mutantdom, but is also an outsider looking in. It will be interesting to see just who these characters are and how their story impacts Krakoa. Are they just mutant fans? Is there some missing piece to the puzzle? For the first time in a while, the mystery of a first issue landed the hook.

While a lot was going on in “Children of the Atom” #1, it was well balanced. This goes back to that throughline of belonging, which is a strong theme to anchor a book. Combine that with some slick action, cool visual designs, and characters you want to root for, and you have a memorable premier issue.